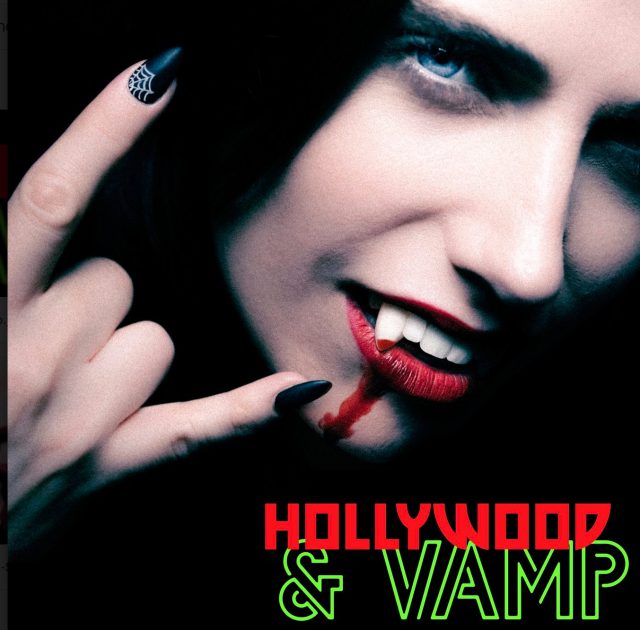 A Halloween Immersive Experience Turns Bloody Rock Show in One of a kind mid-week haunt experience!

Los Angeles, Calif. – Announcing HOLLYWOOD & VAMP, an immersive theatrical show experience like no other — taking audiences into the unsettling underworld of vampires and depravity, Hollywood Queen Vamp, Theda Bara and her sultry staff welcome you to their bar where vampires and humans co-exist, for now.   This fantastic new show is a tongue-in-cheek blend of pop culture, Hollywood and Halloween.  A unique adult production built for those looking to fill their October with seasonal experiences appears for FOUR WEEKNIGHTS ONLY – OCTOBER 19 & 20 and OCTOBER 26 & 27.   It features an all-star cast from Rock of Ages Hollywood and veteran immersive theatre performers sharing scenes with each other and the audience in an innovative blending of rock opera and immersive haunt experience.

HOLLYWOOD & VAMP is one-part immersive theatre experience and one-part rock show, but together it’s an experience unlike anything else.

A sexy/campy send-up to Halloween, HOLLYWOOD & VAMP appears at Hollywood’s popular performance venue, The Bourbon Room, which also serves as home to the hugely popular Rock of Ages show.  From the team that created 2020’s acclaimed “Quaranscream Live,” a blend of live theatre and film, done virtually during the pandemic, 88Twenty Group proudly returns for 2021 with a nearly all female production to deliver a live in-person show.

Tickets for HOLLYWOOD & VAMP will sellout.  More information and tickets are now available online at http://hollywoodandvamp.com or at The Bourbon Room, priced at $75, which includes full access to the show and a specialty cocktail, to get the fun started.

About the HOLLYWOOD & VAMP Show:

You’re summoned into a Hollywood bar owned and operated by the Queen Vamp of Hollywood, Theda Bara. She insists her human staff all be sultry hot, and her vampire children all behave for their human guests… and for the most part they do.

Guests get the opportunity to mingle with vampires, some of whom seem friendly, some of whom are less so… but from the very beginning, this bar doesn’t seem as safe as you’ve been led to believe, whispers of a torture chamber in the kitchen and nightly ritual killings, is this just a feeding ground for vampires you’ve foolishly walked straight into? But the drinks are delicious and the atmosphere’s forbidden alure is too intoxicating to deny…

You’re invited into the theatre for a show, despite your better judgement, you journey beyond the curtain and find yourself locked in. The music starts and it’s like being front row at on the Strip in the 80s while Guns N Roses and Motley Crue shredded away in tiny clubs and you think to yourself… maybe this isn’t too bad.   But then one vampire attacks someone, then another, before you know it the entire room is in a frenzy of vampires fighting vampires and you’re just caught in the middle. When the sun rises you only hope you can walk out into the warm air and breathe it in, but that’s not guaranteed.

Ticket Price: $75 including a specialty cocktail

Tickets are non-refundable & non-transferable. Proof of Covid vaccination is required.