Los Angeles, Ca (The Hollywood Times) 6/9/18 – “We wanted to do something broad, where people could create their own worlds, their own rules, their own laws,” says Hollywood Fringe Festival director Ben Hill.  “The Fringe Festival checks all those boxes: open access, very few rules… it creates an orgasmic act of expression in Hollywood every year.”

The Fringe Festival concept began Edinburgh, Scotland in 1947, when eight performance groups appeared uninvited on the “fringes” of the exclusive Edinburgh International Festival. The Edinburgh Festival Fringe has since grown into the largest arts festival in the world, one of the biggest tourist draws in the U.K. and grossing over $100 million annually. Fringe Festivals have sprung up in dozens of cities worldwide, havens for underground and emerging arts scenes.

The Hollywood Fringe Festival was conceived in 2007 and began in earnest in 2010. This year’s HFF runs from June 7 to June 24 at venues throughout Hollywood: Franklin Avenue on the north, Normandie Avenue to the east, Rosewood on the south and Gardner Street on the west. Within that space will be 390 distinct shows, a 20% increase over 2017’s festival. 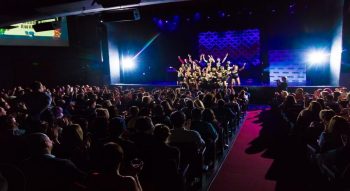 “We don’t choose the venues and put up the shows,” says Hill, noting that festival organizers act more as a liaison between artist and audience. “We have to attract the artists — Fringe Festivals are an international phenomenon, but not in Los Angeles.  We have to get patrons to come fill up the seats. And we have to listen to the community: We want the theaters to benefit as small businesses from this inflow of business.”

While the majority of venues are established Equity-waver theaters, there are also productions in bars, apartments, parks, churches and occasionally in traffic — like last year’s Shakespeare-in-a-van, Hamletmobile. Genres span ensemble theater, solo performance, musicals, cabaret, dance, and immersive theater. “As an artist, you can create any kind of venue you want… as long as you have insurance,” smiles Hill. 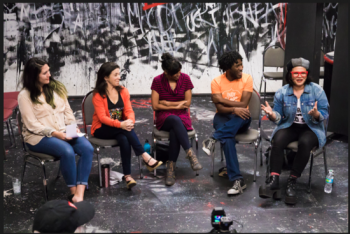 As challenging as it is for the Fringe Festival organizers to mount 2000 performances within the “fringe zone,” it can be equally daunting for a festival-goer to decide on what to see and when. There are no marquee names to attract fans; rather, it’s a opportunity for audiences to discover new talent. “I like to pick up a program guide or check the website on my phone and play the ‘what’s near, what’s next’ game,” says Hill.