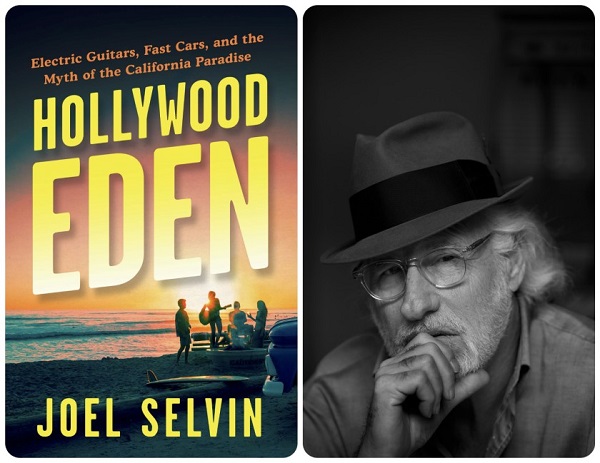 When you purchase an independently reviewed book through our site, we earn an affiliate commission.  By James Gavin

HOLLYWOOD EDEN – Electric Guitars, Fast Cars, and the Myth of the California Paradise

“Let’s go surfin’ now, everybody’s learnin’ how,” sang the Beach Boys on their breakthrough hit, “Surfin’ Safari,” in 1962, and countless youths began dreaming of the Southern California good life — a Shangri-La of mile-high waves and tanned surfer dudes lugging their boards across the sand. The Beach Boys and their inspiration, the duo Jan and Dean, had inaugurated a school of rock ’n’ roll that had little to do with greaser rebellion. Their music had a breeze blowing through it; it swung with an easy gait.

Joel Selvin, the former pop music critic of The San Francisco Chronicle, has explored rock’s history in a string of fun books, including “Monterey Pop” (written with Jim Marshall) and “Summer of Love.” In his new one, “Hollywood Eden: Electric Guitars, Fast Cars, and the Myth of the California Paradise,” he tells the story, set between 1957 and 1967, of a network of young Angelenos who “captured a California of the mind” — one of “cars, sun, sex and surf; ‘Gidget’ set to a rock ’n’ roll beat.”

Their lives were bathed in Hollywood unreality. The teenagers Jan (Berry) and Dean (Torrence) looked like blond, preppy Ken dolls. They loved snappy doo-wop and fast driving, but their partnership, formed in the late ’50s, had a snail-like crawl up the charts; only in 1963 did they make No. 1 with “Surf City,” about a mythical ocean paradise where there were “two girls for every boy.” Its composer, Brian Wilson of the Beach Boys, had repaid a debt by giving it to them: His group’s first single, “Surfin’,” was “practically a Jan and Dean knockoff,” Selvin writes. In a sequel, “Drag City,” Jan and Dean unveiled a new genre, the car song — “a symbol of freedom, possibility, self-sufficiency, the romance of the highway, all tied to life in Southern California.”

Jan and Dean unlock the door to other scrappy personalities in Selvin’s book. Kim Fowley, their schoolmate at University High in Santa Monica, was a ubiquitous music-business hustler who, though much disliked, had ears. In 1965, he met a group of “ragged hippies” who were sleeping on a friend’s floor in the Hollywood Hills. They became the Mamas and the Papas, and their hit “California Dreamin’” voiced one more siren call to the balmy West. It came out on Dunhill, a label founded by Jan and Dean’s early mentor, Lou Adler, who by now was living a Hollywood dream; he dated Ann-Margret, then married the teen idol Shelley Fabares. His former business partner, the trumpeter Herb Alpert, had given the California sound a Mexican twist. After attending a bullfight in Tijuana, Alpert had recorded “The Lonely Bull,” the hit that launched his new label, A&M, and made him a star.

Elsewhere in town, nepotism was reaping rewards. Another Uni High graduate, Nancy Sinatra, had been signed in 1961 to Reprise Records, owned by her father, Frank Sinatra. After four years of bland, inconsequential singles, Frank paired her with the producer Lee Hazlewood, who had masterminded a string of raunchy-sounding hits for the guitarist Duane Eddy. Toughened into the guise of a bleached-blond Malibu carhop, Nancy scored a No. 1 hit with Hazlewood’s “These Boots Are Made for Walkin’” — a song, Selvin writes, that “wasn’t meant to be sung as much as sneered.”

The author’s style is blunt, unpretentious and brisk; he knows how to move things along entertainingly. “Hollywood Eden” brings the lost humanity of the record business vividly back to life. The era he explores, however, was as fragile as the perfect wave. A 1966 car crash disabled Jan Berry. The personal lives of the Mamas and the Papas “were disasters,” Selvin notes, and the group was short-lived. The Beach Boy Dennis Wilson would eventually drown in a drunken dive into Marina del Rey. Songs about surfboards and convertibles had turned quaint, but in this book, their coolness is restored.

James Gavin’s most recent book is “Is That All There Is? The Strange Life of Peggy Lee.” He is working on a biography of George Michael.

Click to view the encounter, moderated by Roy Trakin between Joel and three of the women who play roles in the book’s narrative:

They are Jill Gibson: former girlfriend of Jan Berry and Michelle Phillips’ temporary replacement in the Mamas and Papas and accomplished photographer and artist.  She supplied many of the photos included in Hollywood Eden

Judith Lovejoy: former girlfriend of Dean Torrence, assistant to Terry Melcher at Columbia Records at the time of Bruce & Terry, The Byrds  (and daughter of actors Frank Lovejoy and Joan Banks)

Kathy Kohner: arguably the very first “surfer girl” whose exploits as a kid were chronicled in diaries that her father turned into Gidget on which the film and TV series were based.