Hollywood, CA (The Hollywood Times) 5/31/18 – In the last decade, Los Angeles has succeeded in establishing itself as the art capital of the United States. Its reputation as one of the world’s top art centers has created a recent influx of international artists, collectors, dealers, investors and museum directors. Today, the city has more museums per capita than any other in the US, including the highest concentration of local artists and a slew of wealthy residents willing to spend a pretty penny on art.

Seducing the next generation

Los Angeles has become an art giant, even surpassing New York, for several reasons. For one thing, LA’s vibrant art scene is attractive to the emerging generation of new artists who are seeking more affordable housing and rental spaces. Lower costs and spacious studio spaces aren’t just giving the old “starving artist” cliché the boot, they also make tuition to local leading art schools a real possibility. CalARTS (California Institute of the Arts), UCLA, the Roski School of Art, and Design at USC and MSA (The Mountain School of Arts) are some of the top art schools, offering the best in art education and consequently enticing young artists to establish themselves in LA after graduation.

The LA art community is a renowned and tightknit one. The publicity and marketing opportunities made available to new artists are commensurate to those in NYC, making key strategies like networking with social media influencers and industry leaders easily accessible. After all, LA is the top-dog when it comes America’s influencers and public figures.

Already established artists are also heeding LA’s seductive call by relocating from New York to experience the community for themselves. La La Land offers extra work space, a sunny environment with plenty of natural light, and a free-spirited no-stress ambiance—one artists feel greatly inspired by. This migration of successful and established artists is contributing to the expansion of an art scene that is already thriving. In the last 5 years alone, over 50 new galleries have opened in Los Angeles, and the city’s thriving art culture is showing no signs of slowing down. 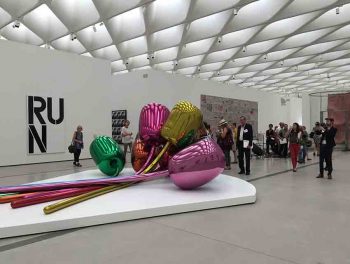 The exploding LA art scene with its booming population of artists has even inspired local billionaires to donate millions of dollars to encourage further growth. This year, $50 million was donated to LA’s Hammer Museum, and a whopping $150 million to LACMA’s expansion project. Thanks to these generous donations, the Hammer Museum doubled its gallery space and the LACMA is drawing up plans for a new satellite campus in South LA.

The city of West Hollywood (WeHo), which proudly operates under ‘The Creative City’ motto, has also made a strong contribution to LA’s growing art scene thanks to its relationship with the Arts & Cultural Affairs Commission which promotes and nurtures arts & culture programs. WeHo boasts many outstanding art galleries, many of which showcase the enterprising and provocateur talents of rising gay and lesbian artists.

WeHo’s Design District is home to over 300 art galleries, interior design showrooms, and artist cafes. Located at the Pacific Design Center is the Broad Museum, an expansion of the notorious LA Museum of Contemporary Art (MoCA). The Broad Museum was birthed in 2015 during LA’s art boom, following a jaw-dropping $140 million donation from billionaire philanthropist Eli Broad.

The NoHo Arts District is a community in North Hollywood that is home to contemporary theatres, diverse art galleries, public art, and artist cafes. Over the years, new arts studios have taken over Lankershim Boulevard, turning it into a culturally-rich urban neighborhood.

The Hollywood art scene is dynamic and diverse, mixing contemporary art like pop surrealism with unique themed exhibitions from international artists. Opening night parties for art galleries are at every turn, featuring hip galleries such as Loft at Liz’s and Stone Malone Gallery, and many other renowned LA galleries.

LA’s status as a global art center is bringing in some of the world’s best art fairs. ALAC at the Santa Monica airport hangar is a well-known fair that is attracting an increasing amount of mega galleries. Soon to be celebrating its 10th year in 2019, ALAC has been the core of LA art week, showcasing over 70 of the world’s best galleries. And in even bigger news, Frieze Los Angeles will soon join the international art fair calendar as an extension of Frieze New York, Frieze London and Frieze Masters. Hosted at the historic Paramount Pictures Studios, Frieze Los Angeles will debut its boutique-style fair in February of 2019, showcasing a long line of top international contenders. The addition of Frieze will attract even more artists and continue to cement LA’s status as a world art capital.

Taking it to the streets

A city that fosters creativity is one that encourages the emergence of new talent and inspiration. LA’s art walks do exactly that with their street art and murals that are all the rage in today’s culture. Since the ban on street art was lifted in 2013, many neighborhoods have been literally painted, making LA the mural capital of the world. As a result, entire neighborhoods have been transformed into trendy Instagram-worthy photo shoots.

LA Art Tours even offers an increasingly popular walking tour in downtown LA for those looking to explore these street murals, which are called “a treasure hunt for unique urban art”.

LA is responsible for setting some of the world’s most innovative art trends. In 2012, street artist Colette Miller illegally painted a pair of angel wings in the Arts District, creating one of Instagram’s best-known backdrops and earning her instant recognition. Instagrammers flocked to the scene for photos and retailers started commissioning Colette to put a pair of wings on their businesses’ walls to attract customers. Collette Miller’s Global Angel Wings Project became a viral trend and has since painted 200 sets of wings around the globe.

The Getty Center, the Broad Museum, the Hammer, the Los Angeles County Art Museum (LACMA) and the Museum of Contemporary Art (MoCA) have some of the best collections in the world. Located in Westwood Village near UCLA, the Hammer Museum houses paintings by masters such as Pissaro, Rembrandt, Cezanne, Monet and van Gogh. The Hammer is renowned for its impressive contemporary art collection and frequently puts on special exhibits and events. Admission to all exhibitions and public programs is free, which encourages the general public’s growing interest.

The burgeoning Arts District is also home to some interesting and eclectic art scenes such as 356 Mission which displays the talents of unique and thought-provoking artists, and the Night Gallery which only comes alive at 10 pm after the sun sets.

The increasing number of galleries and migrating artists will continue to be added to the already thriving art scene in Los Angeles. And with the international art world to follow, along with the sheer volume of galleries, museums, murals, art walks, openings, and talented artists, LA’s art scene is swiftly rising to heights that have no limit.

Jeremy Larner began his career as Rob Dyrdek’s manager and business partner. During that time, he was introduced to the world of art and never looked back. Today, Jeremy is the Founder and President of the New York-based art consultancy JKLWorldwide.com, where he conducts art procurement and investment strategies for a select clientele.

Stranger Things: The Experience Brings the Upside Down to Los Angeles in the City of Montebello OPEN NOW

Interview with Addi Somekh, one of the most innovative, prolific and well-traveled balloon artists in the world today