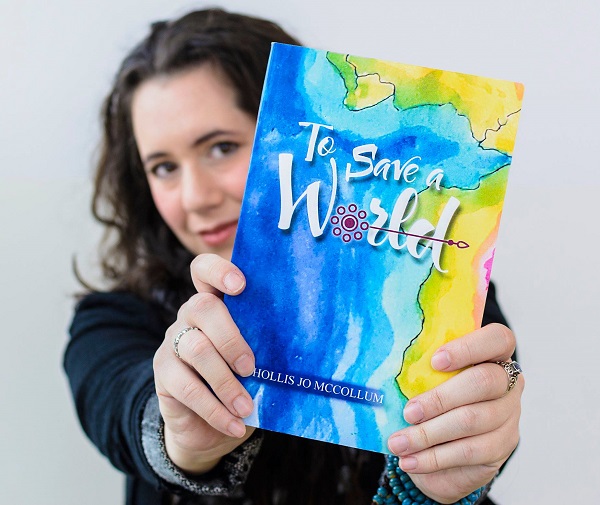 Los Angeles, California (The Hollywood Times) 12/30/2020 –  Stricken with a terrible case of wanderlust, traveling is Hollis McCollum’s happy place, and she will not stop until she’s seen everything. This may have something to do with her being a Navy brat and spending seven years as an Immigration Officer in the world of higher education, much of the world has already been seen, but it’s never enough!

Have you always been a Creative?

I consider myself to have always been one, yes. I’ve been drawing, dancing and making up stories since I was a toddler.

You have been stricken with a terrible case of wanderlust, traveling is your happy place. Share your vision of the world.

Goodness, that’s a big question! Honestly, I have been to over thirty-five countries (lost count around there somewhere), and have had the pleasure of experiencing a wide variety of cultures, places and ways of living all the way from being in a million-dollar penthouse in Tokyo to sitting in a grass hut in the Peruvian Amazon with native tribes. The one thing I have realized is all it takes is a little patience and understanding to effectively communicate with anyone, regardless of a shared language being present or not. My wish would be that everyone has the opportunity to travel abroad and experience something completely foreign to them, so they can learn how relying on others and asking questions is a wonderful practice and not a show of weakness. This sounds very altruistic, but if everyone could learn to put pride and ego aside when dealing with the unfamiliar, and take the time to understand it instead, the world would be a much more pleasant place.

What led you to write, “To Save a World.”

Being a hardcore nerd who plays Dungeons & Dragons led me to write it. Haha. I was so inspired by a game I played with my best friend, that I decided to write a novel for fun. Once I had friends and family read it, they strongly encouraged me to publish, and here I am. Being an immigration officer influenced my writing of the characters though. I didn’t realize it while I was writing the story, but readers have pointed out to me on several occasions how I approach racism, sexism and general bigotry through the personal journeys of the characters. Guess I ended up subconsciously projecting a bit. When I was an immigration officer, I worked on a university campus and was in charge of all of the international students who attended there. It was very fulfilling, frustrating and heartbreaking. I enjoyed it very much. Working with international students on a one on one basis really enlightened me. I had been an international living abroad myself, so I could certainly empathize in a lot of ways other people couldn’t, but there are certain challenges internationals face here in the US that are very unique. Seeing how American culture is perceived through their eyes, as well as how Americans treated them is a particular perspective. One that I think more people could do with understanding for their own personal edification.

What is the synthesis behind “To Save a World?”

Originally, I just wanted to write down a cool story I had in my head. However, through writing it and then through the feedback I received from readers, I realized I had actually written a story of self-discovery for each of the four main characters that ended up being relatable to a wide variety of readers. It is categorized as YA fantasy, but I have had readers from 13 to 75 years old (men and women) tell me that they were not only entertained but felt that they learned something from the characters as well. So yes, To Save a World is a fantasy novel with a grand adventure where a gang of heroes goes out and saves the world, but the internal journey of each character seems to be the main lasting impact on readers, which I love.

Share a passage from the book that will resonate with the readers.

Page 20, Chapter Three: “Defeat was not an option, nor was mediocrity. It no longer mattered whether or not Eithne had been chosen for the quest. There had been no chance of that from the beginning. She knew that now. Darian knew who she was at the start of the tryouts, and he had humiliated her in front of everyone for reasons she did not understand. It no longer mattered, however. After that awful morning, Eithne had realized that she did not need to leave under some justification, but could do it of her own accord. She did not need anyone’s permission or approval to start her own life.”

Where can we find it?

Amazon is the easiest answer. The Barnes & Noble website has it as well. It is available in paperback and ebook presently, and I am working with a narrator to get an audiobook version out as well. However, since “To Save a World” is on the Ingram list, literally any bookseller in the world can order it for you.

As an author, I have already written a second novel that I am presently shopping to agents and publishers. I’ve had excellent feedback on it so far from beta readers. I am also currently writing the sequel to “To Save a World” due to reader demand. I am in the early stages of it still, but am hoping to move faster with this book since I am no longer working full time at an office and can now devote more time to writing.