The Democratic Texas Governor is brought back into the fray and the limelight by Holland Taylor in the one-woman show, Ann, starring and written by the dynamic and versatile actress.

Pasadena, CA (The Hollywood Times) 04/08/2022 – If you have not seen Holland Taylor fully inhabit the role of a lifetime as Ann Richards, you should act like a Texan, put on your boots, and mosey on down to the Pasadena Playhouse before the end of the performances on April 24th. An unexpectedly successful American politician who served as the 45th Governor of Texas from 1991 to 1995, the success of Ann Richards was unexpected for a reason. After all, in the great state of Texas, she was not only a woman but a Democrat in a land of diehard, gun-toting Republicans. At the Pasadena Playhouse, Ann brings the late Governor back to life, and tickets are still available. 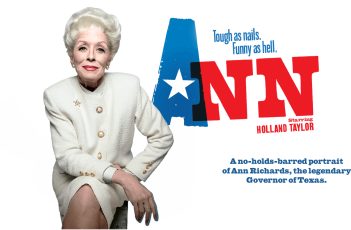 Ann Richards first came to light on the national stage as the Texas State Treasurer when she gave a funny and fiery keynote address at the 1988 Democratic National Convention that nominated Massachusetts Governor Michael Dukakis. Only the second female Governor of Texas, and the first not married to the previous Governor, Richards was revered by enlightened women nationwide for her outspoken feminism and zippy one-liners. Despite her popularity, Richards served only a single term, losing to George W. Bush, who later went on to bigger victories 😉 and some questionable decisions.

Directed by Benjamin Endsley-Klein, the one-woman show starts with Ann Richards giving a commencement speech to a graduating high school class in the heart of Texas. Using such a dramatic device allows Holland Taylor to spin stories and recount the highlights of an inspiring life. Later, we shift to a pot-boiler of a day in the Texas Governor’s office as Richards tries her best to juggle family squabbles, bumbling flunkies, and calls from President Bill Clinton.

Holland Taylor presents a multi-dimensional human being of character and humor, intelligence, and compassion every step of the way. Occasionally, overcome by frustration and the dirty nature of politics, Ann Richards seems on the verge of exhaustion and collapse. However, in a dynamic and detailed rendering, Holland Taylor shows us how the Governor always managed to rally the troops in her soul and continue the good fight for her beliefs. Although she inherited the tongue and the storytelling prowess of her affable father, she also inherited the grit and the resolve of her hardscrabble mother. While in her office, Ann Richards gets a panicked call from caretakers that her ninety-year-old mother is up on the roof cleaning storm drains. Such determination is a mirror that reveals what drove Ann Richards to such heights.

The only critique of the play is not in the performance but the construction of the narrative. Although Holland Taylor plays the role as if she was born to pay tribute to the late Governor, the crafting of the script lacks a specific narrative thrust. Although the setting goes through a vast change three different times during the story, the actual change lacks a narrative impulse. Rather than a drama crafted in a traditional act structure, the weakness of the text is that it feels more like a biography. A perfect example of a one-person show that avoids the pitfalls of biography is Tru by Jay Presson Allen, the 1989 recounting of the social downfall of Truman Capote. By avoiding biography, Allen shows the dramatic collapse of a once-great man.

However, despite this minor flaw, Ann starring Holland Taylor at the Pasadena Playhouse should not be missed. Ann Richards was an example of the American dream realized, and she deserves to have her achievements remembered. In this powerhouse of a one-woman show, Holland Taylor gives everything to pay such tribute to a woman deserving of nothing less.