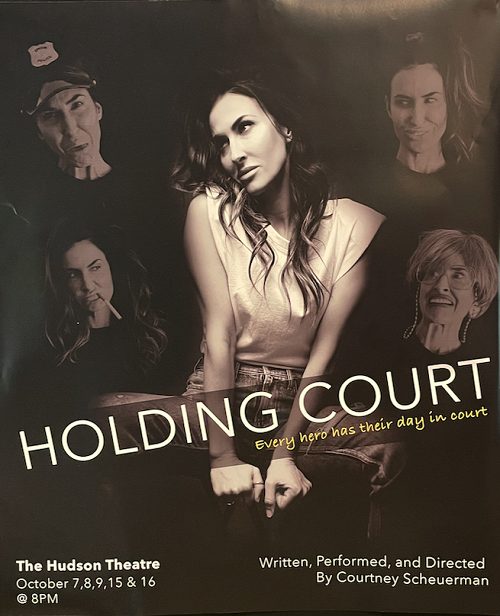 On Saturday evening at the Hudson Guild Theatre in Hollywood was the opening night of a limited engagement of a one-woman show Holding Court, a new show written, directed, and performed by Courtney Scheuerman. As Courtney explained after the show Saturday night, the play is a “hero’s journey,” defined in terms that make sense in our 21st century world. Courtney has considerable stage and television acting experience and uses her talent in creating an array of characters on stage in Holding Court. She is also a stand-up comedian and weaves into the play a number of vignettes that keep the audience rolling with laughter. So what is Holding Court all about? Framed as a therapy session with a new psychologist, the play stages her apprehensive meeting with an off-stage psychologist who lets her talk about herself and her life. The premise might sound a bit mundane but it soon turns into a lively recounting of events in the life of this fictional character named “Court.” 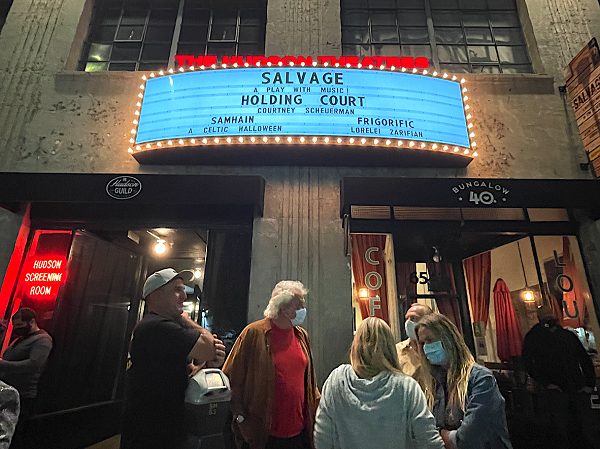 As she explains to the therapist at the beginning of the play, Court seems to have had every advantage in life while growing up: A loving, supportive family and a top-flight education at UC Berkeley. But she is troubled and seems afflicted by shame and guilt because of her failure to live up to her own expectations. A messy love life and her reliance on self-destructive coping strategies like petty lies only add to her emotional burdens. Court tells us that she has run through a gamut of therapists without doing the work that it takes to benefit from treatment. But this time and in this particular hour on stage, she encounters a practitioner who sees through her self-defense mechanisms and connects with her.

It this sounds too somber, the play is actually quite funny – as the actor Courtney takes on the roles and voices of different characters from her past, including an encounter with a exhibitionist with a sex-crimes arrest record who she chases the man two miles across town. Another memory is her childhood acting on stage in a musical production with a hard-drinking older actress with lots of bad experiences with men. The tone changes dramatically towards the end of the play, after the timer in the therapist’s office announces that the hour’s session is ended. When she is about to leave, Court opens up about a recent incident that has somehow dramatically changed her. In relating that incident, Court realizes that she has to become the hero of her own story. As the therapist (voice, off-stage) points out, Court needs to forgive herself for all the stumbles she has made on her life path.

It is the final ten minutes of the play that hit home the real meaning of Courtney Scheuerman’s Holding Court. She needs to literally be “held” by contact with another human being who she helps in a situation of deadly danger. Perhaps it is in just such moments in our lives that we find ourselves stronger than we ever believed and we prove ourselves capable of heroism. As Scheuereman sees it, “Every hero has their day in court.” And we are given the opportunity to sit in judgment as part of the audience.

Holding Court opened this weekend and plays again on October 15 and 16 at the Hudson Guild Theatre in Hollywood.

A special thanks to Courtney Scheuerman for sharing with me after the play, as well as the fine people at the Hudson Theatres and publicist Philip Sokoloff for arranging for me to see the production.