Los Angeles, CA (The Hollywood Times) 1/1/22 – With a week left to see this impressive exhibition at the Getty Center in Los Angeles, consider a trip to the Getty to experience the extraordinarily beautiful art of German master Hans Holbein the Younger, known today for his compelling, miraculously precise portraits of the wealthy and ambitious denizens of Switzerland and Renaissance England. Holbein’s portrait drawings and paintings were not only admired in his own time, they were also coveted and passionately collected over the centuries. The exhibition Holbein: Capturing Character in the Renaissance – running October 19–January 9 assembles the artist’s most sophisticated portraits, along with his skillful designs for jewels and metalwork, to illuminate Holbein’s singular contributions to constructing identity through portraiture and allegorical compositions.

This is the first major international loan exhibition of Holbein’s paintings in the United States, Holbein highlights the master’s artistic versatility and invites viewers to discover the many intriguing relationships between portraiture and other communicative art forms in the Renaissance, including jewels, portrait medals, and decorated book bindings. From early commissions in Basel for one of his foremost patrons, the scholar and theologian Desiderius Erasmus (1466–1536), through two highly productive periods in London, the exhibition encompasses Holbein’s career and celebrates his exceptional ingenuity.

Holbein painted one of his most arresting portraits for Simon George of Cornwall, about whom little is known. An abundance of meaningful attributes characterize Simon, although a single interpretation remains elusive. He offers a red carnation, traditionally associated with marriage. Enamel pansies, possible allusions to death, and a badge of the mythical lovers Zeus (in the form of a swan) and Leda, adorn his beret. Holbein attained an extraordinary sense of presence through the rendering of the decorated black silk on his shoulder, layers of color at the neck, and especially modeling of the flesh of the jaw and ear.

Holbein’s formidable skills enabled him to devise specific pictorial solutions for a variety of sitters – from Basel humanists to members of the English court, including prominent women. During his first trip to England (1526–28), he portrayed Anne Lovell (née Ashby) with the solemnity appropriate to the prominent status she and her husband Francis held locally and in court circles. Holbein animated her still form with sinuous linear elements, such as the edge of her folded silk shawl. Painting with a restricted palette of contrasts, he drew attention to the physical characteristics of the various materials that comprise her attire. His astonishing rendering of the plush white ermine fur softens the architectural form of her cap, while the weight of her pet squirrel, momentarily at rest, depresses the plush black velvet of her sleeve.

Despite Holbein’s remarkable precision, the identity of the sitter remained a mystery until 2004, when the significance of the squirrel and the star-ling were recognized and connected with the Lovell family. Both animals were important late additions by Holbein, probably made at the request of his patrons. Holbein painted the red squirrel, held gently by a silver chain and nibbling a hazelnut, over the sitter’s bodice. Squirrels are the primary motif on the Lovell family coat of arms, while “starling” puns on the name of the village near the Lovell’s Norfolk estate, East Harling.

The depiction of the knight William Parr is an especially elaborate rendering. On a sheet of pink primed paper used for portrait drawings after 1532, Holbein conveys Parr’s features in delicate chalks. Expressive strokes in black ink describe his fur collar and the elaborate links of his chain. Parr’s hat badge, a scene of St. George and the dragon detailed in a separate drawing in the upper left corner of the sheet, signifies Parr’s status as a member of the order of the garter. In minute abbreviations on the chest and sleeve, Holbein noted the white and purple velvet and white satin of Parr’s garment.

Desiderius Erasmus (1466–1536), also known as Erasmus of Rotterdam, was Europe’s first celebrity scholar, famous throughout Europe for his writings on theological and philosophical topics. His ideas were widely and rapidly disseminated through the recently invented printing press. His books, such as the satirical Praise of Folly (Encomium moriae, 1511), were best sellers, read avidly by men and women across the social spectrum. Although Erasmus believed that the written word was superior to the visual image, he used his portraits strategically to extend his influence and to satisfy the demand among admirers for his likeness. Holbein’s portraits helped ensure that Erasmus’s features – long nose, deep-set eyes, strong jaw– and scholarly persona were recognized throughout Europe. 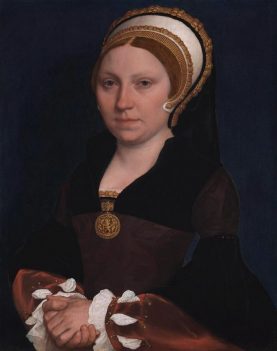 With some of his sitters, Holbein engaged in the ancient yet still-popular debate among cultured individuals about the superiority of the written word or a painted representation to convey an individual’s character. Whether Derich Born, a young merchant from Cologne living in London, was a humanist or simply aspired to sophisticated erudition, matters little. Holbein portrayed him with youthful bravura, against a fig-vine backdrop, resting his arm on a stone parapet in a manner reminiscent of the Venetian painter Titian, but also of Flemish painters from a century earlier. Born’s black satin sleeve, an astonishing display of painterly skill, underscores his penetrating stare.

In the 1530s Holbein portrayed several members of the Hanseatic League, German merchants residing in an enclave known as the London Steelyard (Stalhof). Four of the seven surviving likenesses are presented here. Holbein may have painted his sitters directly from life—his studio was located near the Steelyard and there are no known preparatory drawings. Strikingly, most of the young merchants chose not to be portrayed with references to trade and commerce. Instead, Holbein emphasized their familial associations – through objects like signet rings with emblems – or conveyed the sitter’s appreciation of ancient Roman culture.