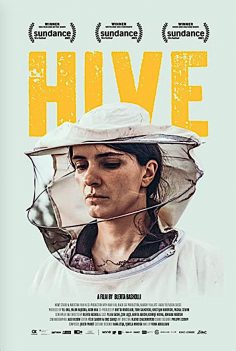 To support what’s left of her family, Fahrije comes up with a plan to produce ajvar, a condiment made from roasted bell peppers, and sell it at the village supermarket. Drama ensues as she struggles to overcome resistance from the intensely patriarchal villagers, including her crippled father-in-law, Haxhi (Çun Lajçi) and even her own daughter, Zana (Kaona Sylejmani). Fahrije Hoti, the protagonist of Kosovo filmmaker Blerta Basholli’s debut film, is a real person. After her husband went missing during the Kosovo War in 1999, she learnt to drive and founded a business selling local delicacies – much to the displeasure of the deeply conservative, patriarchal community. Director Basholli discovered the story of Fabrije and the village ladies via a local news report.

Hive is mercifully devoid of smarmy moralizing. For Fahrije, survival is the order of the day, and her absent husband’s beehives simply don’t produce enough honey. Realism takes many forms, and what we have here is something that one might call struggle core, a celebration of scrappiness and determination in the face of archaic patriarchal intransigence. This is symbolized by the image that opens the film, of Fahrije in a protective suit surrounded by an angry swarm of bees, some of which have managed to crawl in through tears in the fabric. To endure the stinging gossip of her fellow villagers, she will need psychic armor too.

As Fahrije waits for confirmation of her husband’s fate, there’s a growing sense that, deep down, she doesn’t want an answer. The Krusha massacres near Orahovac, Kosovo, were two massacres that took place during the Kosovo War on the afternoon of 25 March 1999, the day after the NATO bombing of Yugoslavia (now just Serbia) began. At that time, witnesses reported that a special police unit entered the village and separated the men and boys, and killed around 100 men and male teenagers over the age of 13. The women and children took refuge in a forested area outside Velika Kruša/Krushe e Madhe, where they were able to observe the police systematically looting and then burning the villagers’ houses. Fahrije lost her home that way and she has no idea if her husband was one of the many men killed or possibly he escaped in the woods near the Albanian border.

Fahrije knows she won’t be able to endure the hardship much longer. The beehives that her husband had set up are inadequate in providing for her modest household. Not to mention the frequent painful bites she has to suffer on the job, the sting of which Basholli’s camera intensely captures. So, she spearheads a different kind of hive in its stead, starting off a business of homemade hot pepper preserve that involves other hard working women in her situation and a savvy deal made with a local market that agrees to buy their product.

Worded like this, her venture sounds a lot easier and uneventful to kickstart than what we actually witness in the film, happenings that involve a network of unforgivingly patriarchal players shaming Fahrije for daring to get ahead in life and a group of intimidated women initially refusing her financial proposal just to avoid gossip. The women’s hesitation frankly seems understandable when Basholli gives us a damning taste of the impediments the deeply misogynistic town collectively throws Fahrije’s way, calling her a whore for everything, from obtaining a driver’s license to facing male buyers on her own.

The hostility escalates to such an unbearable extent that during one drive, someone vandalizes her car. During another, she gets subjected to sexual assault by the very man she’s supposed to do business with. On an especially soul-crushing day, she and her fellow workers find their jars smashed, their paste spilled all over. Basholli follows and photographs these events with an unfussy style, keeping her focus on the town’s suffocating earthiness and Gashi’s gradually hardening exterior that stubbornly fends off the vulgarity that surrounds her. At times, the filmmaker also finds traces of Fahrije’s unconsummated grief through her empathetic lens, discharging the pent-up sorrow at an especially heartbreaking scene where the young woman is asked to identify a lifeless body that could belong to her missing husband.

The indefinite suspension of the villagers’ expectations for her, as a woman either married or unmarried, allows Fahrije to act for the first time as neither and both, to imagine survival on her own terms. In its most uplifting moments, “Hive” celebrates the enabling properties of indestructible female camaraderie, something that Fahrije experiences once a crowded pack of the women in her circle overcome their fear and join her, especially after an older one of the bunch – the no-nonsense Naze, terrifically played by a deadpan Kumrije Hoxha – steps up and leads the way. There is release and relief in seeing their success, witnessing her father-in-law Haxi’s change of heart, and watching the clan of triumphant women celebrate their achievements in an exuberant, traditional circle dance.

As a work of fiction, then, Hive asks its audience to dwell in this tangle of grief and liberation alongside her. Understandably fixated on empowerment, Basholli glosses over stickier issues which might complicate Fahrije’s heroism. The film ends before we learn how she treats her employees, what she pays them once her business is established, and what becomes of the women’s organization as it turns into a labor force for the production of ajvar. Hive is careful to acknowledge, however, that whilst thousands of civilians remain missing no closure and no “happy ending” is possible.