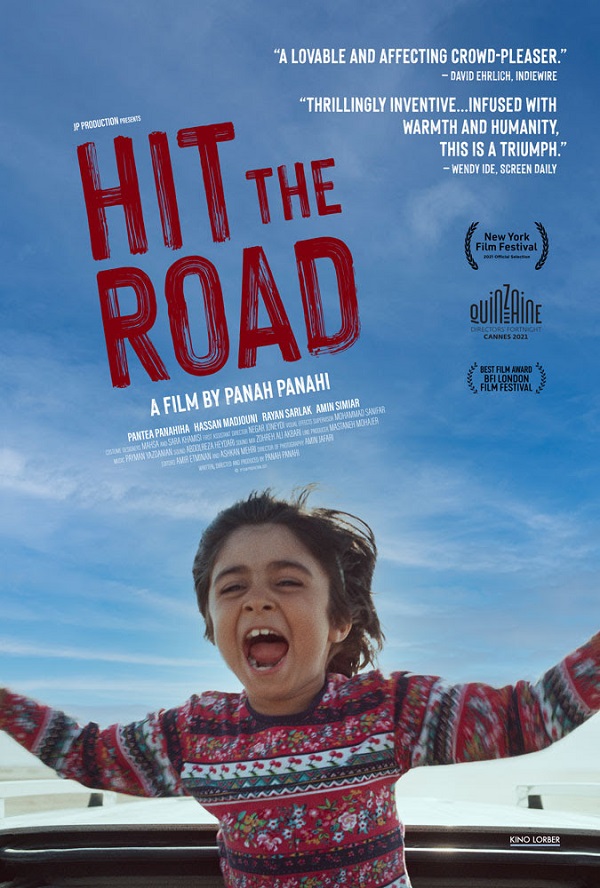 Los Angeles, CA (The Hollywood Times) 4/27/22 – Screening Friday at the UCLA Hammer/ Billy Wilder Theatre is a moving film from Iran – Hit the Road, directed by Panah Panahi, a debut film from the son of acclaimed Iranian director Jafar Panahi, who has been banned from making films in Iran and placed under house arrest. Hit the Road is a film about someone fleeing their homeland in a road movie that is also a political tale and a metaphysical journey.

Hit The Road is about a young man (Amin Simiar) on a road trip with his mother (Pantea Panahiha), father (Hassan Madjooni), and younger brother (Rayan Sarlak). He’s leaving his Iranian hometown for a somewhat mysterious purpose, but it’s not hard to gather what happened, especially when you hear the work by exiled singers on the radio and know that Panahi’s spent the last ten years watching his father struggle to live and express himself under house arrest. This is a film so simple and yet full of humor and immense pain.

The car has inside four persons: A mother (Pantea Panahiha), father (Hassan Madjooni) and their two sons. As the opening piano music plays, the camera moves downwards towards an energetic young boy (Rayan Sarlak) playing the keys of a piano drawn onto his father’s plaster cast. The 6-year-old and the dad sit in the back, the latter with his leg stretched out between the front seats. Mum is in the passenger seat and the much older brother (Amin Simiar) is the designated driver. At first, virtually all our attention is taken up with the child: he’s charming, incredibly funny and inventive, with high-octane energy levels that exhaust those around him. There is much back and forth about a mobile phone he has hidden in his underwear and the parents’ reaction to it, taking it apart and hiding it. No explanation is given for this, but as the journey progresses the reasons for dismantling the boy’s cherished phone become clear.

As they head further up the mountains on the dusty backroads and we hear bits of Azeri spoken between the static on the radio, we begin to understand the true reason for the trip: The older son is leaving. His brother’s been told he’s going away to get married but the conversations make clear that this is pure fabrication. The mother and son struggle with their secrets and lies, each of them suffering, while the father seems more oblivious to the problems at hand. It’s fitting that he is in the back with the child, as they are often seen playing. After all, with his broken leg in a cast, he cannot drive or help much. At one point, his wife wonders if his leg is really broken, as he has had the cast on for four months.

As the family nears its destination, the more outwardly beautiful things, a family sing-along, the sight of a chair moving through a field like the ship cresting a hill in Lawrence of Arabia come to mock the pall of sadness that falls over the small party. Panahiha asks Simiar what his favorite movie is, and he balks at the idea of making small talk at a time like this but relents and says 2001: A Space Odyssey anyway, anyway, which precedes Madjooni being magically cast into space during a monologue about his imagining real life impeding on his young son’s comic book fantasies.

The film constantly shifts and plays with different layers: The adults talk about one thing, but communicate another, a chance encounter (due to a minor accident with a bicyclist) offers an opportunity to voice deeply felt emotions. At the end of the film, we join a group of other Iranians camping out on the mountain side in tents and we see the young boy with his father looking up at the stars and imagining travel into space. This scene of magical travel foreshadows the arrival of men on motorcycles who will take the older son (Armin Simiar) away to an undisclosed place across the border into Azerbaijan. One heart-wrenching scene, viewed from afar, is a stand-out moment: a tableau vivant that captures the wild beauty of the country and the heartache of separation.