Hollywood, CA (The Hollywood Times) 09/28/2018– Hillbilly, an award winning documentary opens exclusively today at Glendale’s Laemmle Cinema for a one week run. The film is by Sally Rubin and Ashley York. Ms. York resides in LA but is originally from Kemper, Kentucky who returns to her roots during Trump-mania to explore the divide between the stereotypes the media has put out about hillbillies and to discover that her family are all staunch Trump supporters but she voted for Hillary. She is on a journey as a liberal progressive to try to understand why she has been treated differently in the field of journalism or her area of the country depicted as people akin to the portrayal of the inbreds in Deliverance. She has always felt different or was told to lose the accent to be accepted more broadly as a journalist.

York’s least favorite shows on television while growing up in eastern Kentucky were Hee-Haw and The Beverly Hillbillies due to the depiction of the Appalachians and the people who reside there as “poor white trash.” More examples of televised shows that depict the hillbilly in a poor light are examined with clips from Saturday Night Live and The Office – references to Forrest Gump.

Her father and mother went from a trailer to a large house he built for his family and they considered themselves a product of the American Dream. When she returns to her grandmother’s house it is a beautiful home – a stark contrast to what past media (back to LBJ’s presidency) shows as normal housing. To be fair – it’s a complicated issue especially in light of how much help the government gave and started helping poor people all over the US – not just Kentucky. 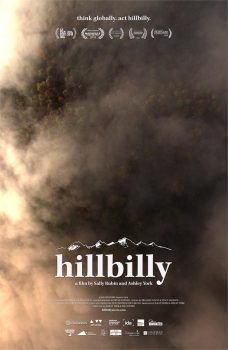 This is what he achieved: “The Office of Economic Opportunity was the agency responsible for administering most of the War on Poverty programs created during Johnson’s Administration, including: VISTA, Job Corps, Head Start, Legal Services and the Community Action Program.” – Wikipedia

We’re taken to Ohio, Kentucky, Virginia, Georgia and West Virginia to uncover an array yet unexpected (if one is close minded) set of artists, activists, poets, intersectional feminists, queer musicians and “Affrilachian” poets that showcase a region of rising voices that has been historically misunderstood.

The film calls for understanding and hopes to start a dialogue between Urban and Rural America. Politics and media are a focal point and the filmmakers hope to heal the divide of the Red and the Blue states of mind. Will we ever be free of all prejudice or bias?

When York’s uncle breaks down crying referring to his serving in the military, he says it was because he wanted to be a part of the brotherhood and he felt that due to his speech and accent – he was never given a chance. It’s moving but when he gives the argument that Trump did a little locker room stuff that most people sweep under the rug and “he’ll get jobs for us” Hillary is against them due to her being under investigation is a truly an educational moment. As eye-opening as the recent Senate Judiciary Committee hearings for Judge Brett Kavanaugh amid sexual misconduct allegations made by Christine Blasey Ford and two other women – have once again showcased the divide of our nation.

There is no question that the term “hillbilly” conjures up a plethora of negative images – many stem from comedy, not just politics and grew out of the South as well as the North or that America is indeed in a state of crisis of disproportional levels.

Blaming the people of Los Angeles or the “cityfolk” is somewhat like calling the kettle black but as a viewer understood as York’s experience and we all have them in life. Our own personal experience to explore.

Hillbilly stands out as a unique and personal tale that is compassionately told. Kudos to these filmmakers for an absorbing documentary that makes one see how history/herstory not only repeats itself but the importance of keeping a vigilant eye on keeping our stories alive in order to hopefully get better… at least for a while…

The better question asked is when are we all going to feel as if our uniqueness is enough to us as another is to them. Or we can fall back to Rodney King’s infamous broadcast appeal to the violent masses halfway through a six day riot in Los Angeles – when he said: “Can’t we all just get along?”

Theatre info and tickets for Hillbilly in Glendale, CA: www.laemmle.com