In Hershey Felder: A Paris Love Story at the Wallis Annenberg Center, the performer adds Claude Debussy to the “Great Composer Series” of one-man shows

Beverly Hills, CA (The Hollywood Times) 05/25/2019 – At the Wallis Annenberg Center for Performing Arts, Hershey Felder weaves his inimitable magic again in The Samantha F. Voxakis and Karen Racanelli Production of Hershey Felder: A Paris Love Story, featuring the music of Claude Debussy. In the critically-acclaimed “Great Composer Series” of one-man shows, Canadian virtuoso Hershey Felder assumes the characters and plays the music of many of the greatest composers in classical music history, including Ludwig Van Beethoven, George Gershwin, Irving Berlin, Frédéric Chopin, Franz Liszt, and Pyotr Ilyich Tchaikovsky. With Claude Debussy, however, Felder adds a new element as he opens the doors not only to the evolution of Debussy’s creative genius and a piercing excavation of the composer’s past traumas, but to his own story as well.

After his vibrant opening night performance of a show that has been extended until June 16th, Hershey Felder thanked the audience and opened the floor to questions. When asked by this reviewer whether he would describe this production as his most personally revealing theatrical journey, Felder quipped, “Since I have never mentioned my mother in any of my other shows, the obvious answer is yes.” Beyond the quip, Felder dove more deeply into the intimate details of his own life that had been revealed during the show. Indeed, hovering alongside Debussy on a recreation of the Pont des Arts on stage, a pedestrian bridge in Paris which crosses the River Seine, Felder’s presence is never far away.

As a starry-eyed nineteen-year old, Felder tells us he journeyed to Paris to walk the same streets and see the same sites as Debussy. A composer he and his mother treasured in his youth, Debussy’s music became a way to escape the traumas of childhood. Years after his mother’s death, he came to Paris to honor both her memory and the great composer that had brought them such solace through his mystical compositions. In his heart, the young man sought not only to express his gratitude to Debussy, but also to discover what had inspired the first Impressionist composer to create his dream-like masterworks that opened a door to the much later invention of jazz.

As Hershey Felder recounts in the opening moments of the play the significance of Claude Debussy in his life, he suddenly turns and walks back to the Pont des Arts. At the center of the bridge, a grand piano awaits him. Taking a seat at the piano, Felder uses what feels like sleight of hand to apply a mustache and goatee to his visage. Felder’s voice is gone as a heavy French accent brings forth the presence of the great composer. Before us stands Claude Debussy brought back from behind the veil.

Yet, Felder does not only invoke Claude Debussy to tell the story of his life. Indeed, Debussy also narrates the story of a Canadian youth’s first days in Paris as a young Hershey Felder struggles to find a path that will lead him to the creative heart and soul of his favorite composer. As the composer wishes to remind the young man, as Felder would love to have been able to tell his younger self, there is no straight line to Debussy’s genius because of the music’s dream-like qualities. Indeed, “That is what it means to live in a dream — you never really know where you are.”

As directed by Trevor Hay, the production reflects the history of precision and care that audiences have come to expect from Felder’s “Great Composer Series.” Meticulously researched, Felder as author does not try to hide the flaws of his subject. After surviving a childhood of compassionate neglect and belittlement, Debussy became an abysmal womanizer who struggled all his life with financial issues plagued by a grandiose entitlement. Bouncing from one social disaster to the next, the great composer left a trail of emotional wreckage behind him in Paris. 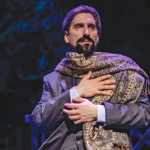 At the same time, however, Debussy revolutionized classical music. A rare visionary who proclaimed nature as his interactive spirituality, he composed music of transcendent splendor, color, and insight. From the sweeping freedom of La mer and the mythic wanderings of L’après-midi d’un faune to the numinous radiance of Clair de lune and the playful goofiness of Children’s Corner, Debussy consistently pulled magic out of the firmament of his tawdry life. As the sickly Debussy approached the end of his days, his greatest redemption was his love for his daughter Claude-Emma, a lively child affectionately known as Chouchou.

What is so remarkable about Hershey Felder’s matchless talent is how he weaves everything together, including the music and the biography of his subjects, to create an effervescent tapestry of a composer’s life. As he reveals the legacy of Claude Debussy in Hershey Felder: A Paris Love Story, something new happens as well. For the first time, Felder’s revelations are deeply personal as well. There is something exhilarating about those moments when the curtain is pulled back and Felder’s own life is bared. Given such an intimate opportunity, Hershey Felder: A Paris Love Story is a highlight of the summer season that should not be missed.