PALM SPRINGS — Today, the Human Rights Campaign (HRC) Women & Leadership program
announced an upcoming “HER” party in Palm Springs on Saturday, February 17 at a beautiful private estate in the Las Palmas neighborhood in Palm Springs. The event is sponsored by women-owned and managed businesses Lynn Hammond Catering, Women on a Roll, Olivia Travel and Smirnoff.  Media Sponsor: The Hollywood Times 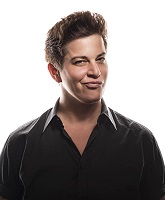 Entertainment will be provided by comedienne Julie Goldman — best known for her role as Betty in Curb your Enthusiasm, The People’s Couch, and The Big Gay Sketch Show. Sean Wiggins of Sean Wiggins
and 1One gOat who will also perform.

The event supports the work of the HRC. Ticket cost includes cocktails, appetizers, entertainment, and
annual or renewal membership to HRC. Tickets may be purchased online at
www.HRC.im/PalmSpringsHerHRC.

About HRC’s Women & Leadership Program
HRC believes that women, including transgender women, straight allies, women of color and women of all economic backgrounds, are key to our success as a civil rights organization and essential to the
LGBTQ movement’s ability to win equality for all. As a progressive organization, HRC can and must
reflect the diverse communities in which LGBTQ live and work.

Women have an important role to play in the fight for equality. Recognizing that women’s rights are
human rights, HRC’s Women & Leadership program prepares women to take on leadership roles as social change leaders and builds the leadership pipeline for greater representation and participation of women on HRC boards and volunteer steering committees. The HRC also places a priority on women’s issues, including health and safety, the workplace and families.

The Human Rights Campaign is America’s largest civil rights organization working to achieve equality
for lesbian, gay, bisexual, transgender and queer people. HRC envisions a world where LGBTQ people
are embraced as full members of society at home, at work and in every community.
###