Beverly Hills, CA (The Hollywood Times) 8/6/19 – Creator of HBO’s Eastbound & Down and Vice Principals, funny man Danny McBride returns with yet another comedy that some might call blessed and highly favored! The cast of The Righteous Gemstones had some time to discuss this new satirical show, as it delves into the morally ambiguous lifestyles of the rich and God-fearing.

Following the story of generational televangelists, The Righteous Gemstones set the tone for the many facets of dysfunctionality that a family in the trenches of the megachurch industry face. It seems however, that the plot behind this carefully crafted comedy resides mostly in the paradox of this family being prosperous and righteous, while simultaneously having characteristics that can at times seem grossly unethical. Mcbride explains, “The Gemstones have gotten exactly what they’ve always wanted in life, and we wanted to show, [like, how] corrosive and damaged you could still be, getting everything you want. And for us, it was interesting if these people were actually really good at what they do. So much so that they’ve created this massive empire.” 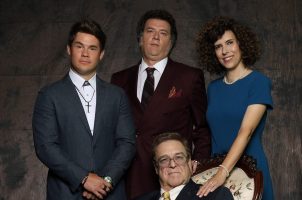 This very human and paradoxical approach to faith, life, and deceit allows the creators to, “[…] Leave a lot of the work up to the audience to sort of figure out where you align with these people, where you disagree with them, where you agree with them. I think to an extent, they all are believers. I do think that they all believe in what they’re saying, but I think they have a different relationship with faith.” according to Mcbride.

While this show seems to shed a comedic light on the less-than-moral station of Ministers’ families and some of the common trials and tribulations that befall them, Gemstones does not aim to take jabs at religion. The show aims to dissect and attack imposters with its profound levity and wit. McBride goes on to explain, “I do feel like when Hollywood decides to take on religion, I think they make the deadly mistake of like lampooning people for their beliefs, which is not something I’m really interested in doing. I don’t know enough about what I believe in order to go and pass judgment on other people. So, for us, it’s about, lampooning a hypocrite, lampooning somebody who presents themselves one way and does not act that way underneath. And I don’t think that’s something that is just relevant to the world of religion and televangelism. I think it’s something that’s relevant in just the world we live in, that you’re constantly being exposed to people who present themselves one way on social media but act another way in-person. I think hypocrisy is everywhere, and that’s ultimately, I think, what this story is about, about what happens when you don’t practice what you preach.” 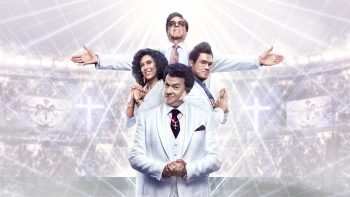 Please tune in to HBO August 18 7:00pmET/10PST to watch the gloriously hilarious series premiere of The Righteous Gemstones!