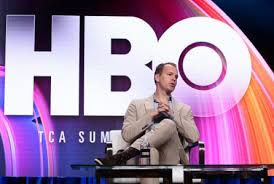 By Valerie Milano
Beverly Hills, CA (The Hollywood Times) 7/26/18 – HBO convened its executive session on Wednesday, July 25th, 2018 at the 2018 TCA Summer Press Tours taking place at the Beverly Hilton Hotel.  Present was Casey Bloys, HBO President of Programming, who immediately opened the floor for audience questions.
Bloys said that the DEADWOOD movie had been greenlit.  It will hopefully air in Spring 2019.
When asked about involvement from AT & T, Bloys said there were no plans to dilute the HBO brand in favor of volume programming.  “No one has come to us and asked us to not do what we do, which is to curate excellence,” he said as he tried to dispel anxiety about a possible acquisition or merger.

Hugely popular HBO programs like VEEP and GAME OF THRONES are coming to an end.  But as Bloys intimated, great new shows will always come along on HBO.

Though the HBO series WESTWORLD won many Emmys nominations, the creative backlash was pretty widespread among viewers and critics since the show contained quite a bit of gun violence.  Bloys said, “What I love about WESTWORLD is that the people who love it really love it.  Even the people who dislike it feel the need to discuss it and talk about it and let you know they dislike it and debate it.  And for a show to arouse that kind of feeling, that’s what we [at HBO] want.”
Other shows mentioned were THE NEVERS and THE DEUCE.  The second of these stars James Franco playing twin brothers.  THE DEUCE is coming back for its second season despite unresolved issues with Franco.
Some other shows coming up on HBO include MY BRILLIANT FRIEND, TRUE DETECTIVE (Season Three), BIG LITTLE LIES (Season Two) with Meryl Streep, and THE NEW POPE (Season Two) with Jude Law and John Malkovich.  CURB YOUR ENTHUSIASM will return with Larry David when he is ready.  HERE AND NOW will not return after only one season. 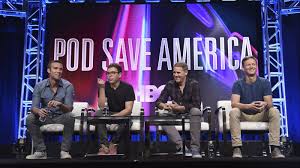 Netflix does many international shows, and so does HBO, which is present in over 60 countries.  HBO Asia, Latin America, and Europe are producing local shows and do not report to Casey Bloys in the US.
Bloys said that while Netflix and HBO were cable television rivals, there was no “raging war” between them.  HBO tries to put talent first and give the company a personal touch.
HBO just acquired THE TALE with Laura Dern.  “I liked that we were able to see it before we bought it,” said Casey Bloys.  “I think that you’re finding filmmakers more open to competing for Emmys as opposed to Academy Awards.”  It also looks like THE WATCHMEN will go forward soon.
Even if HBO needs to hire more executives, Bloys would not want the company’s culture to change in any way.  “I don’t want it to feel like a factory,” he said.

“Casey, when you find that the Department of Justice (DOJ) is meddling in your business, how does that set with you?” said the last questioner.  Bloys replied, “I will tell you that is so far beyond my pay grade and what I worry about — which is developing good shows.  What the DOJ is up to is not on my radar.  It’s not anything I’m really worried about.”  With that exchange, the HBO executive session ended.