Los Angeles, CA (The Hollywood Times) 2/26/22 – Friday night at the Motion Picture Academy Museum in Los Angeles was a screening of a restored print of The Hawks and the Sparrows (Uccellacci e uccellini, Italy, 1966), an absurdist comedy by master Italian filmmaker Pier Paolo Pasolini. The film is part of a major retrospective of the films of Pasolini, co-sponsored by the Academy Museum and Cinecittà in honor of the 100th Anniversary of the birth of the brilliant and controversial film director. Pier Paolo Pasolini’s The Hawks and the Sparrows is a whimsical fantasy about Christianity and Marxism; the question is left open as to whether Pasolini believes in either, or neither. Not that it matters much, Pasolini seems to say. Hawks still eat sparrows, no matter what a hawk is, or a sparrow.

A picaresque approach by a master of the Italian cinema resulted in this personal and different film by Pier Paolo Pasolini. This story is more like a fable, deliciously acted by Totò and Ninetto Davoli, in one of the best pairings in Pasolini’s movies. It’s not often that a film opens with the credits being sung, and even less common for the same singer to declare that the director put his reputation on the line in the making of the film. Normally this would seem like self-indulgence in the extreme, but watching Hawks and Sparrows, it’s not hard to see why. Italian director Pier Paolo Pasolini’s film breaks structural and thematic conventions like few others, and stands as one of the most remarkable political films of that most turbulent of decades, the 1960s.

The film is, in many aspects, a road movie. From the beginning, we watch as Totò and Ninetto take to the road in their trip to nowhere, it seems, but a trip which permits Pasolini examine some of the things that obsessed him, mainly his dislike for organized religion, as he perceived it in his country, as it clashed with reality. He takes the life of Saint Francis and the story about his relationship with the birds as the main topic for the movie.

The premise sounds simple. A father and son are walking through the empty roads of Italy, though to what destination we are never told. Through the people they meet and the stories they hear, Pasolini looks at everything from imperialism (The Las Vegas themed Café they visit) to religion, poverty, demography, the problems of the political Right and Left, and social divisions. The twist: Accompanying the men on their travels is a talking crow, who also happens to be a leftwing intellectual who loves to philosophize. 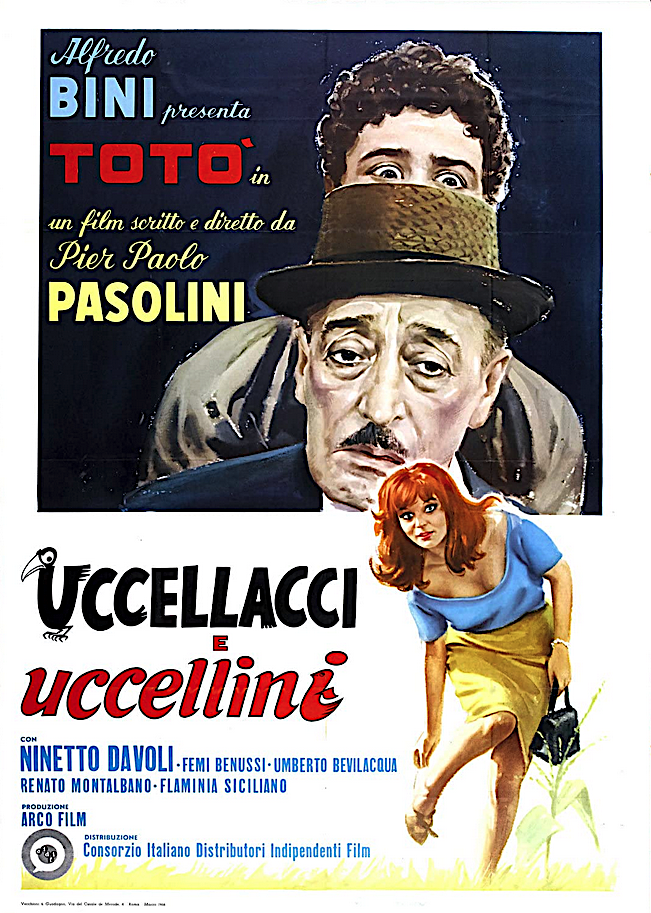 Despite the use of non-professional actors, save for the famous Totò as the father, in most parts then, it’s a road trip that takes a serious look at Italy’s socio-economic plight without being Neorealist (Fellini’s La Strada made the same fantastical break, but in a more light-hearted manner). Indeed, it avoids pigeonholing as a road movie too. One half-hour segment focuses on a pair of medieval Italian monks (played by the leads) ordered to spread the word of God to the hawks and sparrows, species Pasolini uses as a metaphor for class conflict, the haves and have-nots.

Underlining his point is the mixture of poverty and wealth that Pasolini’s 1960s “Boom” Italy represented. Any boom was in the North only, and among the already rich, men like the greedy engineer the pair owe money to. Cinematographers Mario Bernardo and Tonino Delli Colli vividly depict these divisions, from the hordes of silent unemployed, to the newly surfaced but empty highways and commercial airliners flying overhead.

Pasolini was a talented artist, with an unusual world view; a staunch anti-Vatican who made a film in conjunction with the Catholic Church, The Gospel According to St Matthew, and Hawks and Sparrows was made at a unique and charged point in Italy, shortly after the assassination of socialist leader Palmiro Togliatti in 1964 (whose funeral is fictionalized in the film). If he argues anything here, it seems to be that, in theory at least, Communism can be an extension of Christian moral codes. This has been bastardized, he hints at, by Maoism, rural-based Communism that the Chinese leader pioneered: “The Chinese, the Chinese!”, cries a starving woman in the film who boils bird nests for sustenance, at a time when the impact of his Great Leap Forward was beginning to emerge in the West. The funerals and cremations that punctuate the film convey Pasolini’s belief that only Chairman Mao has caused the death of a virtuous Communism.

The film is, in many aspects, a road movie. From the beginning, we watch as Totò and Ninetto take to the road in their trip to nowhere, it seems, but a trip which permits Pasolini examine some of the things that obsessed him, mainly his dislike for organized religion, as he perceived it in his country, as it clashed with reality. He takes the life of Saint Francis and the story about his relationship with the birds as the main topic for the movie.

Departing from the realistic style of his earlier films like Accattone, Mamma Roma, and The Gospel According to St. Matthew, Pasolini gives us a stylized fable. An old man (played by the famous Italian clown Totò) walks along the road of life with his son (Ninetto Davoli). They are joined by a philosopher crow that asks them embarrassing questions about life, philosophy, men and crows. The crow seems to be a Marxist, but that is only if the men are Christians. And the men don’t seem quite sure about that.

While the crow is talking, Totò and his son suddenly find themselves transported back 750 years to the time of St. Francis. The saint instructs them to learn the language of the birds and convert the hawks and the sparrows to God’s love. After a great deal of effort, they succeed with the hawks – but not before Toto has become such a famous holy man that peddlers set up stands and sell brooms and watermelons wherever he prays. One day, in a fit of rage, Totò drives the peddlers away.

Having cleansed the neighborhood of capitalism, he makes a breakthrough: Sparrows communicate not by chirping but by hopping. The two companions hop about delivering a sermon, the sparrows are converted, the adventure seems about to have a happy end. But then one of the converted hawks kills and eats one of the converted sparrows, for such is the nature of hawks and the plight of sparrows. Toto is plunged into despair; he taught the birds how to love their own kind, but he couldn’t convince them to love their neighbors.

And perhaps that is the weakness of Christianity and Marxism and almost all of man’s ideologies; too often they only persuade people of the same belief to agree with each other. But before Totò and his son can quite get it straight, they’re whisked back to the present time and treated to more speeches by the crow and more adventures along the road of life. They denounce the concept of private property and protect it. They see a baby born and they go to a funeral. They meet a beautiful woman named Luna (Ferni Benussi) on the road and each sneaks off in the bushes to make love with her. After a while they get hungry and eat the philosophizing crow. So much for ideology!

With The Hawks and the Sparrows, we get the absurd and the surreal, placed wonderfully in social constructs, and it reveals a filmmaker who can, unlike but like his controversial reputation presents, open up a whole other perspective with a strange twist that mixes classic Italian film style and scathing subject matter.