Los Angeles, CA (The Hollywood Times) 3/26/22 – Screening at the Los Feliz Theatre in Los Angeles last weekend of March 18 was Ryûsuke Hamaguchi’s recent film Wheel of Fortune and Fantasy (2021) which premiered in Berlin last year, winning the Silver Bear, but was somewhat overshadowed by the ambition and scope of the Cannes prize-winning Drive My Car, which debuted a few months later. But this female-led triptych of stories, with its deft, empathetic camerawork and intimate, intricately crafted character sketches, is a minor masterpiece in its own right. Unapologetically dialogue-heavy, each segment is given levity by a certain playfulness of approach. The first story, about a young woman who realizes that her best friend’s new boyfriend is her own ex, concludes with a teasing dual ending. The second – the darkest – deals with an attempted honeytrap seduction with a terrific extended scene powered by a sparky erotic charge. And the final segment takes a gentle sci-fi premise – a devastating computer virus – but relegates it to the background in favor of a story of mistaken identities between two women. Wheel of Fortune and Fantasy is distributed by Film Movement and can be viewed online through various platforms. 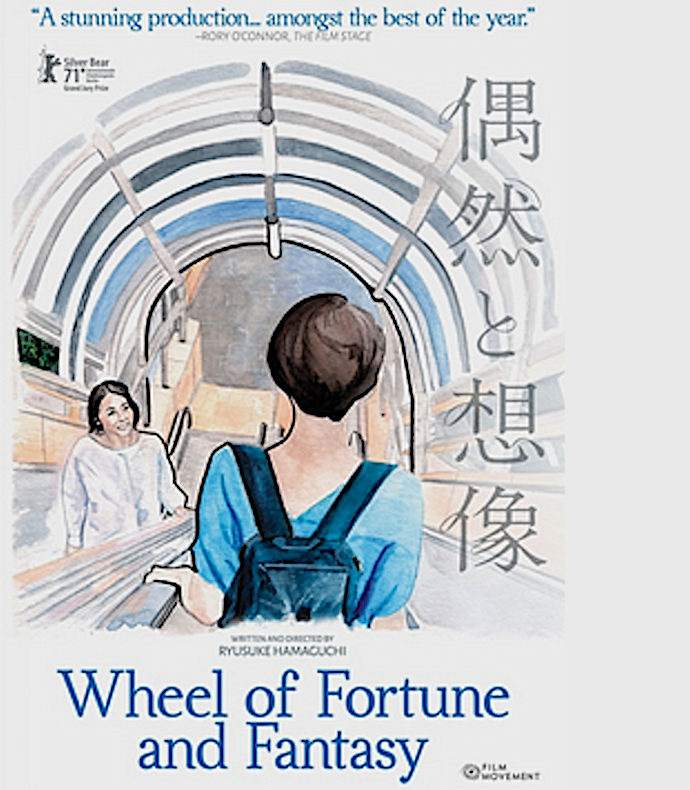 Ryûsuke Hamaguchi is a Japanese film-maker whose work first became noticed in 2018 with his doppelgänger romance Asako I & II and indirectly via last year’s experimental chamber-piece Domains, whose screenwriter Tomoyuki Takahashi has worked with Hamaguchi. Now he has unveiled this ingenious, playful, sparklingly acted and thoroughly entertaining portmanteau collection of three movie tales. Their themes and ideas are emerging as keynotes for this director: fate and coincidence, identity and role-play, and the mysteries of erotic pleasure and desire. There is a rather European flavor in the mix – one of its characters is a specialist in French literature. And although there is no formal connection between the stories (other than the thematic echoes) the simple act of juxtaposition creates something pleasingly cohesive.

In the first, Magic (Or Something Less Reassuring), we see a model called Meiko (Kotone Furukawa) going home in a cab after a photoshoot with her friend, an art director called Gumi (Hyunri Lee), and gossiping excitedly about the man that Gumi has started seeing. This marvelous-sounding individual really opened up about his own feelings on their date, talking about the ex who broke his heart. Something about this description makes Meiko very thoughtful, and she goes to see her own ex, a successful young businessman called Kaz (Ayumu Nakajima).

In the second story, Door Wide Open, a mature student called Nao (Katsuki Mori), married with a child, is having a passionate affair with a young undergraduate, Sasaki (Shouma Kai), who has just been humiliatingly flunked by his professor Segawa (Kiyohiko Shubukawa), an award-winning scholar and novelist. Angry and vengeful, Sasaki asks Nao to try seducing this man, so that he will be disgraced.

And in the third story, Once Again, Moka (Fusako Urabe) is a thirty-something woman who goes to a dismal high-school reunion and only afterwards at the train station runs into the person that she really wanted to see: the woman who was her first love. Nana (Aoba Kawai), though apparently flustered and bewildered, is delighted to see her. But it isn’t until halfway through their halting conversation that both women make an alarming discovery.

Hamaguchi shows how each situation is redeemed, or at any rate altered, by a kind of miracle. In the first, Meiko has the magic power to stop and rewind time so that she can play out a certain situation, or conversation, differently. In the second, the dignified thoughtfulness of Segawa means that Nao is deeply moved and this complicates her erotic designs on him. Throughout their conversation he asks for his office door to be kept open to prevent any suggestion of impropriety, but this is also emblematic of his own openness. And in the third, Moka and Nana use role-play to ease their painful emotional burdens.

This trio of stories is elegant and amusing, with a delicacy of touch and real imaginative warmth. The narratives saunter along lightly but fundamentally seriously, asking us to consider how the paths we take in life – the wrong turnings, the right turnings – can be governed by the merest chance. It’s a really pleasurable and invigorating experience. At the Q&A following the screening of Wheel of Fortune and Fantasy on March 18, Hamaguchi explained that he actually made the three tales in this film during the COVID Pandemic and in the middle of shooting Drive My Car.

Mysterious doublings tend to occur and recur in the work of the brilliant Japanese writer-director Ryûsuke Hamaguchi, one of the most exciting filmmaking talents to emerge in recent years. Wheel of Fortune and Fantasy is a poignant, sometimes piercing triptych of tales -– playful, beguiling and quietly affecting. The unforgettable closing image contains emotional multitudes, and it throws the meaning of all three stories into subtly clarifying relief: The past may be irretrievable, but the present is still a gift.