Los Angeles, CA (The Hollywood Times) 3/29/22 – Hamaguchi Ryûsuke’s Drive My Car (Japan, 2021) was just awarded an Oscar as the Best International Feature Film at the 94th Academy Awards on Sunday. Drive My Car is based on the short story of the same name by Haruki Murakami from his 2014 short story collection, Men Without Women. The film was selected to compete for the Palme d’Or at the 2021 Cannes Film Festival where it won three awards. The 3-hour film first introduces us to a beautiful cosmopolitan Japanese couple who share their work in film and theatre, but seem to have a very active sex life. We learn that they have been a married couple for a long time but seem invested in lots of lovemaking as well as listening to classical music – the combination from which they brainstorm ideas for television dramas. While having sex, the woman Oto (Kirishima Reika) voices parts of stories between load moans, only to forget them later. But the man Kafuku (Nishimima Hidetoshi) remembers every detail. 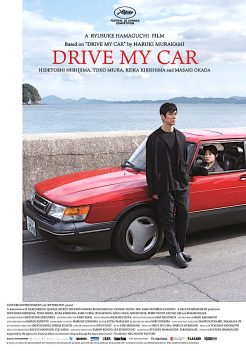 Eventually, we came to understand that Oto is a screenwriter (mostly for television) and that Kafuku is a stage actor and director. They are both successful and seemingly complementary to each other’s lives. She records the lines of Anton Chekhov’s play Uncle Vanya on tape for him to listen to on his long commutes so that he can memorize his lines to perfection, but also to fill his red cocoon of a car with her lush and ghostly presence. The fact that this is accomplished in pure analog form and that the car is incongruously old is perhaps our first clue to the complexity, or even philosophy, of the film. Why would such contemporary lovers surround themselves with such anachronistic devices? This will lead us to understand that their lives are built around the trauma of betrayal that keeps them stuck in time past.

Drive My Car repeats some of the same motifs that can be seen in Hamaguchi’s prior film Asako I & II, such as references to Chekhov and the strange duplicity of lovers. However, Oto, for one, is much closer to the voraciousness of Maggie Cheung in Olivier Assayas’s Irma Vep (1996), than to Asako’s submissive daintiness. The pleasures to be had in Drive My Car lie mostly in its first act when the layers of the film unfold with a voluptuous slowness and a sense that narrative endpoints are irrelevant. Oto and Kafuku live their posh lives with such ease and gusto, from loft to airport to hotel to corporate high-rise, that it’s as if they’re floating painlessly through urban Tokyo – just as we see Kafuku’s red car speeding down Tokyo’s freeways.

Everything in their relationship seems completely under control, as if by some invisible prior agreement. When Kafuku catches Oto cheating on him with a young man (Okada Masaki) in their living room, there is no shouting, no confrontation, no rupture. Not even resentment. He briefly watches the action through a mirror and delicately slithers out of the room. The couple has survived a personal catastrophe, the death of their only daughter 20 years before, plus minor medical issues, including Kafuku’s recently diagnosed glaucoma. This literal “blind spot” comes to serve a metaphorical purpose in the narrative when Kafuku returns home unexpectedly one day to find Oto having sex with one of her actor colleagues, handsome young hothead Koshi (Masaki Okada). Kafuku deliberates on whether to confront his wife about it. But before any resolution is possible, Oto dies suddenly, taking her secrets to the grave.

With Kafuku’s return to the apartment, he finds the dead body of Oto on the floor. At that point, the film shifts from a textural experience of how things happen to a more conventional account of what will happen next. Two years after Oto’s death, Kafuku sets out to direct Chekhov’s Uncle Vanya in an artist-in-residence project in Hiroshima. He stays in an idyllic location on an island far from the theater where the rehearsals are to take place so that he can practice with Oto’s taped voice during the commute. But he’s told that he is not allowed to drive his own car for safety reasons and is offered an experienced driver, Misaki (Miura Tôko), a mysterious young woman with a scar on her face. He’s reluctant to allow Misaki to drive but eventually gives in. The lethargic pace of the film is underscored when the subtle opening credits finally appear almost 40 minutes into the story.

The situation, of course, gives the film its title and paves the way for uncanny moments where Misaki witnesses Kafuku listening to his deceased wife’s voice act out the lines of the play. Yet instead of allowing these scenes to brew and revel in their metaphorical potential, Hamaguchi spends the rest of Drive My Car providing causal explanations for the misery of the characters and articulating the ways in which the irreversibility of death makes us all connected through regret and guilt. Hamaguchi’s acute attention to the storytelling power of surfaces and clothes (Kafuku’s turtlenecks, Takatsuki’s shimmering jackets) remains faultless. But as this long, slow movie progresses with endless rehearsals of Chekhov’s Uncle Vanya, we keep sliding into side stories related to his experience with members of the theatre company in Hiroshima.

First, there is the issue of Oto’s ex-lover Kôji Takasuki (Masaki Okada), having recently quit his career as a TV pin-up under a cloud of scandal. He and Kafuku form an awkward camaraderie, bonding over their shared love of the same woman without ever quite touching on the affair: “I believe Oto brought us together,” Kôji claims. Kafuku’s friendship with Kôji is essentially a performance, the older man using skilled fakery to try and uncover deeper truths about his late wife. But his slow-burn connection to Misaki proves more emotionally revealing: Two damaged, deep-frozen souls who eventually help each other achieve some kind of closure during a snowy pilgrimage to the far north of Japan.

What is more revealing is Kafuku’s gradual notice of his driver Misaki Watan (Tôko Miura), who remains an enigma until the last part of the film, where Kafufu tells him that the only thing she knows how to do well is to drive. She had originally used her driving skills to work for a trash disposal site in Hiroshima as a garbage truck driver. After an incident removes Kôji from the cast for the stage production of Uncle Vanya, Kafufu decides to have Misaki drive them in his red car to visit the distant village where Misaski grew up and where, due to a landslide, her childhood home was destroyed, leaving her mother dead and Misaki the sole survivor. A long road journey ensues with Misaki at the wheel. Together they walked up the mountainside to see the remains of the collapsed house in the snow. He shares his own sense of loss – the death of his wife Oto and the loss of their daughter 20 years before. Suddenly realizing that Misaki is about the same age as his dead daughter would be, he feels connected to her.

We return to Hiroshima for production on the stage of Chekhov’s Uncle Vanya and know that Kafuku has taken over the role of Ivan Petrovich Voynikshy (“Uncle Vanya”) – a role that he felt he could not perform himself. The closing act also delivers a series of grace notes, including a sublime final twist on Uncle Vanya and a cryptic COVID-era coda which teasingly suggests an ongoing connection between Kafuku and Masaki.