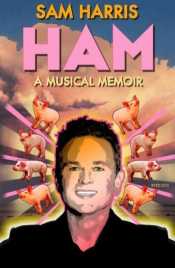 Los Angeles, CA (The Hollywood Times) 7/24/19 – A fun musical biography experience. hmmm Tuesday night, tried, do I really want to do the traffic to Hollywood?

Hmm, 11 different roles- that could be fum, Sam Harris winner of Star Search, he has done Broadway and he does sing well. Why am I resisting?
Ham:A Musical Memoir is directed by Andrew Putschoegl who was the winner of the Theatrical Distribution Offer Award at the Slamdance Film Festival a few years back.  If this is an example of his work cheers.  It is a bit sloggy but good fun. 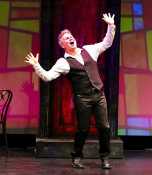 Adapted from Harris’ New York Times best-selling book, HAM: Slices of a Life , this musical comedy takes us from a conflicted childhood in Bible-Belt Oklahoma to the dizzying roller coaster ride of a life in show business and the precarious balancing act of fatherhood.
Sam Harris is certainly a Ham. He sings wonderfully and completely immerses himself into characters you have be willing to go along but why not we have enough drama to deal with , lets give vaudeville a chance.  TOTALLY enjoyed a hilarious bit of sketch comedy in which he plays five different characters–himself, his producer, his publicist, his agent, and a not so enthusiastic intern.

Advertisement
If you’re already a Fan, great  or  not…..  become one, even if it is just for the evening.
It’s a heartfelt journey, he really enjoys himself a revelation and  all that is Sam Harris!!
“it comes from a kid growing up gay in the Bible Belt, who found music, theater, and writing as his savior–humor as a savior. They say “comedy is tragedy with time,” and so it’s about a perspective about this for everyone–everyone has felt outside, felt disconnected, everyone has had ups and downs in their lives. So there is a theme of that, and finding normal, and a theme of finding what is enough. Emotionally what is enough. [For me] I have found that in my family. It’s about that process, and it’s also cultural in that what we’ve seen happen in this time that we are living–from what was going on in the ‘60’s, culturally. I’m married and have a kid! That wasn’t even remotely fathomable when I was growing up, it wasn’t even something you could consider as a remote possibly. So everything has changed in this lifetime, and it’s about that aspect of things as well.”

Our man, Ham, brings back some of the joy and makes us remember it is not all bitterness.  History has changed us.  There is hope here in a time when we need it.