Anaheim, CA (The Hollywood Times) 1/30/20 – What happens if you are a talented musician, work hard, stay the course, grow up, and keep moving forward?  I don’t know, and it’s irrelevant to this story, since the “grown up” part doesn’t quite apply to Wisconsin’s Greg Koch. He’s matured in life for sure, but his approach is no less irreverent, with a goofy joy that comes from loving an audience and wowing them with the sheer audacity of his skills.

This 53-year-old musician with gentle Midwestern grace (coupled with a majestically bent sense of humor) has a signature guitar, signature pickups, signature amp, and the kind of internet presence usually reserved for young Youtube stars or dogs wearing cat costumes (oh, the humanity). Part of a grand master marketing plan? Some sort of pact with dark and sinister forces? Perhaps the workings of a tribunal at the head of the international military-industrial complex fixated on public mind control via chicken-picked guitars?!?! No, Koch has done this in a more old-fashioned way: with blind faith and truly focused work. Plus there’s the small fact that he’s currently one of the best electric guitarists on the planet.

“I didn’t start with a master plan of any sort. I studied music at the University of Wisconsin at Stevens Point to get my technical knowledge up, but it was not to become the next big jazz guy with an ES-175 and thick strings. I knew I wanted to rock.” The music biz is littered with stories of folks who got the big break, who got the record deal, only to find dejection and heartbreak at the end of that road.  These factors have so often ended promising musical careers. In this sense, Koch received his share of rejection. Back in the halcyon days of record companies, before the old paradigm collapsed, there was one directive at the record companies: “how do we market this artist? what genre are they? how do we present them?” When you have Koch’s ability to meld the blues of folks like Jimi Hendrix and Albert Collins with the chicken picking of Albert Lee and Danny Gatton, and throw in a fair amount of jazz masters like Wes Montgomery, it is pretty much a given that most labels would not know what to do with the guy.

But he kept playing. He also started raising a family with his wife Sarah. He now has four kids: Dylan, Grace, Ila, and John. The gunslinger knew he wanted to play AND wanted to do right by his family, so gradually he dialed down the late-night post-show hang and concentrated on more nearby regional work. He navigated his wife’s full-time graphic design schedule to support the family and get the kids to school and after school activities.  During all this time, the man kept playing and growing as a musician.

Advertisement
The Roman philosopher Seneca famously posited: “luck is when preparation meets opportunity” (then again, Seneca was a drummer, so what did he know? I kid). Some folks from Fender happened to catch a Koch show in the late 90’s and were floored by what they heard. Koch soon became part of their promotional onslaught, appearing on their behalf at NAMM shows and stores around the world.  The ensuing story of his current popularity is one of perseverance and serendipity. As fate would have it, Wildwood Guitars, a premier guitar boutique retailer, was familiar with Greg’s work for Fender and asked him in 2010 to fly to their home base in Louisville Colorado to do a guitar promo video and see how it might go.  Says Greg, “I came out and prepped to do the first video shoot, which I did.  Steve Mesple, the man who originally invited me, watched me do exactly one video and then came over and said, ‘can I pay you to come out here once a month and shoot videos for all our guitars’?”  A little thing that the kids love, the internet, had been roiling around for a few years, but at this exact time was really starting to present the bandwidth on youtube and vimeo and such to host longer form, better quality videos. Greg’s video work for Wildwood, which coupled his guitar skill with an offbeat presentation, caught fire and has been a smash.  Steve’s instincts were proved correct. – as Koch says, “there’s no middleman on the internet”.   From Koch’s first videos in February 2011 to date, Greg believes he has done over 4000 videos for Wildwood (that is 4k, not a misprint), totaling over 50 million views, playing every conceivable brand of high end axe offering out there, and effortlessly making them all sound great. 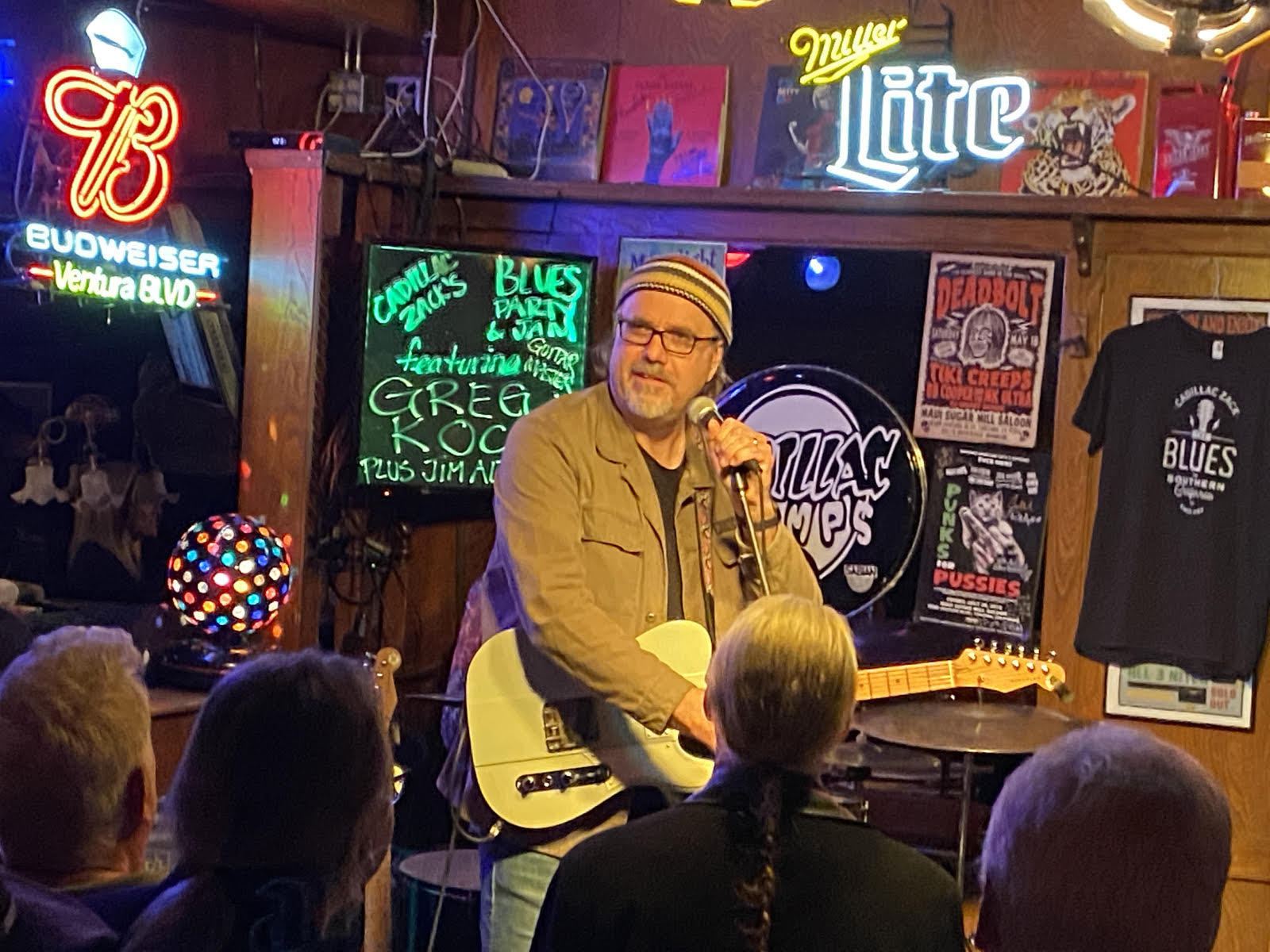 Greg Koch – Good Evening! – Maui Sugar Saloon, Tarzana CA 01/27/20Koch has many fellow travelers on his musical journey, and has jammed as a peer with the likes of Eric Johnson, Joe Bonamassa, Steve Vai and so many others.  But he has long known that he needed to have his own band to directly work in service of his muse, free from any record company or corporate agenda.  After years of building the contacts and doing the road work, the dream has come to pass as the Koch Marshall Band begins to criss-cross the USA (using all his own signature equipment, no less).  With a new agent and two stellar musicians in tow, Koch finally has an ideal vehicle for his playing with the correct machinery under it to spread his six-string gospel. His two cohorts are matching him in terms of heart and technique. Toby Lee Marshall is simply a murderous B3 player from Minneapolis who also kicks bass in the trio, and is a great singer to boot. He is a perfect foil for the guitarist’s most adventurous excursions. And rounding out the trio is Greg’s 25-year-old son, Dylan.  “I remember him just picking up sticks and beating on pots and pans as a 4-year-old. My wife is a supporter of theater and the arts in general, so we both supported the ‘fever’ in Dylan and all our kids.” Dylan first started turning heads in his teens playing with regional bands, then playing with his dad at the age of 17. The kid has a bright future ahead of him.  In the meantime, playing around the country with dad keeps the two congenital absurdists close.  Recently the trio completed a brief west coast tour which included a visit to the NAMM show and shows for LA promoter Cadillac Zack, culminating in a sweaty and crazed Monday night show at Maui Sugar Saloon in Tarzana. Clearly, a buzz has started. The room was filled with admirers, and the trio more than paid back their attentions with Koch signature tunes like “Unrepentant” as well as choice covers like an astounding instrumental take on Led Zeppelin’s “Since I’ve Been Loving You”. And the buzz only grew when two guests came up to push the fire higher.  Up-and-coming new blues master Josh Smith came up and jammed with a jazz-informed country bent that Greg matched pound for pound.  After that, the Toledo native and sought-after Alan Parsons Project guitarist Jeff Kollman ripped through a longtime favorite tune of Koch’s, the oddly-named (of course) piece “Welch’s Grape”, with the two old pals intuitively riffing through the somewhat complex chord structure and burning the club up in the process.

What advice does he have for upcoming musicians? “Keep doing what you believe in.  Everyone is going to weigh in with advice, with critiques and with praise.  Don’t take too much of it to heart either way.  Keep your own counsel and do your thing.  If there’s a space for it, folks will hear it – work hard but don’t try to force it.  I worked so hard with different bands, different labels, to try to get heard, but everything that got me where I am is mostly just down to practicing a lot and treating people with respect.  Sometimes, especially when you’re young, you’re impatient to make things happen and it’s kind of hard, but the best things that have happened to me were all happenstance – I didn’t plan them. You COULDN’T plan them.”  Now, as Koch embarks with what he feels is the best representation of him that’s ever been out there, you’re going to be hearing a lot more from the Gristlemaster, and listening to him sonically weave his way through whatever the future holds. There was already one Mascot Label Group release from this trio, 2017’s TOBY ARRIVES.  Watch for a new Fall 2020 release on Mascot’s new imprint, The Players Club. Beware, mortals!