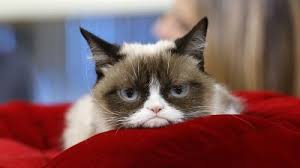 The 7-year-old meme-machine kitty from Arizona, whose real name was Tardar Sauce, encountered fatal complications after a urinary tract infection, a tweet entitled “Some days are grumpier than others” revealed Friday. She died peacefully in owner Tabatha Bundesen’s arms.

Besides being our baby and a cherished member of the family, Grumpy Cat has helped millions of people smile all around the world — even when times were tough,” the tribute reads. “Her spirit will continue to live on through her fans everywhere.”

Grumpy Cat’s sour-puss expression was the result of dwarfism and an underbite. She rose to fame in 2012 after Bundesen’s brother Bryan uploaded a photo of her to Reddit, claiming a “best cat on the internet” award the following year and raking in money for her owner. She even inspired a 2014 Christmas movie. 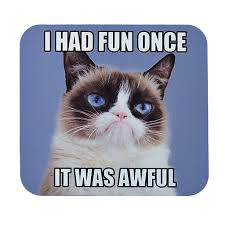 She will be greatly missed. Our hearts go out to her family and fans. This fan will miss her