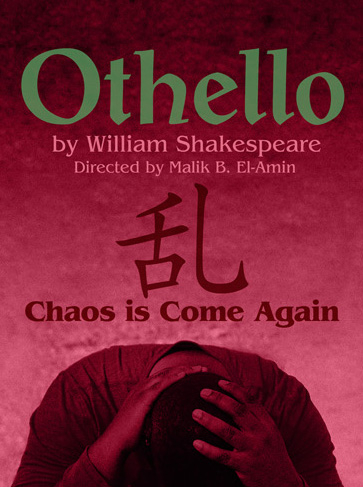 —by Dr. Laura Wilhelm, LauraWil Intercultural
Los Angeles, CA (The Hollywood Times) 9/16/18 – Old wine in new bottles doesn’t always taste delicious, but such was definitely not the case when this reporter attended the opening night of Shakespeare’s OTHELLO performed by the Griot Theatre of the West Valley at The Actors Company Theatre located at 916 North Formosa Avenue in West Hollywood.  The September 15th performance illuminated the artistic values of INNOVATION and INCLUSION. 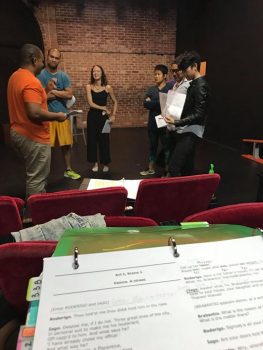 Taking place in a dystopian East Asian future, Griot Theatre’s production of OTHELLO explores rarely-considered Black/Asian relations and tensions.  A female Iago, here brilliantly played by Hazel Lozano, adds to this new spin on Shakespeare’s classic tale of love and deceit.
“I don’t want to do something just to do it,” said Malik B. El-Amin, Griot Theatre’s African-American co-founder and artistic director, during a brief after-show interview.  “But if it truly enhances the themes of the play, it’s worth trying.”
El-Amin’s risky production paid off.  Iago deftly manipulates the mutual destruction of Othello the Moor (Malik B. El-Amin) and his Asian bride, Desdemona (Alexandra Hellquist).  “I am not what I am,” Iago demonically gloats in one of the best-known quotes from all of Shakespeare. 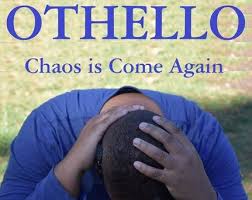 So what IS Iago?  A shape-shifting Machiavellian sociopath, perhaps?  Surely Shakespeare encountered this type many more times than once in the courts of Elizabethan England.
The play raises timeless questions about prejudice and personal responsibility.  Are Othello’s jealous rages really signs of fatal flaws in himself?  In Africans?  Or do the flaws lie in Iago?
More ambiguity is found in the fact that the roles of the lily-white Desdemona and the lowly prostitute Bianca (‘white’) are here portrayed by the selfsame actress.  This Madonna/whore contrast evokes Iago’s chaotic desire to stain spotless reputations and ruin loving relationships. 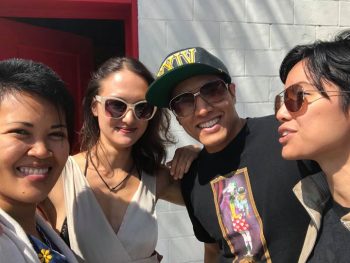 The many delights of this production include realistically shabby soldiers’ costumes and rousing martial arts-style swordplay.  Enjoy them while you can before the tragic sadness of the story starts to overtake you!
OTHELLO runs from Saturday, September 15th through Sunday, October 7th, 2018 with closed-captioned shows on Sunday, September 23rd at 4 p.m. and Saturday, September 29th at 8 p.m.  General admission is $25 ($17.50 for seniors).  For tickets and more information, please follow this link.

About Griot Theatre of the West Valley (founded in 2011)

Griot (pronounced GREE-oh) is of French origin and is a term used throughout West Africa to describe a story-teller who preserves the history and culture of a village or community.  These story-tellers keep an oral tradition which allows for the histories, myths, and culture of a people to be passed on to each new generation.

MISSION:
To create a forum for professional theatre artists from underrepresented groups – including women, artists of color, and artists with physical disabilities – to interpret theatre in new and evocative ways.  Specifically, Griot Theatre will produce classics, established plays and new plays.
Advertisement
VALUES:
Griot Theatre of the West Valley is dedicated to creating professional, resident, live theatre in the West San Fernando Valley. In order to achieve the best possible theatre experience we will offer the following:

Quality:Focus on collaborating with the finest directors, actors and other theatre artists available in the country.  Seek to create opportunities for actors from underrepresented groups – including ethnic minorities, women and actors with physical disabilities – to perform non-traditional roles.

Accessibility:Make productions accessible to deaf and hard-of-hearing audiences with the use of captioning, sign language interpretation, and “hearing loop” technology.
(Note: Malik B. El-Amin is himself hearing impaired)