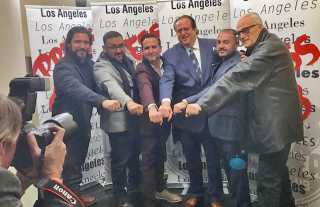 Los Angeles, CA (The Hollywood Times) 2/22/19 – The Los Angeles Press Club (LAPC) gave their 4th Annual Veritas Award – honoring Green Book – Thursday night. LAPC states: The Veritas Award is for the Best Film Based on or Inspired by Real Events and People. The contest is judged by members of the LAPC — based equally upon fidelity of subject matter and artistic excellence. Present for the award was Nick Vallelonga, one of his partners – Brian Currie – was not feeling well. Several cast members sat in the theatre.

Green Book, from Participant Media and DreamWorks Pictures, is inspired by the story of an unlikely friendship that formed in the early 1960’s between Tony Vallelonga (writer Nick’s dad, played by Mortensen), an Italian bouncer, and Dr. Don Shirley (Ali), an African-American pianist and composer. The story begins when Tony is hired to drive Dr. Shirley through the deeply segregated South on a two-month tour. Along their journey the two men gain a new understanding and honest respect for one another. Green Book illuminates the power of empathy and understanding to scale the social and cultural walls that divide us. (LAPC)

During the Q&A Nick Vallelonga repeatedly answered that he had made a movie about a story of the friendship between two men (his father and Dr. Shirley) and the changes they made in each other. Respecting what both subjects – especially Dr. Shirley – wanted revealed was important to him. Questions of why the Shirley family were upset that Dr. Don Shirley wasn’t portrayed as purely as they felt he should, Nick explained in various ways the same answer. Dr. Shirley told him what he wanted in a story and what he didn’t want and he didn’t want to be alive when it happened. The Shirley family were never a part of contact for the movie or the original story. Oddly enough, both Nick’s father, Tony “Lip” Vallelonga and Dr. Don Shirley died within months of each other in 2013. Most questions had been answered in countless reviews of the film and in other Q&A’s.

The repetitive questioning – in asking the same question or hidden in the form of statements – showed how very timely this film is. One man brought Vallelonga’s personal politics up asking if it would affect his run for Oscar gold… a woman stated that she felt there wasn’t enough about the actual green book that existed to satisfy her as an African American and what had Vallelonga hoped to achieve politically and socially with the film? Then of course the gay scene was called into play as a beautiful way to illustrate a part of someone’s life without it becoming an “issue”. What started as a ceremony to celebrate what the award stands for began to slowly unravel into the politic climate of today until a woman raised her hand and said, “You made the movie you wanted to make based on honoring the subjects’ requests and everyone has an opinion about something but your personal politics are now being questioned… you shouldn’t have to answer to that or defend yourself. You made a beautiful film that is designed to get people to open their eyes and have a dialogue.” Mission accomplished!

On the LAPC release this was sent, “Knowledge is the key to evolution and justice—for society at large and, more poignantly, to us all on a human level. It’s therefore fitting that our members would choose Green Book for the Veritas Award. The film shines a powerful light on America’s painful racial history and reminds us of the inequality that still exists while giving us hope,” said LA Press Club Executive Director Diana Ljungaeus. 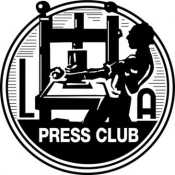 In a joint statement – producers Jim Burke, Charles B. Wessler, Brian Currie, Peter Farrelly and Nick Vallelonga said, “Thank you Los Angeles Press Club for honoring Green Book with your distinguished Veritas Award. To know that your members, journalists of the highest standards, voted for us to receive this accolade makes it even more meaningful. Green Book is a film about love and hope, and we are beyond thrilled that you are acknowledging us. It is a great privilege to be recognized by such a longstanding, distinguished organization.”

Kudos to you and the other writer/producers, director, cast and entire production team for bringing forth one portion of your father’s life with a very special friend. Vallelonga said he had at least 10-15 stories he could do on his father but that he knew this one was a hit.

The Universal Pictures’ Academy Award  nominee Green Book, written by Nick Vallelonga, Brian Currie and Peter Farrelly; directed by Farrelly and stars Viggo Mortensen and Mahershala Ali. The film has won multiple awards, including the Producers Guild of America award and the Golden Globe for Best Picture, Musical or Comedy. It has also been nominated for five Academy Awards, including Best Picture.