Great Performances: The Sound of Music will debut on PBS stations nationwide Friday, November 9th at 9pm (check local listings) and stream for a limited time beginning Saturday, November 10 on PBS Passport via pbs.org/gperf and PBS apps. Here is an embeddable clip of one of the most beloved songs from the iconic music musical: 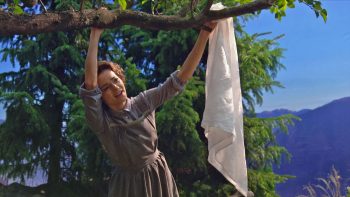 Beloved by generations of audiences worldwide, “The Sound of Music” tells the inspiring true story of the von Trapp Family Singers and their escape from Austria during the rise of Nazism. Rodgers and Hammerstein’s 1959 hit stage musical garnered five Tony Awards, including Best Musical, and the blockbuster 1965 movie adaptation won five Oscars, including Best Picture.

Cinematically photographed on adjoining sound stages, the production offers a more naturalistic interpretation of this great classic of the American musical theater.

Among the many classic songs featured in the score are “The Sound of Music,” “My Favorite Things,” “Do-Re-Mi,” “Climb Every Mountain,” “Edelweiss” and more.

The first film in Great Performances’ “Broadway’s Best” lineup, the recent Tony-winning adaptation of the classic An American in Paris The Musical, premieres tomorrow evening at 9pm on PBS and will be available for streaming beginning Saturday, November 3 at pbs.org/gperf and PBS apps.

Relive the magic of George Gershwin’s 1928 composition “An American in Paris,” which he described as an extended symphonic tone poem.

This new Broadway production was recorded in 2017 in London with original stars Robert Fairchild and Leanne Cope.