Los Angeles, CA (The Hollywood Times) 3/10/22 – Coming to Laemmle Theatres in Los Angeles on March 11 and recently at the AFI Film Festival in November 2021 is Sebastian Meise’s gripping film Great Freedom (Grosse Freiheit, Austria, 2021), winner of the Un Certain Regard Jury Prize at the 2021 Film Festival and Austria’s submission for consideration for the 2022 Motion Picture Academy Oscars. Hans (Franz Rogowski) finds himself in the same high-security prison for a succession of homosexual acts, reprimanded specifically for being caught in the act of doing, a man who endures repeated shorter spells in prison as he keeps being punished for his homosexual desires and his evolving relationship with his recurring cellmate Viktor (Georg Friedrich), a convicted murderer in it for the long haul.   The recurring figure in each historical era – 1945, 1957, and 1968 (the year prior to decriminalization) are the timestamps – is one Viktor (acclaimed Austrian actor Georg Freidrich), serving a life sentence for murder and, initially at least, a raging homophobe. The men’s relationship develops fascinatingly, into something like a romantic bond, but also not quite. Great Freedom is Austria’s submission for Best International Feature Film at the upcoming Motion Picture Academy Awards in 2022.

This gripping, tender-hearted prison drama centers around the larger issue of how Paragraph 175, which became part of the German Empire’s criminal code in 1871, criminalized and punished sexual relations between men across Europe. It remained a part of German criminal codes in various forms until 1994. In 1935, the Nazi regime revised Paragraph 175. The Nazi version of the statute allowed the regime to target far greater numbers of men than previous governments; most men arrested under Paragraph 175 were given fixed prison sentences. Some of these men, however, were sent to concentration camps for indefinite terms. Paragraph 175 remained in effect after the end of World War II in West Germany (FRG) until 1968, but that was not the case in East Germany (DDR), where homosexual sex was not illegal.

Years pass in the blink of an eye in Meise and Thomas Reider’s elegantly structured script, which burrows in and out of timelines to convey the sense of time passing and stalling all at once. Following a Super 8-shot credits montage of men cottaging in a public bathroom – the eroticism of which is stopped short by the revelation that it’s police surveillance footage – we begin in 1968, with Hans arriving in prison for yet another arrest for a homosexual act. Viktor acknowledges his return with a wry lack of surprise; Hans’ shrugging self-deprecation can’t quite conceal his weariness. 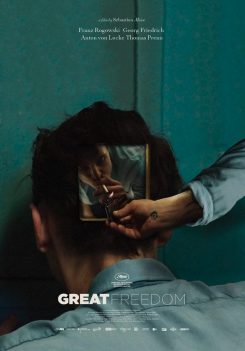 After Hans defends a younger gay inmate in a prison-yard fight, he’s thrown into solitary confinement – and it’s this dark, windowless cell that becomes the film’s portal between decades. We emerge into 1945, as Hans, having survived a spell in a Nazi concentration camp, is cruelly transferred directly to prison to complete his sentence. There, he’s paired for the first time with Viktor, who identifies as straight and doesn’t take kindly to sharing a cell with a gay man. We already know that their relationship has warmed somewhat over time; the film’s slip-sliding chronology, alternating between these periods and a 1957-set middle section, gradually reveals how.

Though Hans finds a succession of lovers in prison, the film remains focused on Hans’ relationship with his cellmate Viktor: Meise charts the evolution of Hans and Viktor’s relationship from hostility to passive-aggressive acceptance to mutual dependency. Most of the shifting affections and nuances between them are unspoken, beautifully conveyed by the actors. Great Freedom wisely eschews contrived aging makeup, trusting its stars to project 24 years’ worth of wear and tear. Friedrich maintains Viktor’s gruff, callused demeanor, but there’s an increasingly defensive softness to his body language; Rogowski’s Hans, if anything, toughens with time, though his face bears his exhaustion over repeated persecution merely for living his life.

This is an existentialist German art film, so naturally, Kafka is the place to draw precedent. Rogowski’s character, Hans Hoffmann, really is the ultimate individual “arrested one morning without having done anything wrong,” to quote the infamous opening sentence of The Trial – the supposed “crime” being the practice of homosexual relations. The self-evident horror of his concentration camp experience has clearly determined Hans’ guarded approach to life, but that, too, is a blank space in Great Freedom. Where much study of Paragraph 175 – including Rob Epstein and Jeffrey Friedman’s 2000 documentary Paragraph 175 – focuses on the law’s application in Nazi Germany, Meise is out to depict the ongoing damage it caused in a supposedly more liberated post-war society. The title, too, comes with a qualification: Though the law was loosened in 1969, it would be another 25 years before it was abolished entirely in 1994. Time marches on in Great Freedom, except when it stands still for years on end.

Meise’s film is an exquisite blending of personal, political and sensual storytelling, its narrative and temporal drift tightened by another performance of quietly piercing vulnerability from Franz Rogowski. Great Freedom arrives a full 10 years after Meise’s first fiction feature, the complex, controversial family drama Still Life, and duly confirms all the poised promise of that debut – once more taking a delicate, empathetic approach to explicit material. Winner of the runner-up prize in Un Certain Regard at Cannes, the film has been picked up for distribution by The Match Factory.

One might wonder what happens to Hans after the repeal of Paragraph 175 in 1969 and his release from prison. I don’t wish to provide any spoiler alerts but Hans will find the new gay scene quite strange. Entering a gay bar with the name “Grosse Freiheit” (Great Freedom) boldly in neon, Hans will question once again the boundaries of homosexual desire and the nature of same-sex relationships. This last five-minutes of the film are a challenging commentary on the sexual fantasies of many gay men today as they assume they are “free” and yet trapped in the prisons of their own making.