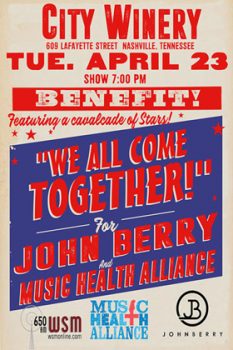 During the initial planning of the benefit, Berry expressed his wishes to share the financial blessings and gift a portion of the donation money raised from the star studded country music concert and fundraising efforts. The funds raised will offset the medical expenses for treatments not covered by insurance for John Berry and benefit the endeavors of Music Health Alliance to assist others in the Nashville music community.

“As I said before. Thank you is not big enough, incredible is not incredible enough and amazing is not amazing enough. I am honored, humbled and grateful for the love shown to me and Robin. It is my hope that in the future as I continue to heal and get back to playing music, that I can pass on that huge amount of love I received to others. Whether it be for folks in the music community, family, friends or fans, I want to give back what has been shown to me,” shares John Berry. “I am so happy that Music Health Alliance is a recipient of all the love shown from the special night. MHA has been there for my family for several years, providing answers and assistance for all our health insurance needs.”

“For most of our  lives John Berry’s music has touched our hearts,” stated CEO/Founder; Tatum Allsep.  “Now the generosity of John and Robin Berry will enable Music Health Alliance to heal the hearts of music makers as well. We are profoundly grateful.”

“We All Come Together” for John Berry and Music Health Alliance was held on April 23rd at City Winery Nashville.

About John Berry:
GRAMMY Award-winning country star John Berry continues to celebrate the 25th anniversary since signing his first record deal and has recently charted at #30 on the Music Row Breakout Charts with the single, “Beautifully Broken,” which is featured in the soundtrack for the upcoming movie of the same name. Berry has placed 20 singles on the country hit parade charts, six of which went Top 5 as well as a No. 1 on the Billboard and Radio & Records country charts. He has earned numerous Gold and Platinum records. Berry’s co-written “A Mind Of Her Own” and “Kiss Me In The Car” introduced him to radio audiences in 1993. Then, “Your Love Amazes Me,” “What’s In It For Me” and “You And Only You” thrust him to stardom in 1994. “Standing On The Edge Of Goodbye,” “I Think About It All The Time,” and “If I Had Any Pride Left At All” were all major hits the following year. “Your Love Amazes Me” earned Berry a 1995 GRAMMY nomination.

In 1996, he scored a GRAMMY win for his participation in Amazing Grace: A Country Salute to Gospel Vol. 1. Berry took “Change My Mind” into the country music Top 5 in that same year. “She’s Taken A Shine” became an even bigger hit in 1997. The same year, he was nominated for CMA Vocal Event of the Year for “Long Haired Country Boy” with Charlie Daniels and Hal Ketchum. Both fans and the media took note when “There He Goes” was released as a 1999 duet with Patsy Cline. Berry’s two most recent albums, What I Love The Most and his holiday album, Christmas, are both available now on his website as well as iTunes and other digital retailers.  Berry’s TV show, Songs & Stories with John Berry, airs weekly on Heartland Television, The Family Channel, The Country Network, Roku (via Heartland), AMG TV, Country TV (New Zealand), and Keep It Country TV (UK). For more information, visit songsandstories.com. Follow John on his website at www.johnberry.com.

About Music Health Alliance:
As advocates, Music Health Alliance fights so those in our industry never have to feel alone in a health crisis. The eight-person team at Music Health Alliance remove obstacles so patients can receive lifesaving care. Thanks to the direct efforts of Music Health Alliance, more than 9,700 members of the music community across 38 states and all genres of music have gained access to lifesaving heart, lung, kidney and liver transplants, medications to treat Parkinson’s, end of life care and many other crucial services. Since 2013, Music Health Alliance has saved over $40 Million dollars in healthcare costs including insurance premium savings, medical bill reductions and discounted medications. Its services are free to any person who has worked in the music industry for two or more years, or who has credited contributions to 4 commercially released recordings or videos. Spouses, partners, and children of qualifying individuals may also receive access to the non-profit’s services from birth to end of life. Learn more at MusicHealthAlliance.com. The non-profit’s FREE services, advocacy, education and preventative care initiatives are provided thanks to generous individual and corporate donors. Donations can be made at musichealthalliance.com. Members of the music community can contact Music Health Alliance at 615-200-6896 or info@musichealthalliance.com to learn more about their free services.