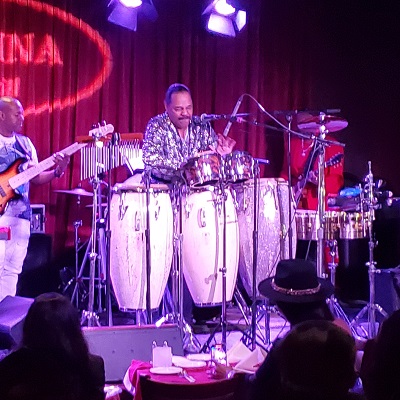 Hollywood, California (The Hollywood Times) 11/23/2022 – “It’s all about having great friends to be here to celebrate my 70th birthday with me, so get some interviews!” Victor Orlando told me at the start of the red carpet at the Catalina Jazz Club.

Let me tell you, his friends did not disappoint him. There was one right after another, but they all had to have their picture on the red carpet with the man of the hour.  Victor was all over that red carpet and he is just a hoot making all his friends laugh and smile.  The Hollywood Times was honored to be part of this birthday celebration.

The first friend of Victors to step off the red carpet was Tate Simms, musician, producer, composer and performer. Tate Simms was born in Manhattan and raised on the best music ever written. He’s an accomplished guitarist, bassist, vocalist and drummer. Tate’s also made an impact on the world performing with Grammy Award Winners Christina Aguilera and Joe Cocker. He was the bassist for Mary Wilson of The Supremes, Globus, and Latoya Jackson as well as being the musical director of that tour.  There’s a long list of amazing acts that Tate has worked with like Sir Cliff Richards, Esperanza Spalding, George Benson, and Paul Carrack to name a few. He is always moving towards getting the most out himself and everyone he works with.

Here is our interview.

Next up was Martin Kember, writer, producer, singer / songwriter. A highly anticipated new album “Consummate” was released this summer, and is lead by the release of the new single “U DESERVE IT GIRL” through a new deal with Grammy-Nominated Indy label “ML1”. The video for the single was filmed in the New Orleans area during May! Check out the recently released snippet of the single which has had up to 5000 plays in a span of the first five days, with many fans dubbing the track as the new SUMMER SONG! He is working on several projects for the upcoming 2023 year, so stayed tune!

Here is our interview: 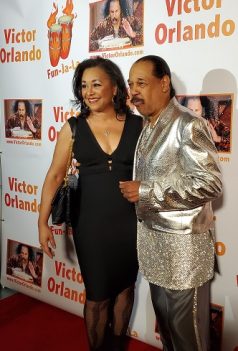 Gail Gibson – President and VP of Sales at NubianTV.net.  She has been a member of Screen Actors Guild since 1997 with two independent films to her credit as an actress, & Co-Producer, “Walk by Faith” and“ Outrighteous” and two television shows where she was Associate Producer, “BET’s Exalted” and “Black Family Reunion” in association with Momentum Entertainment.  Gibson, will continue to serve her non-profit as its President and Annual Lady in Red Gala, as well as Executive Produce several projects to be launched on the NubianTV.net platform.

Art Sims with 11:24 Design Advertising, the world’s best young urban entertainment advertising and marketing agency. Los Angeles based, concentrating on bleeding edge creative print, radio, and TV advertising campaigns for film, television and web companies. 11:24 has drawn on this knowledge to create award-winning creative advertising campaigns that have proven they are in tune with the pulse of the world’s film, TV and dotcom markets.  They know what it takes to attract, motivate, and capture these important markets with creative messages that young urban Americans can identify with and in media environments they utilize. They want to help you increase market share with young urban Americans.

Willard E. Pugh is an actor and producer, known for RoboCop 2 (1990), The Color Purple  1985)  and Air Force One (1997).  He was ready to talk about his buddy Victor Orlando. He had the best fringed tan jacket and an amazing belt buckle to go with it. He told me that I was NOT ready for this show tonight and that I was looking ready, but not ready for what I was about to hear, that my ‘ears’ weren’t ready. He made me laugh and said it was going to be off the chains!

It was great to talk with Anika C. McFall, she is my kind of gal, friendly and full of life and laughter.  Anika C. McFall is an actress, screenwriter, film producer, dancer and choreographer. She makes a living as a working Actor/Comedian, Producer, Writer and Dancer. A quadruple threat, she has had numerous roles in Film, Television and Theater productions as well as National Commercial and Print Campaigns. As a trained Actress, she has landed recurring, guest, and co-star roles and is striving for a series regular role. Other training and skills include Fight Skills, Stunts, Weapons, Sports, Flute and Dialects. In addition to performing and living her dreams out loud, Anika loves playing Sports, watching movies and philanthropy. She had the best outfit and amazing shoes, which you can see I had to take a picture of them.

I can’t wait to check out everything I can on the web about Anika and start following her career.  Enjoy our interview, which Victor comes along to put in his two cents!

Don THE1 Bell is best known in the local Jazz circles as “Saxophonist Extraordinaire” for his smooth and melodic, yet electrifying and explosive style of performing. The source of Don’s appeal is his ability to make us feel what he feels while playing a song; whether it’s the powerful, heart thumping beats of his up-tempo tunes or the irresistibly soulful sounds of his slower, jazzy emotions. Don’s brand of music fits in well with the Smooth Jazz or Wave format.

Marcus Nel-Jamal Hamm, acting and his career launched almost instantly beginning with a feature role on two of the final episodes of HBO’s “The Wire”. He’s continued to consistently gain momentum working as a television, theatrical, and commercial actor as well as being trained in stunt fighting for film and television. Marcus has also produced, written, and directed several successful projects and has recently gained international success after creating an award-winning hit cinematic fan film, The Black League of Superheroes, which he also starred in as 5 legendary superheroes including Black Panther and Superman. His next work will be his first Executive Producer role for a feature film where he also stars and co-wrote, “Heaven’s Revenge,” “I Love You to Death.” With even more projects on the way, Marcus Nel-Jamal Hamm is quickly gaining powerhouse status in the film and television industry.

Lawrence Hilton Jacobs, Larry became interested in acting and began studying at Al Fann’s Theatrical School and then with the Negro Ensemble Company. These are two all-black acting companies which produce experimental plays in New York City. They also train promising young black actors in the performing arts. With these companies, Larry acted in such plays as “Cora’s Second Cousin,” “The Dean,” “What the Wine Sellers Buy,” “Mask in Black,” and “The Exterminator.” None of these productions made him famous, but they did bring him to the attention of film casting directors. He was given parts in the movies Claudine (1974) and Cooley High (1975). Cooley High (1975) was Larry’s big breakthrough in show business. It was because of this film that he was given his ‘Boom Boom Washington’ role on Welcome Back, Kotter (1975).

He also had two important roles in major made-for-television features, “The Sojourner” and the tremendously popular Roots (1977). Besides acting, Larry also sings, plays the piano and writes music.

Here are several photos of Victor’s friends on the red carpet who came out to help him celebrate his birthday:

After the red carpet, Victor went into the green room to change his jacket and through the red carpet he went to take his place on the stage for some amazing music with his friends to entertain all of us that came out to see and hear him play and sing as well.  What amazing music they all made together.

The invited guest enjoyed delicious food, all types of drinks and music that had most of us dancing and clapping along to the beat.

The first guest that came up on stage to perform with Victor was Kenny Metclaff, an accomplished musician and vocalist, who recreates the multiple Grammy-winning legend Elton John and flamboyant superstar in each and every performance.  He was really good and had the audience singing along with him.

It was be a full night of Music and Comedy, from Victor Orlando & Fun-Ja-La, with special Celebrity Performers, containing the different eras of music involving The Artist. Music performed that evening consist of an Elton John Tribute Show, with Kenny Metcalf as Elton the early years, a total Latin Era of music, with the Santana Tribute Show.

Party Time with the Funk, with a complete Old Skool Funk Tribute with the Prince’s Musicology Show, with Martin Kember, from the 80’s group, Color Me Bad. To end the production, The band will be performing original music from his Grammy Nominated CD, and also new Music, that’s out Charting in the U.S. and the U.K.

Windy Barnes-Farrell also came up on stage to sing a couple of songs with her friend Victor Orlando. What a great voice Windy has.

After several sets of talented musicians that joined Victor on stage, it was time for his brother, sister and daughter, along with his friend Priscila holding the cake for a photo opportunity and his brother sang happy birthday to him.

It wasn’t long after that, the cake was cut, served to all his friends and it was delicious.  There were two poster boards with Victor’s photo on them for all of his friends to leave their well-wishes and autograph for him to enjoy for a lifetime. I signed the one with Victor playing his conga drum.

Here are a couple of videos of some of the performances:

Victor asks his friends to come up on stage and they all gathered up there and he told them how much they all meant to him and he thanked God for them and their friendship and told some stories about some of them and what they meant to him.  It sure was a great photo opportunity. 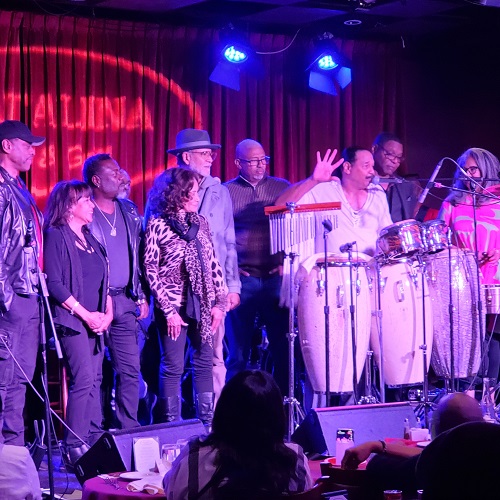 The Hollywood Times sure was honored to have been invited by Victor and Edna to cover this 70s at 70th birthday concert.  I can’t wait until next year’s birthday celebration!

I made sure to dress up in 70s attire. I also had the opportunity to get a photo with Victor on the red carpet.

These photos were taken by Donna Dymally Photography.