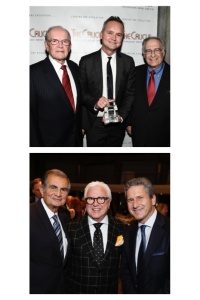 Los Angeles, CA — The Caucus for Producers, Writers & Directors’ 34th Caucus Awards was a fun, festive ceremony and dinner, held recently at the Skirball Cultural Center. Many industry heavy-hitters were in the room and diversity was exemplified throughout the night.

“As co-chairs of the Caucus we were, thrilled with the high quality all award honorees for this year’s Caucus Awards Dinner. They all exemplify excellence in the business of entertainment despite the constantly changing media landscape.  We are so grateful to have these wonderful individuals to be a part of the Caucus for at least one night”. Says The Caucus co-chairs, Robert Papazian and Tanya Hart.

Writer: Robert and Michelle King (“The Good Wife” & “In Justice”)

Caucus Executive of the Year Award

About The Caucus Awards Dinner

The Caucus’ new motto is “Leading the Evolution” and that’s what they have been doing for over 40 years.  Each year The Caucus honors outstanding creative television and new media talent at their Annual Awards Dinner. Awards are presented to outstanding individuals and three winners of the Caucus Honors from the list of nominees.  The Caucus Foundation’s student Gold Circle Award is presented to two grant recipients for their 2015/16 student films. In promoting the upcoming generation of television and new media content creators, The Caucus Foundation will also present the Television and New Media Award to a university’s creative team for an exceptional project.

A significant portion of the proceeds from the dinner will benefit The Caucus Foundation, which has provided grants and awards of $1.5 million to 154 worthy students to complete their film, television or new media projects.
About The Caucus For Producers, Writers & Directors
Linking the best of Hollywood’s and Television’s creative content providers (i.e. the top 100 Television producers, writers and program directors of Primetime, Daytime and Children’s programming) with the rest of the web world!  For the past 42 years in Network Television (and now in Cable and Satellite Television as well), The Caucus has provided a forum for the best and the brightest creative talent in Hollywood to network together as the ‘creative conscience’ of the Television industry.  The Caucus, as the leaders of the creative Television community, has always stood for better and more meaningful television.  That means Television Programs produced, written and directed in a working environment that supports the best product that we can create for our audience.