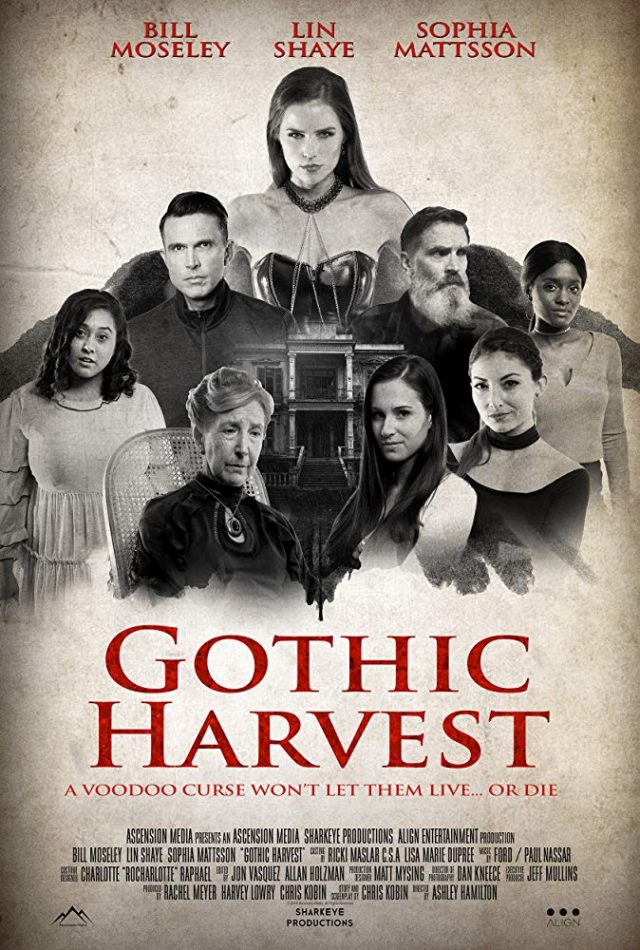 “Gothic Harvest is a fun, corny, campy-style horror flick that makes you smile, go, ‘ewwww’, and think, why is this happening?  All-in-all, Gothic Harvest brings a bit of horror to Mardi Gras and warns you; If you meet Sofia Mattsson (Amelia Boudine) in a dark alley with you partner, RUN!  Wait, ask for her autograph and a selfie, THEN RUN!”

GOTHIC HARVEST tells the chilling tale of four co-eds who head to New Orleans for Mardi Gras. When one of them disappears after connecting with a charming local, her friends race to find her before she falls victim to a sadistic Southern family plagued by a centuries-old voodoo curse.

Opens with a man and two women, Amelia (Sofia Mattsson) and Brianna (Michelle West) getting it on but our ‘boy wonder’ needs to take a bio-break which may be his undoing. Being the typical man, while he’s gone, Amelia puts something in his beer and he goes night-night, while Amelia takes Brianna to go and explore. The plot thickens.

Then a the “Chicken Man” (Clyde Risley Jones), approaches 4 new women out enjoying Mardi Gras, Hope (Abbey Gayle), Benay (Ashton Leigh), Tina (Mary Alice Risener) and Katie (Tanyell Waivers), and gives one of them a chicken foot for a…price!  If you’ve never been to Mardi Gras, you’re in for a treat, or not. It’s the culmination of Fat Tuesday and partying before Ash Wednesday. While the other three party on, Hope meets Gargol (Ashley Hamilton) at the bar and he takes her for a ‘ride’… in his old Nissan 280Z. Hope, being a little tipsy and heads out with Gargol for fun.

Hope’s three friends are waiting and wondering what to do while discussing plans over their morning lattes. They decide to engage Det. Hollis, who’s all too eager to get it on with them, who could be his daughters. Eeew! But I digress. Det. Hollis is left with one of them because she “knows how to ‘hook him’” and while in his truck, which didn’t take long for Det. Hollis to accomplish, he’s spouting bad pickup lines like, “You look like your mother,” or “Your ass looks great but you’re sitting on it,” or better yet, “If I said you have a beautiful body would you hold it against me?”. Watch the movie to see all the rest on his cell phone.  I wouldn’t use any of them unless I wanted to get ‘whacked’ but go ahead and use them, at your own risk.

Moving on, shall we?

Then in a bedroom, we find Hope with her wrists so loosely bound that she can easily pull her wrists out, a pink ball gag in her mouth (how cute), and hooked up to a IV that shares her blood with an old woman (Blanche Boudine), whose umbilical cord is still connected to a baby in a crib, who’s next to Hope. Too weird!

Griselda Boudine wheels herself in the bedroom to administer the daily injection of something that gives her a rise, but before that, she shares her life story with Hope. Griselda tells of how her aristocratic, wealthy French-born family moved to New Orleans in the mid-1800s to make their way in America. Then their beautiful youngest daughter, Blanche (Gigi Zumbado), cross paths with the fiancé (Yohance Myles) of the legendary Queen of Louisiana Voodoo, Marie Laveau (Janee Michelle). They have a baby and try to keep it a secret, but Madame Laveau finds out and decides that the entire family deserves the focus of Laveau’s most destructive curse. Then Griselda smiles and injects Hope’s IV with what’s in the syringe, shakes and laughs as she watches poor, poor, Hope writhe in pain. Muahahahahaha, Muahahahahaha!

This feels like a B-side of a 45rpm (for those reading don’t know what a 45rpm is, it’s a vinyl disc that had a “hit” on one side and on the other side (the B-side), was another song the record company thought you may and hope will like).  The music is a smattering of metal, opera, and psychedelic which fits and yet doesn’t fit with this movie.

The movie has great actors in it and in the beginning, I just wanted to flip it off, and I’m being honest here, but as it moved forward, I kept it going.  I’m glad I did. It’s a fun movie, and the story is interesting which the end has a twist which I didn’t, but “did” expect. Yeah, I know, twisted but not, right?

The flashback scenes used to give you a sense of the evil curse, were melded together were disjointed, seemingly thrown together and could’ve been done a bit better.  What I note in films in continuity. What this is, is the similar things within a scene, when you cut from shot to shot, need to be continual. For example, I was watching Magnum P.I. last night and when Magnum and Robin were riding in the car, they didn’t have seat belts on. But in the next seen, pulling up to a crime scene, you see them with the seat belts on.

This happens a lot in films and being a screenwriter, I pay attention to detail.  So it is with this movie. In the bedroom scene, with hope, her binds on her wrists between cuts in the scene are different. This tells me that they didn’t shoot the scene on the same day or they didn’t put the binds back. How can I tell? Hope was “holding” the binds with her fingers in one shot and in the other, her hands where opened with the binds definitely showing tied differently and somewhat tighter.

This movie doesn’t rise to the level of some of the other movies I’ve seen, like “Bit”, “Good Kisser”, and others, but it makes you smile. I can tell that this was just a good, fun, movie with all it’s quirks, bad inuendo, and perversions.  I love Sofia Mattsson for her look, power and character. Bill Moseley portrayed Det. Hollis as I would expect. He just was a perverted old man trying to get it on, with women he had no business trying with and should only limit his activities to the internet or for him, old magazines keeping him ‘off the streets’ and away from all women!

Lin Shaye did a great job with Griselda. Love her evil character that love to inflict pain on her victim because that’s the only enjoyment she seemed to ever get. Then there’s Ashley Hamilton’s character, Gargol.  Ashley is the mixture of the nice-guy wanting to get his gal combined with the evilness of Dexter. So much fun in one man and someone the team with Criminal Minds would contend with. Ciara Rizzo played Dolly, a demented young girl in an adults body, still wanting to play with dolls and those dolls are: Human dead women provided by Ashley’s character, the demonic, Gargol.

All in all, when you go to Mardi Gras and you’re a woman who meets Amelia Boudine and wants to get it on with you and your boyfriend, RUN, just RUN right into the arms of Det. Hollis and his truck where you can dump your boyfriend and sit in Det. Hollis front seat and enjoy him reading pickup lines off his phone.

SCREWDRIVER: An Interview With Cairo Smith