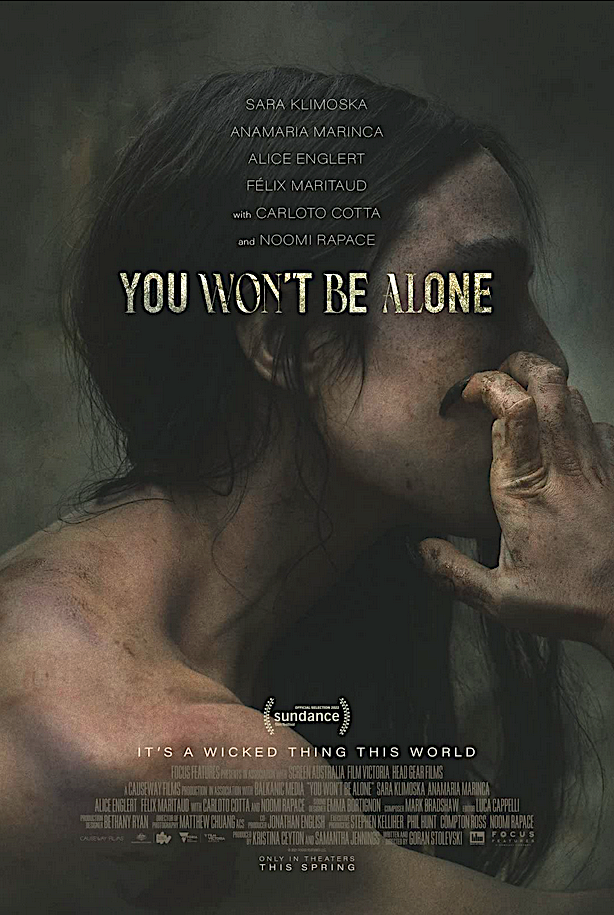 Los Angeles, CA (The Hollywood Times) 4/1/22 – Screening at selected theatres in Los Angeles is Goran Stolevski’s You Won’t Be Alone (Australia, 2022), an arthouse folk horror film that is a hauntingly humanistic fable about ancient witches struggling to make sense of the austere world around them. This debut feature film by Goran Stolevksi premiered recently at Sundance 2022 and earned the director an award at the Palm Springs International Film Festival 2022. You Won’t Be Alone uses a simple horror premise to illuminate weighty themes of motherhood, jealousy, connection, and place. It’s a challenging, beautiful work of immense power, steeped in Macedonian folklore. “It’s a burning, hurting thing… this world,” intones a solemn narrator. It’s even more burning when you’re a witch!

More bloody than scary, and at times quite sexy, it often plays like a silent movie, with characters expressing their emotions as they wander through a magnificent rural landscape. (The film is subtitled, and the language is said to be authentic to the period). Stolevski employs a voiceover and tinkling piano score to create a mood more that is precious, but also dangerous. Yes, the sun-dappled farmland is gorgeous but there is a danger lurking at every turn. Stolevski himself is of Macedonian origin and chose to draw on folk legends from Macedonia.

Everyone in the Macedonian mountain village in the 19th century knows the tale of Old Maid Maria (Anamaria Marinca, known for her lead role in 4 Months, 3 Weeks, 2 Days), who is a Wolf-Eatress whose skin looks like the arteries are on the outside. She is a 200-year-old witch who can shapeshift into any creature of her choosing. The legend excludes Maria’s desperate loneliness, forever doomed to roam the 19th Century Macedonian wilderness alone. It’s this yearning for companionship and motherhood that leads her to the newborn Nevena. Maria makes a pact with Nevena’s mother to spare the child until her 16th birthday when she will return to take possession of the young girl.

Sent to live in a cave for protection, Nevena (Sara Klimoska) emerges as a teen, following Maria the ancient witch out into the world. Old Maid Maria teaches Nevena how to live outside in nature. But Nevena is a disappointment to Maria, and the teen rebels, hoping to break the prophecy. As is soon revealed, these so-called “witches” can shapeshift into animals and other beings. The origins of Maria’s witchcraft in her futile attempts at finding a husband are revealed late in this grim fable.

Discovering the witchery lore at the heart of You Won’t Be Alone is its initial appeal. What do those strange markings on Nevena’s chest mean? Why do the witches covet the body parts of their victims? What is a witching spit? These questions would be enough to sustain most horror films, but Stolevski has more profound questions to ponder. Namely, can the ultimate outcast find a sense of connection in the world?

Much like the film itself, the answer to this question is complicated. The young Nevena (Sara Klimoska), now transformed into a witch by Maria, takes many human forms as her own. She experiences the cruel subjugation of being a woman (Noomi Rapace as “Wife-of-Boris”), the charmed existence of unjust men, and the joyfulness of an innocent child. Nevena even falls in love and becomes pregnant. Still, the ever-present threat of discovery haunts her. In this burning, hurting world, the outcast is always a visitor.

When Nevena shapeshifts to Bosilka (Noomi Rapace) she comes to understand her powers, seducing a man and luring him for sex where she transforms him. There is a clear reference to vampirism here, with blood-drinking, sharpened fingernails (instead of fangs) and the idea of passing on a curse.

As You Won’t Be Alone continues, the film plays up the conventions of marriage as the recounting of Old Maid Maria’s tale concerns her efforts to find a husband. There is a horrific episode that reinforces ideas of conformity, followed by a rather moving (and mostly wordless) love sequence between Biliana (Alice Englert) and Yovan (Félix Maritaud). These scenes are sensual but fleeting – the witch will always have her way.

Stolevski thoroughly immerses the viewer in the strangeness of this place in the mountains. Set in an abandoned Serbian village, you can practically hear the crumbling of decrepit structures. Because Nevena was struck mute by Maria the aged witch, there is very little dialogue. Instead, we hear Nevena’s internal monologue; twisted, halting snippets of cryptic rantings, disturbingly vague yet sharp as a knife. “Me, am I devils?” she wonders. How could she possibly separate her own evil from the devils that dictate the reality around her?

And yet there are moments of uplifting beauty that sustain Nevena. Tiny moments, like playing a game with the other girls or exchanging a coy grin with one of the boys, draw her tightly to a larger community. It’s Nevena’s attainment of love and connection that both inspires and infuriates Maria, who is incapable of seeing anything apart from suffering.

Stolevski’s film is compelling but not necessarily suspenseful. While there is a strong sense of dread throughout, the motivation for all the violence, when revealed, seems underwhelming. Bad things do happen in You Won’t Be Alone, but the film relies on emotional connection and a supernatural atmosphere which tend to mute the horror. Gory, but arty, You Won’t Be Alone is not your typical horror film. It is the story of two outcasts who cannot escape one another. The jealousies and yearnings that drive them are far more ancient and powerful than the witchcraft that binds them.

Stolevski has been lauded for his fantastic shorts, especially You Deserve Everything (2016) and Would You Look at Her (2017), the latter being a Sundance winner. Recently Film Independent screened You Won’t Be Alone, and it is playing at the Alamo Drafthouse Theatres in Downtown Los Angeles and at several Laemmle theatres in Los Angeles.