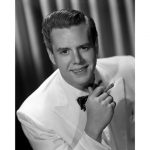 Desiderio GoldAlberto Arnaz III was born in Santiago, Cuba on March 2, 1917, where he spent his childhood before immigrating to the United States during the Cuban Revolution. After arriving in America without a penny to his name, the young Arnaz worked hard to eventually find success as a musician. A major turning point in his career came after he landed a role in the 1939 Broadway production Too Many Girls as well as a film adaptation of the same play just one year later. It was on this set that he met his co-star, future wife, and lifelong friend Lucille Ball.

In 1950, after advancing his career as both an actor and a musician, both Arnaz and Ball pitched CBS on what would eventually become the hit American TV sitcom I Love Lucy. Network executives were initially concerned that Arnaz’s accent would affect his credibility as Ball’s husband, so the pair produced a pilot with their own money, ultimately winning support for the creation of the show.

I Love Lucy ran from 1951 to 1957 and was the most popular TV show in America for four of its six prime-time seasons. At one point, it attracted an estimated 44 million viewers for a single episode—more than watched the inauguration of President Eisenhower! As part of their production deal, Arnaz and Ball retained all rights to the content, enabling them to sell the series into syndication.

Today, Arnaz is widely considered a trailblazer in the American entertainment industry, even being credited with inventing the rerun. In 1956 he won a Golden Globe for Best Television Achievement, an award which recognized his impact on American comedy both in front AND behind the camera. He was also awarded not one, but two stars on the Hollywood Walk of Fame for his contributions to both Television and Motion Pictures.

Here’s to Desi Arnaz, whose beaming joy and laughter continues to bring delight to living rooms and viewers around the globe.

Special thanks to the family of Desi Arnaz, particularly Lucie Arnaz Luckinbill and Desi Arnaz, Jr., for their partnership on this project. Below, they share their thoughts on the Doodle and their father’s legacy:

We could not be more thrilled that Google is honoring our father with this Doodle on what would have been his 102nd birthday. He first came to the U.S. in 1933 as a 16-year-old penniless immigrant seeking asylum from a revolution in Cuba which destroyed his family’s home and belongings as well as imprisoned his father. Barely speaking English upon his arrival, he quickly utilized his raw musical talent and innate business sense to begin his ascent in the world of entertainment. His humble beginnings included cleaning bird cages to buy another guitar, and he eventually formed the first Latin band in Miami, introduced the Conga dance craze to the U.S., and was cast in a hit Broadway musical before heading to Hollywood to act in films.

Dad went on to marry his first film co-star Lucille Ball, and their combined genius created I Love Lucy and formed Desilu Studios. The two quickly became the most iconic duo in American television history. Because of his strategy to put I Love Lucy on film in front of a live audience, almost 70 years later, fans all over the world are still able to enjoy not only this revolutionary TV comedy, but all others that have since been produced using Desilu’s groundbreaking techniques.

As his family, we have wonderful memories of him as a Dad and a Grandpa. At home, he was a great cook and entertainer. He loved to create laughter and filled our home with music and fun. He loved spending time with us in the pool and showing us each and every sunset. Wherever we went, he was the leader and we were his band. But he also had his personal struggles. Because of pains too deep to reach, he struggled with alcohol addiction later in life and a love of cigarillos, which eventually caused him to leave us way too soon. He lived life with enormous passion. He was incredibly generous. He was likable. He was fallible. He was human.

We are so proud that he is being recognized for his talent and his gifts of entertainment. Desiderio Alberto Arnaz III was a one-of-a-kind innovator and trailblazer, and we wish he could have lived to see this special acknowledgment of the lasting contributions he gave to the world.

Todayś Doodle can be seen in Cuba, the United States, Argentina, Bulgaria, Chile,  Israel and Peru, Go to Google Arts and Culture to see a comprehensive exhibit of the works of Desi Arnaz.