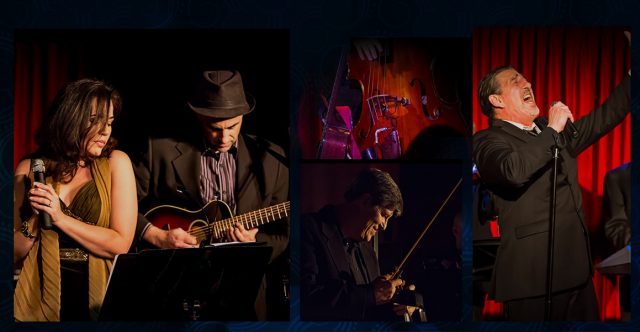 Newport Beach, CA (The Hollywood Times) 3/8/201– On a pleasant Sunday night at the stroke of sunset, Campus Jax in Newport Beach played host to the eclectic music of Paris Chansons, an international Jazz sextet that delivered their own version of French cooking for a friendly, enthusiastic outdoor audience of over 100 guests, socially distanced in a huge tent.

Paris Chansons describes itself as a French band with a twist. It gives you oldies from songbooks of Piaf and Aznavour as well as Euro classics laced with folk melodies from Italy, Russia, and Eastern Europe. The group is well drilled and combines Jazzy improvisation, Gypsy violin, and the charisma of lead singer Julia Kantor to irresistible effect.

Probably the most talented musician being Endre Balgoh and his gypsy violin.  He has performed as violin soloist with the Berlin Philharmonic & many other worldwide symphony orchestras as well as countless other European ensembles.

He is an accomplished chamber music performer and toured throughout the United States, Canada, and Europe with the Pacific Trio for nearly 30 years. He has also collaborated in concert with such luminaries as Vladimir Horowitz and Leonard Pennario as well as in the acclaimed series of 1993 chamber concerts: “André Watts and Friends.”

Paris Chansons is the musical baby of husband and wife team Jacob and Julia Kantor. Julia is Ukrainian-born but spent her formative years in Paris absorbing the music and culture while hubby Jacob is a Russian-born singer/songwriter/guitarist whose energized guitar work is the beating rhythmic heart of the ensemble.

Campus Jax owner Jack Jasper has done a good job providing the Newport Beach citizenry (and beyond) a socially observant, first-rate entertainment option on Sunday nights.  This time around, though, no dancing was even allowed out by our car nor did we get to say hi to the entertainers unless we went outside the tent.  So sad and so many rules here.  But Top-notch music and the famous Spicy Buttery Shrimp is a slam dunk date-night combo. Life is indeed a Cabaret.