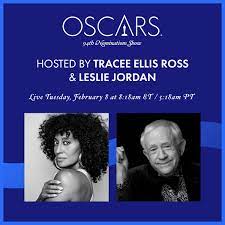 This morning, the nominees for the 94th Annual Academy Awards were announced. GLAAD responded to the nominations with a statement from GLAAD President & CEO Sarah Kate Ellis:

“This year’s Oscar nominations for performances from queer actors including Ariana DeBose and Kristen Stewart, as well for powerful LGBTQ stories in films like West Side Story, Flee, and The Mitchells vs. The Machines, are clear reminders of the opportunities that exist with audiences and critics when Hollywood invests in queer talent and tells diverse stories in bold and original ways,” said GLAAD President & CEO Sarah Kate Ellis. “With several worthy LGBTQ stories, actors, and creators absent from this year’s list, the industry and Academy should prioritize investing in and recognizing creators and stories from LGBTQ and other marginalized communities that audiences both crave and connect with.”

Nominated films including West Side Story, Flee, and The Mitchells vs. the Machines were also nominees for the 33rd Annual GLAAD Media Awards.

For a full round-up of the LGBTQ-inclusive nominations for the 94th Oscars, click here or see below.

Some standout and now Academy-Award nominated performances from queer actors include Ariana DeBose in the Supporting Actress category for her portrayal of Anita in West Side Story. A win on awards night could mark history, as DeBose would become the first queer woman of color to win an Academy Award.

Queer actor Kristen Stewart earned the nomination for Best Actress in a Leading Role for her portrayal of Princess Diana in Spencer.

An outstanding LGBTQ story nominated for Best Documentary, Best Animated Feature and Best International Feature Film is GLAAD Media Award-nominated film Flee, directed by Jonas Poher Rasmussen, an animated docudrama about the filmmaker’s queer best friend Amin who fled Afghanistan and reflects on his life before his wedding day. It also picked up a nomination for Best Original Score.

Also in Best Animated feature category is GLAAD Media Award=nominee The Mitchells Vs. The Machines, which stars out actor Abbi Jacobson as lead queer character Katie, an aspiring filmmaker who gets caught up in the fight to save the world with her family.

Steven Spielberg’s GLAAD Media Award-nominated West Side Story was nominated for Best Picture. While a possible nod to Pedro Almodóvar’s Parallel Mothers seemed possible, the film was ultimately snubbed in both the Best Picture category and Best International Feature.

Many had hoped to see other queer actors and actresses lining the roster, including Lady Gaga, Tessa Thompson, Abbi Jacobson, and Colman Domingo who did not receive nominations for their respective performances in House of Gucci, Passing, The Mitchells vs. The Machines, and Zola.

While there was no dearth of queer talent and storytelling in Hollywood eligible for nomination this year, queer directors, screenwriters and performers are few and far between when it comes to the 94th Annual Academy Award nominees – and many of the queer stories being highlighted are rarely directed by, or starring, queer people. This year marks an improvement in LGBTQ representation among Oscar nominees compared to last, but there’s certainly room for improvement.