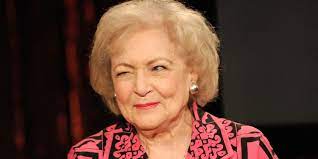 GLAAD is responding to the death of actress Betty White, who passed away at the age of 99.

Below is a statement from Anthony Allen Ramos, GLAAD’s Head of Talent:

“Betty White was an icon in the entertainment industry and a true ‘friend’ to the LGBTQ community. Her character Rose on The Golden Girls was instrumental in drawing mainstream attention to LGBTQ issues on television, namely an episode that raised awareness about HIV in 1990. Throughout the rest of her career, White used her platform to advocate for many issues affecting the LGBTQ community, including marriage equality and supporting at-risk queer youth.

White was a frequent guest at the GLAAD Media Awards, and one of our fondest memories of her was when she spoke out in support of marriage equality at the 24th Annual GLAAD Media Awards in 2013, stating: ‘I just want to say to all the judgemental people out there: if two people in love want to get married, let ’em get married!’”

Below are links to Betty White’s appearances at the GLAAD Media Awards: