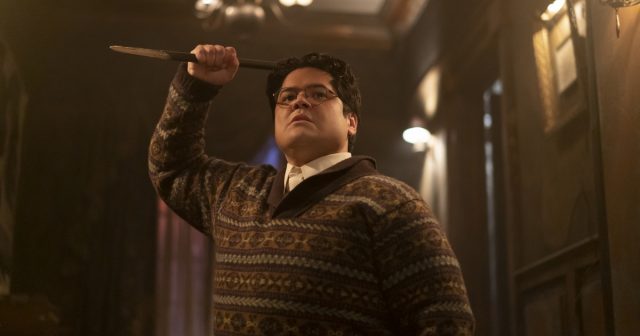 GLAAD’s Head of Talent, Anthony Allen Ramos talks with queer actor Harvey Guillén about his new horror/comedy whodunit film “Werewolves Within” from IFC Films which will be in theaters on June 25, 2021 and on Digital Rental & VOD on July 2, 2021.  Guillén talks about getting to hand-pick actor Cheyenne Jackson to play his husband in the project and what it means to him to be getting to redefine what a queer relationship looks like on film.  He also gives a preview of what is to come for season 3 of his beloved series “What We Do In The Shadows” which returns September 2 on FX.  The actor also talks about early discouraging words he heard when it came to wanting to be an actor but not looking like the “traditional leading man” type.  As we celebrate Pride month, he also talks about what Pride means to him.

Harvey Guillén on getting to pick Cheyenne Jackson to play his husband in the film.

“It was a dream come true! Obviously I am a musical theatre fan and I have such respect for Cheyenne’s talent and growing up in musical theatre I knew his work…and after meeting him, he was the nicest guy, the chemistry was perfect…he is lovely and I think we really meshed well together.”

Harvey Guillén on changing the idea of what a queer couple looks like onscreen:

“The idea that Cheyenne and I get to play a couple that traditionally by visual standards isn’t what you see as a gay couple on TV and film…you always see that six foot two, adonis, that idea that is only what exists of a pairing of two men..so it was really nice and refreshing.  Couples like this exist everywhere, but you don’t get to see them often on the screen because for some reason they think that is not believable.”

Harvey Guillén on the upcoming season of “What We Do In The Shadows:”

“We have amazing new storylines and characters coming.  We have Sirens coming this season, you heard it here first!  We also have celebrations of 100-year-old birthdays.  We have ex-girlfriends which my character is not too excited about, so there is a lot of stuff happening!

Harvey Guillén on early rejections in the business who said he would never make it:

“It was very discouraging very early on in my career where you are being told by professors and peers that ‘this is the normal, this is where it has always been’ but I think we are at a breaking point now, there is this pivot happening…we are revamping the way things are done.  I could have been discouraged early on in my career and not have been an actor but success and doing what I love was the only option and failure was not.”