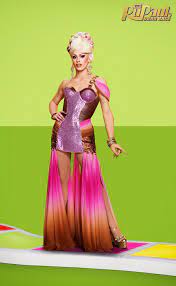 RuPaul’s Drag Race stars Bosco, Kerri Colby, Lady Camden, June Jambalaya Deja Skye and Jasmine Kennedie sat down to chat with GLAAD’s Anthony Allen Ramos at the LGBT Center Los Angeles about the show’s 11 Emmy nominations and why the stories told are so important and impactful, especially when it comes to trans inclusion and representation in the series.

Season 14 of RuPaul’s Drag Race was bubbling over with charisma, uniqueness, nerve, and talent – but would you expect anything less. The VH1 drag queen reality competition has become an institution at this point with various iterations of Drag Race around the world, an All Stars season of all winners that slayed and a brand new season of Secret Celebrity Drag Race that recently debuted.

On top of that, the tentpole Drag Race franchise that started on Logo and kicked the door down when it started airing on VH1 has snatched 24 Emmys and a total of 56 nominations including this year’s 11 nods. And let’s not forget that the behind-the-scenes aftershow Untucked has been nominated 3 times and has snatched one trophy.

Drag Race has made history with TV ratings, breaking ground for queer representation and RuPaul made history last year when the icon scored his 11th win with season 13 and became the most-awarded Black artist in Emmys history.

In addition, season 14 was the most trans-inclusive cast in the history of the franchise. Queen Kerri Colby entered the season as a trans contestant and during the run of the show and after queens Jasmine Kennedie, Bosco, Kornbread and the season’s winner Willow Pill came out as trans.

One watershed moment was during Untucked when Jasmine Kennedie came out as trans. GLAAD’s Anthony Allen Ramos chatted the queens during the mural unveiling event about this groundbreaking season and how it has impacted their lives.

“It definitely was a rollercoaster of emotions, as you can tell,” Jasmine told Ramos in the interview. “I think up until that point, I really hadn’t been honest with the group as well as myself.”

She continued, “ I think in that moment with the DeJa sparking the conversation and kind of and seeing Bosco open up about it a little bit more kind of gave me the comfortability to say what I was feeling and I think it was a great, bonding and experience that I don’t think I would have done it with anybody else.”

During the episode of Untucked, Kerri was a huge supporter when Jasmine came out.

“It was very full circle because I always have seen a lot of myself in Jasmine,” said Kerri. “She’s my little daughter and even on the show as we were starting, she was one of the younger contestants coming in [with] so much energy, so much life and kind of finding her ropes and when that moment happened…it was just so amazing to be able to be that person that I always wish I had and kind of paying it forward and it was just so genuine, so magical, so much so much fate.

Bosco also opened up about her journey on the show. “It was so incredible,” she said. “We filmed the show kind of at the tail end of the lockdown. So a lot of us had sat with ourselves and our thoughts for the past year and a half and like a lot of us [said], ‘We’re probably going to be moving the meter over and then to be like blasted with so much queerness all at once after not seeing anybody for so long – I just felt energized and focused and I’m like, ‘okay, I know what I want, I know what I want and I know how to get it.’”

She added, “I’m seeing my friends going out and getting what they want…, seeing yourself in somebody else allows you to see the possibilities that are there for yourself.”

For DeJa Skye, her experience on the show was just as incredible. She remembers the first walk through with RuPaul when he said “I saw your tape, I knew I had to have you here.”

For Lady Camden, who was the runner-up of season 14, Drag Race was an opportunity to not only showcase your talents, but also test your skills and your character

“I think it tests your like spirit and your ability to persevere through times where you feel like you’re being challenged at things that you’re just not as strong at,” Lady Camden pointed out. “Everyone’s really strong at something and less strong in other things…I think that it tests your soul, intellect, your taste – everything.

For 14 seasons, Drag Race will continue to move on as VH1 recently greenlit season 15 and Untucked alongside it. The upcoming season will also include the 200th episode because the fans keep coming back for more. June Jambalaya points out that the show takes real people with a passion sharing their experiences to audiences that may not have seen anything like it before. The show is a touchstone of representation of queer people that exists in many peoples’ lives. “I think that [Drag Race] is transcending everywhere – like you really are seeing Rupaul change real people’s lives,” explains June.