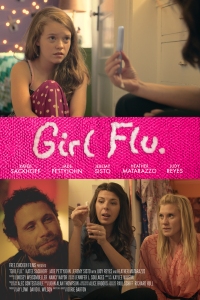 Bird (Jade Pettyjohn) a 12-year, old has enough on her shoulders.  She’s essentially holding her tiny family together.  Her mother, Jenny (Katee Sackoff), is an overgrown adolescent who flits about smoking weed and entertaining her significantly more mature boyfriend, Arlo (Jeremy Sisto).  So it’s really up to Bird to be the adult in the dynamic.  And until she starts her period, which proves to really rock that dynamic, it’s a piece of cake to keep it all together.

Girl Flu, a mini-gem of a film that explores the dysfunctional dynamic between a stunted single mother and her overly mature daughter, hits the nail on the head.  A 6th grader starting her period in California isn’t an earthshaking occurrence on its own.  But writer-director Dorie Barton unearths the nuances and cataclysmic happenings that make life come to a grinding halt over it.

Jenny and Bird simply can’t move forward until its implications are dealt with.  Essentially, the message seems to be that Bird’s period is a screaming ironic sign that Jenny needs to grow up and parent, and Bird needs to be allowed to be a child.  “I’m never having children.  I already have my mom,” Bird grumbles mid-movie.

The two must progress.  Their stagnation is forced to an end by Bird’s catastrophic biological incident.

They are supported in their heartwarmingly comic journey by Jenny’s patient boyfriend Arlo, played with measured tenderness and bewilderment by Jeremy Sisto.  Sisto has previously appeared in female-centric films including Thirteen, Clueless, and Waitress.  He doesn’t disappoint here, either, ultimately becoming an adhesive that binds a fractured mother-daughter relationship.  Arlo provides stability where Jenny simply can’t.  It’s a complicated and realistic relationship.  Perhaps she’s immature and unready to really raise a daughter.  Arlo loves her and her daughter in spite of her glaring flaws, and is up to the challenge of guiding her in the right direction.

Deeply, director Barton seems to be digging at something society doesn’t seem to want to address.  Ever.  Jenny’s confusion towards motherhood.  She loves her daughter more than anything; but she winces at it constantly.  Bird may be experiencing what is the equivalent, or maybe even the precursor. A severe aversion to adulthood.  When Bird starts her period, she promptly takes matters into her own hands, marching down to Planned Parenthood and announcing that she needs to have her tubes tied.

This, she believes, will stop both her period and her ability to become pregnant.  She wants neither adulthood nor children.

Lucky for Bird, though, she has the classic distraction of a sweet boy (Diego Josef) who appears from time to time to remind her of why it’s not all bad to grow up.  Unlucky for Bird, she’s being bullied at school.

As the two spiral toward a significantly painful denouement, the two both pull dramatic stunts designed to get each other’s attention.  And it works.  Bird and Jenny can’t ignore their affection for each other.  For all Jenny’s confusion, she’s the mother meant for Bird.  It takes 90 minutes of struggling for them to come to that conclusion.

Girl Flu is a nice little concoction on what society has deemed an unfit topic.  Barton makes it downright amusing with a scene starring Jenny’s friend Lilli (Heather Matarazzo) in which the two tackle the period problem head-on with an in-bathroom show on feminine hygiene.   Bird appears to relax visibly.  But, of course, it’s a much bigger problem.  As she notes: a woman will spend a full quarter of her life bleeding.  It’s a thought that seems to linger in her head like a half full jug; Jenny’s expression always seems the same.  Half full with the unwanted responsibility and worry of parenthood, and the bitter sweetness of knowing she wouldn’t trade it now that she has it.

Girl Flu is yet another gem of a female-centric film—one that mulls entirely the questions of women and girls, always being sensitive and kindhearted, without ever being lowbrow.  There aren’t enough of those.