Hollywood, CA (The Hollywood Times) 8/28/18 – Andrea Meyerson views the world a certain way; and it shows through in her films, and in her public demeanor.  She seems to understand that people need to be seen for who they are, and the message is a driving force in her screen narratives.

The spirited filmmaker, known for her interminable energy, made her way around the crowd at a pre-screening wine and cheese reception, making sure each guest knew how thrilled she was to have them there–that they were, indeed, seen.

Meyerson likely wasn’t prepared for the sold-out crowd, or the healthy waiting list that gathered at the Los Angeles LGBT Center, hoping an extra seat would open up.  In the end, of course everyone made it into the theater; inclusion was high on the priority list.

The first film screened, a 14-minute comedic gem entitled “One Way Street,” explores the notion of what happens when desire drives you in the wrong direction.  Three characters all butt heads while attempting to get each other’s attention and fulfill their own fantasies, ignoring signals along the way.  Jesse Archer, Kate Havness, Renee Santos, Torrance Hill, Lauren Hamilton, and Julie Elizabeth Shaw star, with a cameo appearance by THT Senior Editor Valerie Milano. 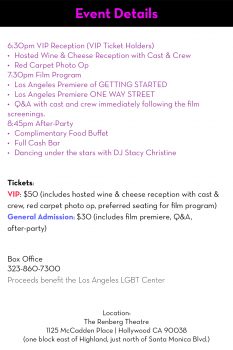 The cast were led by Meyerson to exactly the kind of performance you’d expect.  Confused hilarity is the result of impeccable timing and a perfectly choreographed bedroom scene.  Meyerson says she “loosely” based the short on an experience in her own youth.  Parallel to the film’s central character, she was a bartender.

“When I came out, I was 21, and I really didn’t understand boundaries,” said Meyerson during the post-show panel.  “I just knew that I loved women so much!  And so it is loosely based on something that I created when I was bartending.” “One Way Street” was originally released in March 2017. 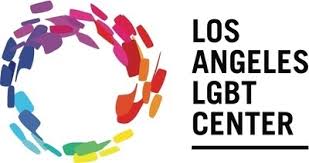 “Getting Started,” starring Dreya Weber and Susan Solman, with Dalilah Ali Rajah, Jennifer Kriz, Joey Rich, Suzanne Westenhoefer, Gloria Bigelow, and SweetBaby J’ai, was originally released in April.  The backstory behind the truly emotional, and often funny, 23-minute film, is beyond inspirational.  It’s based on star Solman’s real-life experiences and life-altering challenges; and how she found love again.  Solman is a highly respected professor at Florida International University, and now a professional actor.

In portraying what is an intensely personal story, she plays opposite the Amazonian Dreya Weber; and the onscreen chemistry is remarkable.  The two play Tori and Joy, two highly successful women who meet online and find that their immediate love and mutual attraction is more than enough to overcome anything that might challenge their progress.

“We all have limitations,” says Tori as she explains to her friend at a party why she will continue to pursue the relationship.  It’s a passionate statement piece by Meyerson, and given the gravity of Solman’s story, it’s no surprise the film was an Audience Winner for Best Short, Film OUTShine Film Festival, “Best of Fest,” and Audience Choice at Cinema Systers Film Festival, and Best Comedy Short Film at Out Here Now Film Festival.

After screenings and panels, the sold-out crowd spilled out into the courtyard at the Village at Ed Gould Plaza.  Dinner was served, dancing commenced late into the night, and red carpet photos were snapped with Meyerson and the cast.

Throughout the entire evening, Meyerson’s commitment to getting to know her supporters never waned.  On the last dance of the night, she was still on the floor, hugging new friends and longtime supporters alike, and laughing with them.  And so one can only assume they’ll be there to cheer on her next endeavor, as well.