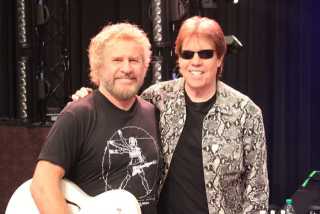 GEORGE THOROGOOD RECALLS A SURPRISE ENCOUNTER WITH ONE OF MUSIC’S MOST LEGENDARY PRODUCERS IN THIS FIRST-LOOK AT A NEW EPISODE OF ROCK & ROLL ROAD TRIP WITH SAMMY HAGAR, AIRING JUNE 16 AT 8PE

Blues Rock legend George Thorogood—the multiplatinum musician behind enduring hits such as “Bad To The Bone” and “I Drink Alone”—joins Sammy Hagar for an all-new episode of Rock & Roll Road Trip, airing Sunday, June 16 at 8pE/5pP.

In this exclusive first look, Thorogood recalls the events leading up to his rise to rock n’ roll superstardom. “I was on this tour that we did in 1981, the 50/50 Tour… tour stop number 54 happened to be playing at the SuperDome with the Neville Brothers and Rolling Stones,” Thorogood explains. “Now, the night before that, we played a place in Arkansas called The Library, seated 125 people… [The SuperDome] seated 80,000 people!” The band’s star was about to get a whole lot bigger thanks to “Bad To The Bone”—a song that would go on to become one of Thorogood’s signatures, but at the time, was only just beginning to take shape.

Though it had only ever been played during soundchecks, “Bad To The Bone” managed to capture the attention of one of music’s most celebrated producers. Thorogood continues, “This man comes up to me and he introduces himself. He says, ‘Are you writing any songs?’… I said, ‘Actually, I am. I’m trying to put some stuff together.’ And he said, ‘Well, if they’re anything like ‘Bone’, you’re gonna do all right’… I said, ‘How do you know about that song?’ Because nobody knew it. And he goes, ‘George, it’s my job to know it. By the way, I’m David Geffen.’ “ Check it out here.