“When we get success, we are going to use it to make a difference.”–George Clooney to Laura Dern

West Hollywood, CA (The Hollywood Times) 6/11/18 – At the age of 57 George Clooney received yet another life achievement award on the evening of Thursday, June 6th, 2018 at a black tie AFI gala held at the Dolby Theater in Hollywood.  Former President Barack Obama spoke in praise of Clooney’s many accomplishments both on and off screen in pre-recorded remarks screened at the gala.

Still remembered for his long-running role as Dr. Doug Ross on the medical television drama E.R. (1994-99), Clooney has also emerged as a social activist and humanitarian along with wife Amal, a noted human rights lawyer.  Both Clooney 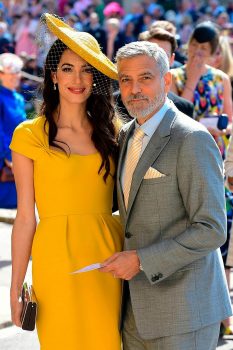 s were spotted at the wedding of Prince Harry and American actress Meghan Markle on May 19th.

Clooney’s wife and parents were present at the star-studded event, making it very much a family affair.  Father Nick Clooney introduced son George from the dais.  Clooney’s twin son and daughter, Alex and Ella, had just had their first birthday the day before the awards ceremony.

2017 AFI award recipient Diane Keaton was followed on stage by television host Jimmy Kimmel and actors Laura Dern, Jennifer Aniston, Courteney Cox, Bill Murray, Miley Cyrus, Richard Kind, Anna Kendrick, Cate Blanchett, and Shirley MacLaine.  Julia Roberts presented Clooney’s AFI award on tape and clips from many of Clooney’s performances were shown, including one from his Oscar-winning role in SYRIANA(2005) as a CIA operative who decides to conduct his own war on terror.  Clooney also executive produced this film that focuses upon the geopolitical influence of the oil industry. 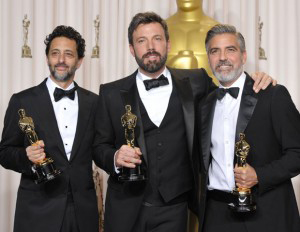 George Clooney received his second Oscar for producing the political thriller ARGO (2013).  He is the only person ever to have been nominated for Oscars in six different categories (Best Picture, Best Director, Best Actor, Best Supporting Actor, Best Screenplay, and Best Adapted Screenplay).

Since 2008 Clooney has served as one of the United Nations Messengers for Peace and has created documentaries such as SAND AND SORROW to raise awareness of international crises.  Like fellow A-list actor Angelina Jolie, he is a member of the Council on Foreign Relations (CFR).  Most recently Clooney supported the Presidential campaigns of Democratic candidates Barack Obama and Hillary Clinton with LA-based celebrity fundraisers.

Many in the audience were moved by Nick and Amal Clooney’s loving remarks about George both as actor and person.  “At age 84 I would like to grow up to be like my son,” said Nick Clooney.

The 46th Annual AFI Life Achievement Awards honoring George Clooney were taped for broadcast.  The show will air on TNT on Thursday, June 21st, and later on sister network TCM.