Following up A Weekend In London, legendary performer George Saban will take the stage of the Saban Theatre in Beverly Hills on September 23, 2021

Los Angeles, CA (The Hollywood Times) 9/13/21 – When George Benson performs again at the Saban Theatre in Beverly Hills on September 23, 2021, there is no doubt that he will dazzle the audience with style and charisma. As a legendary figure in the history of rhythm & blues, Benson has won numerous Grammy Awards. Brought to you by Where Music Meets The Soul, tickets to this fantastic show are still available.

From receiving the Grammy for Record of the Year for The Masquerade in 1976 to winning the Grammy for Best Traditional R&B Vocal Performance with Al Jarreau for God Bless the Child in 2007, George Benson has been a hit-making machine for over forty-five years. Moreover, he is known to be one of the most dynamic yet soothing live performers. Indeed, his sly, seductive rhythm and blues performances have led to an impeccable reputation as one of music’s most engaging stage performers.

George Benson returns to his roots as a live performer on his latest album, Weekend in London, which is available to purchase from Provogue Records at the Mascot Label Group. On the album, George Benson creates a lovely wave of soul grooves and vibrant jazz leads that he plans to bring to the Saban Theatre in Beverly Hills. Indeed, Benson’s soft vocals and improvised runs allow this aging legend to remain current in the 21st century. 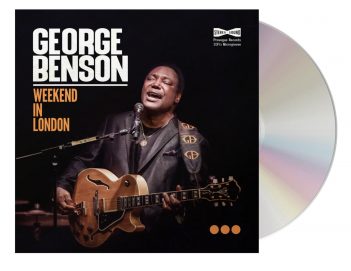 In an interview with Guitar.com, George Benson describes how recording at Ronnie Scott’s Jazz Club in London brought the band together, helping them soar to new levels of refinement. Benson explains with passion, “It put us so very close together. It reminded us of our old rehearsals when we used to rehearse in little tiny places where we were all on top of one another. But that was good because we were able to check out exactly what each other was doing, and not guess at it. And that wasn’t just for effect. It was really about musicianship. I insist that my band be musical. That’s the first thing I want to hear from them, and then we go from there.”

As a touring musician, George Benson finds the clearest expression of his soul on stage. When he plays live, the music takes on new dimensions and opens new doors. Without question, George Benson’s upcoming show at the Saban Theatre in Beverly Hills should not be missed. It is a real opportunity to see one of the legends of rhythm & blues experience a new renaissance of style and refinement, showing that age is not an issue when artistry shines.