“I don’t really care what the budget is. Hopefully you have enough to tell the story you’re trying to tell.”  Richard Linklater

Beverly Hills, CA (The Hollywood Times) 9/2/17 – The latest installment of American Masters was Friday night’s profile on Richard Linklater; a  writer/director who puts the “I” in independent.  Early on, Linklater decided that the blue on red art mecca of Austin Tx., was a far more friendly environment for his filmmaking vision than the industry towns of Hollywood and New York. So while other artists made a bee line to the coasts to play the game, Linklater stayed in his sandbox of many colors and quietly started cranking out Zeitgeisty masterpieces like 1993’s Slackers. Think Woody Allen meets Cameron Crowe…with an edge.

Linklater somehow made a name for himself as an eclectic, uncompromising visionary by conceiving films that were impossible to make, market or ignore. He made sequels no one was asking for (Before Sunset), films Hollywood didn’t want (Dazed and Confused) and projects that were impossible to imagine and market, (Boyhood); all of this buttressed by the occasional summer blockbuster (School of Rock).  Guest commentary by Matthew McConaughey, Ethan Hawke and Jack Black paint Linklater as a big kid with quirky ideas and a thirst for artistic collaboration that earned him a reputation as an actor’s best friend. 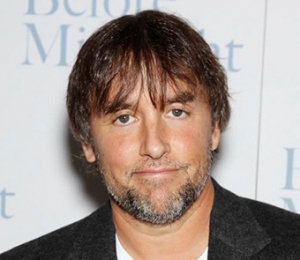 The production team of Karen Bernstein and Louis Black keep it simple and stay out of the way, letting the artist talk while leafing through his old school note book loaded with his obsessive scribblings. The 90 minute documentary follows a straight chronological time line (more or less) that intersperse clips from his most famous films with home movies, interviews with colleagues and family, as well as clips from the iconic Siskel and Ebert television program – a program that both panned and praised his work.

Mega-hit School of Rock notwithstanding, Linklater has skated around the periphery of The Biz making films that are a step ahead of the stodgy groupthink of the major studios. Dazed and Confused should have been a summer comedy smash; however, Linklater’s desire to accurately portray 70’s teens as cultural refugees who liked to smoke dope, drink beer and ruminate on the uncertain life that lay before them, was way too much for the Hollywood movie machine to digest (or promote).  Dazed and Confused would eventually find its audience through video and word of mouth;  as would Slackers, a Gen-X yakathon that opened to decidedly mixed and uncomprehending reviews but would later be lionized as the defining movie of its generation.

Linklater just missed grabbing the brass ring of Hollywood insider acceptance when his monumental Boyhood missed out on a best director Oscar after nabbing a Golden Globes, BAFTA and The Critic’s Choice Award for best director.  The film covered the life of a real boy, coming of age in real time, shot in bits and pieces over the course of twelve years. Linklater deserved that Oscar for persistence and imagination alone.

American Masters is a consistent documentary series that seems to do its best work when profiling Americans that have left a huge cultural footprint through their work and innovation, but who remain immune to vicissitudes of celebrity culture. Fully expect to see a bouncy octogenarian Linklater accepting his Lifetime Achievement Oscar in a couple of decades with the hope it will help him get his next film made.

If you missed the original September 1st airing of this program on Friday night, it is currently available for viewing on the PBS App.

THT, the TCA and others recently had the opportunity to speak with Richard Linklater about his life and times and American Masters “Richard Linklater, Dream is Destiny”. It was also his birthday.

Linklater talked about his decision to base his filmmaking activities in Austin Texas and why he has currently shifted his base of operations to Pittsburgh,

RICHARD LINKLATER: “I have to disagree when you said it’s a struggle to film. No. Austin, I found very pleasant, and all of Texas I found very easy to make films in. Some cities are harder than others. Try making a film in Paris. They really don’t I mean, it’s beautiful, but they don’t really want to help you much there. Even your own lab processing your film doesn’t care about you.”

But I kid a little bit. I had a great experience there a long time ago. Texas, it’s kind of hard times. There’s this competition state to state with the incentives and everything, and Texas has kind of chosen to dial back pretty significantly. I think our government has shifted, so that sort of speaks for itself. You can read Lawrence Wright’s recent New Yorker article about the state of Texas politics that can say so much about how it’s shifted. We’re just, kind of, in the undertow of that, so I currently find myself in Pittsburgh, which is a wonderful city, and I made a film here last year that’s opening this fall called “Last Flag Flying,” and I’m currently here, and I’ll also be in Seattle and other places making it, but today I’m in Pittsburgh because that state is committed to this industry.”

Linklater talked about his reputation as an “actors director”.

RICHARD LINKLATER: “Yeah. I mean, you’re working with new actors every film, people you haven’t worked with, and I think yeah. They come in, and I hope to get them to settle into the process I’m offering them of spending time and really hashing out each scene and the story we’re trying to tell. I want to treat them as a participant because I want them to help me make the best movie I can and tell the story the best we can.

I don’t know. I have this intuitive process I’ve just always used naturally. I sort of trained as an actor early on. Not that I ever wanted to be an actor, but I wanted to dig into that process a little bit, so I’m not afraid of actors. I really love actors, and I want to pull out of them everything they might have to offer to this one part that I must think they’re going to be good in or you don’t cast them.

So it’s always a very rewarding experience. I’ve had a little resistance sometimes when people don’t really I guess it’s more veteran actors often who’ve had some bad experiences. A lot of it is trust. We all have to trust each other. You know, that’s what’s beautiful about the arts. You just jump in, and you trust the people around you, and you’re all in it together. So I try to foster that atmosphere. We’re all collaborating here.”

As a native Texan has some firm opinions about the film friendliness of his state and its trend in governance,

“It feels a little trivial to bring it to the arts when it’s things like healthcare and people’s lives are literally on the line. It’s estimated 800 to 3,000 people a year, our fellow Texans die because we haven’t gotten the Medicaid expansion. So it’s a choice the governor makes, but in a way you know, you can look at it they’re sort of murdering people. You can’t say exactly who. It’s an unhealthy environment. To me that’s much more important than are they funding films, but at the same time, the arts, it’s what a lot of us have dedicated our lives to and our souls, and our storytelling is very important. So that’s, of course, a big deal in my life.

So you just roll with it. You know, you’re kind of we’re all subject to these bigger trends, the waves blowing through our culture, national and local.”

QUESTION: Richard, well, you can’t see where I am. For you first, and then for those on stage who have observed you, we started talking about money, and people wonder will the top actors, will the top talent, will the top artists work with you? Are you surprised how many people come to you longing, even if they’re famous, even if they’ve made a fortune, longing for, I don’t know, a more artistic experience or an experience more like what they dreamt of when they wanted to be an actor or they wanted to be part of movies? Are you surprised how many people come to you, shall we use the word “big names,” and when they come, do they love it as much as they thought?

RICHARD LINKLATER: “I don’t really have that many what you describe as huge stars, I think by most people’s definition. They don’t really come to me that much. Often I’ve had trouble getting their attention. I send them a project and you don’t hear back or whatever. I think because our industry does is sort of obsessed with success and money, and if your films haven’t made a lot of money, you don’t really hit some people’s radar, which is kind of fine with me. The people who find me and I find, I figure we’re meant to.  I kind of like the organic process of like Cate Blanchett, for instance. We’ve known each other a few years, and we’ve kind of been circling each other, and it just sort of worked on this project.”

LOUIS BLACK: “Well, Rick has developed so many artists, so Matthew McConaughey. Ethan started working with Rick relatively early on. A lot of people started with Rick. But also, yes, I mean, Jack Black, one of the great experiences of his life was working with Rick.

RICHARD LINKLATER: “Yeah. I’m at the phase now “ravages of time” is more, yeah, an appropriate word. You’re starting to feel it in middle age. But, no, it’s kind of wonderful to I’m working on, I think, my 21st film right now. You look back and think, God, you’re so blessed. You know, those bonds you formed with the people you work with, cast and crew, they’re really special moments. Every day you’re making a movie, you look around and say, God, these were just ideas, words on a page. And here it is physically manifest. Here are these wonderful people. And if you have a decent budget, yeah, everybody’s getting they’re making a living at this. It’s really magical.

So I appreciate it even more the more I do it, the older I get. I think early on, you’re so passionate about it, you think it’s your birthright to get this, but I feel more fortunate, more grateful, probably, to get to do it when you’re doing it.”

Wellington Paranormal: A Return to CW