Beverly Hills, CA (The Hollywood Times) 8/27/18 – What do a wooden puzzle box, a plaster death mask, an antique camera, and a vintage player piano have in common?  They are all key clues in the four new GARAGE SALE MYSTERY shows that premiered on Hallmark Movies & Mysteries during the month of August on Sunday nights at 6 p.m. 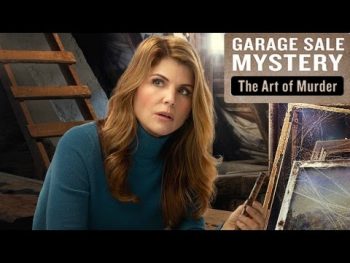 This family-friendly American-Canadian series that first launched in 2013 takes us into the rarefied world of estate liquidations and art auctions as well as the rough and tumble of garage sales and storage space sellouts.  Series lead Jennifer Shannon (Lori Loughlin from FULL HOUSE and FULLER HOUSE) has a 24/7 job as the owner of an antiques store called Rags to Riches that keeps her busy hunting down one of a kind items.  Some of her best finds turn out to have ties to brutal murders.

Jenn’s eagle eye and active mind, honed during years of running Rags to Riches, turn out to be major assets for crime spotting and crime solving.  Her amateur sleuthing causes her to form somewhat uneasy alliances with Detective Lynwood (Canadian actor Kevin O’Grady) and Dr. Tramell (Canadian actor Jay Brazeau), who appreciate her skills but remain concerned for her safety. 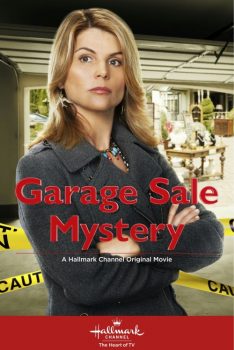 This month the four GARAGE SALE MYSTERIES were titled “The Pandora’s Box Murders,” “The Mask Murder,” “Picture a Murder,” and “Murder in D Minor.”  This last and probably best show ended with champagne for all after a trove of priceless artworks smuggled out of Europe after World War II were recovered by Jenn and her intrepid team.

Of course “one mystery per week” plots can seem contrived, but the GARAGE SALE MYSTERIES do manage to keep viewers guessing!  Their two-hour format allows for more realistically-paced plot and character development.  Jenn is a consummate juggler whom Lori Loughlin still manages to keep real and relatable.

Will this reporter and her lifelong partner in crime make the GARAGE SALE MYSTERIES an annual summer indulgence?  Hmmm. . .did Haydn wear a wig?