Hollywood, CA (The Hollywood Times) 12/5/17 – Wednesday night at The Egyptian, Mel Gibson snuck into the back just before a certain gangster movie began.  It may have been because his son, Milo Gibson, plays legendary mobster Al Capone in it.  Mel graciously took a literal back seat, not appearing on the red carpet or anywhere near it, and leaving rapidly before the press or anyone else could get a real look at him.  His son may be Hollywood royalty, but Mel wasn’t going to spoil the organic response to the film or draw attention away from Milo.

Cast members talked to THT on the red carpet about tackling such iconic, and brutal, historical roles.  For Pare, it wasn’t a stretch.  “It’s kinda historical, and I play cops all the time, I mean I’ve been in every branch of law enforcement and military there is,” he said.

“I did a lot of research on Bugs Moran, and it was a really hard time back then,” Peter Facinelli told THT.  “The crime life was a way out for these guys.  When you had a name and a reputation, that meant something back then.”  Facinelli said doing a Gangster movie was a particular treat.  “For me, I had a blast,” he said.  “Something about putting on those suits, and being around those cars, and living in that time period for a little while, that’s a lot of fun.”

Facinelli also commented on what it was like to recreate historical scenes.  “What was really interesting was doing scenes that I knew actually happened, so in my mind, I’m like, ‘wow, in some parallel universe this is actually happening right now!  We’re re-enacting it.’”

He said that working with Milo Gibson was a treat as well.  The two had previously worked together on a project Facinelli directed.  “It was just a blast being able to work with (director) Tim and Milo.  I had just directed my first feature and Milo was the lead in my movie.  So I had just spent a couple months directing him, and this movie came along; I ended up working with him again.”

The screening was well received by its capacity audience at the historic Egyptian.  Director Timothy Woodward Jr. used the bulk of his limited budget on recognizable faces, with Gibson dominating, his brooding demeanor and steely eyes often heavily reminiscent of his father.  There’s emerging talent, if not decades of experience yet there.  Cinematography relies on moody shots, and there are plenty of those.

A packed party at Liaison Restaurant and Lounge followed the screening and red carpet.  Filmmakers and cast enjoyed relaxing after their achievement, guests networked, and some even danced on the open floor—Gangster style.

The Valentine’s Day massacre is apparently a story Americans can’t get enough of, and Woodward and co. have done a nice job of bringing it back into the forefront—with, of course, a three-round Gangster party in Hollywood. 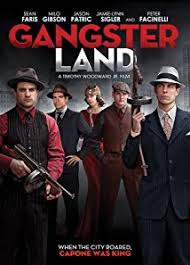 The Macaluso Sisters: Emma Dante’s Study of Time and Memory