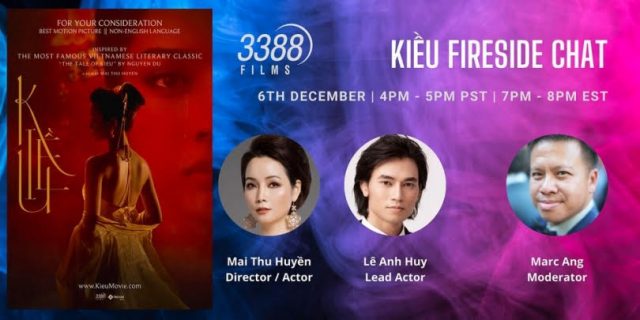 Los Angeles, CA (The Hollywood Times) 12/6/21 – I have the honor of interviewing the director and actors of Kiều tonight when I’ll be asking in-depth questions about the filming of the movie, cinematography, and deep analysis on the endearing characters of the movie from the powerful women leads and the male love interest and his martial arts moves. 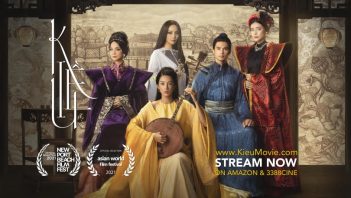 Tune into the special Fireside Chat with the director and lead actor of Kiều at 4 PM PST/7 PM EST on Monday, December 6, 2021.

FYC for the 2022 Golden Globes, Kiều is directed by female director Mai Thu Huyền, who also stars in one of the film’s lead roles.  Kiều held its U.S. premiere as the selected Vietnamese Spotlight film at the 2021 Newport Beach Film Festival, the second only Vietnamese Spotlight film in the festival’s 22-year history. Available now on Amazon Prime, Kiều was also awarded ‘The Most Outstanding Film of the Year’ at the ‘Once Upon Vietnam’ Awards, an event sanctioned by the Asian World Film Festival.

Inspired by the most famous Vietnamese literary classic of all time, The Tale of Kiều by poet Nguyễn Du, this female-driven film is a story of a filial daughter who agrees to wed a stranger to save her falsely imprisoned father and brother.

Unbeknownst to her, this marriage is a deceitful façade to force her into sex labor at a brothel where her talent and beauty spawn cruel jealousy, unwanted obsession, and lustful admiration.

Pushed into an emotionally wicked and twisted journey, she must decide whether to fully accept or defiantly challenge her Fate in life. With lush cinematic work portraying achingly romantic landscapes of Vietnam, Kiều is a profound juxtaposition of the suffocating conditions of women in a feudal regime and the beautiful empowerment of human liberation.

Mai Thu Huyền Vietnamese-born Mai Thu Huyền is an award-winning director, producer, actress, model, TV host, and entrepreneur. The 2021 feature film Kiều marks her directorial debut. Previously, she produced and starred in the feature films Paradise in Heart and American Dream. She was awarded the Rising Star and Best Actress Award by the HCM City Film Association for her role as “Thanh Trúc” in Candles at Night. She is the Founder & CEO of Tincom Media.

Lê Anh Huy is a Vietnamese-American actor and singer who stars in the lead male role of Thúc Sinh in Kiều. He is the winner of the Mr. America International Award 2013 and appeared in several independent US-produced films before making his Vietnam feature debut in Kiều.

Marc Ang (Moderator) is the President of the Chinese American Citizens Alliance in Orange County and founder of Asian Industry B2B. He is a community organizer in Southern California who has a heart for promoting Asian films and getting Asian stories heard in the mainstream. Marc is also a freelance journalist who is featured regularly on the Washington Examiner, Newsweek, City Watch LA, Hollywood Times, Asian Journal, and many more publications. He has made front-page news on Los Angeles Times and New York Times for his activism and leadership in the Asian community. His book Minority Retort will be released in early 2022.

3388 Films is a production, post-production, and distribution company with proven experience in more than 20 different markets & languages and specialized in Asian and Southeast Asian media and film content. We are champions of underrepresented and underserved independent and international content creators. Our mission is to create with intention and to connect diverse media & film content to global audiences. Recent US distribution projects include Bố Già (Dad, I’m Sorry), the first Vietnam film to cross $1M at the U.S. box office, and the epic action fantasy Tam Cam: The Untold Story, directed by Veronica Ngo, whose credits include roles in Star Wars: The Last Jedi and Bright with Will Smith.