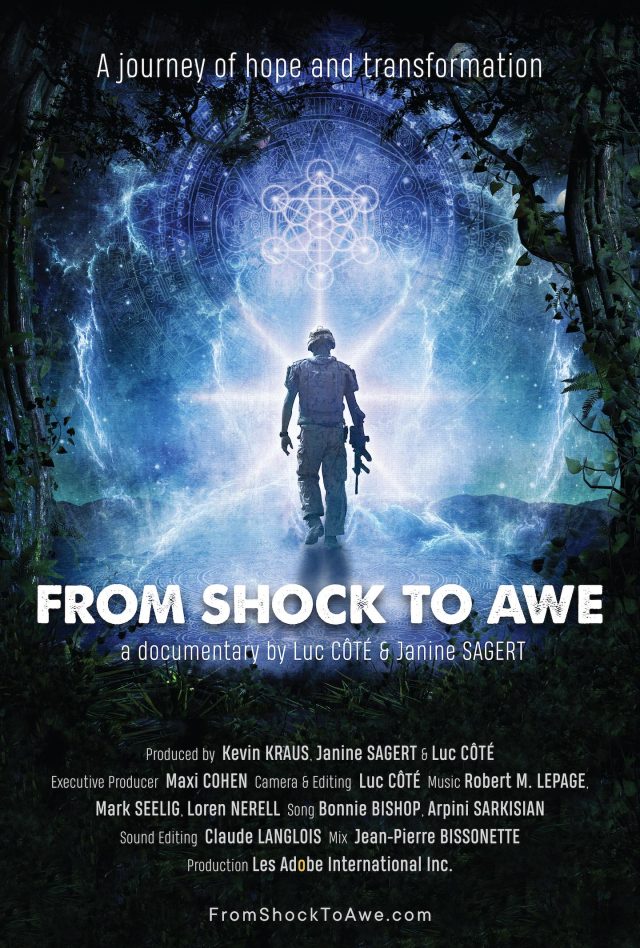 This film documents the lives of two veterans, Matt Kahl and Mike Cooley both suffering from PTSD and how plant medicines saved their lives.

A Journey of Hope and Transformation.

“Veterans are the light at the tip of the candle, illuminating the way for the whole nation. If veterans can achieve awareness, transformation, understanding and peace, they can share with the rest of society the realities of war and they can teach us how to make peace with ourselves and each other, so we never have to use violence to resolve conflicts again.”

“From Shock to Awe truly is a magnificent journey of two veterans that lived through the throes of war and had to deal with man-made prescription drugs that almost killed them. Then, with nothing left, they turned to plant-based medicine and their journey to a new life and healing began!”

From Shock to Awe asks ‘how do we heal our deepest wounds?’ An intimate and raw look at the transformational journey of two combat veterans suffering from severe trauma as they abandon pharmaceuticals to seek relief through the mind-expanding world of psychedelics. Recent scientific research coupled with a psychedelic renaissance reveals that these substances can be used to heal PTSD (Post-Traumatic Stress Disorder) for individuals and their families. Beyond the personal stories, From Shock to Awe also raises fundamental questions about war, the pharmaceutical industry, and the US legal system. 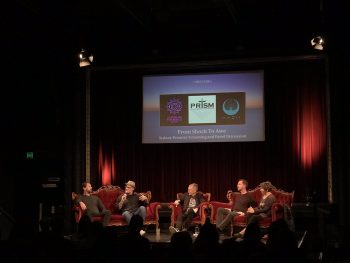 A campfire with men and women around and a Tibetan bowl being rung.  Incense being burned and medicine being consumed.  As one man drinks, memories of a war… another, explosions… Everyone is wished a safe and beautiful journey.

2.7 million Americans have served in Iraq and Afghanistan since 2001.

Approximately 20% of them have been diagnosed with Post-Traumatic Stress Disorder (PTSD). 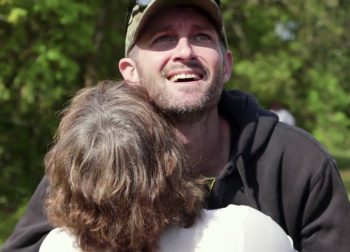 A wife and son says goodbye to their father. He’s going to class not war. UCCS is where’s he goes to class. It’s been difficult to focus on classes, and what he’s supposed to be learning, while he has everything else that he’s supposed to be learning, he just doesn’t have the heart in it, most times. As he gets closer to the school, he’s going to be dealing with close proximity of vehicles and immediately begins to “check IN”, looking at rooftops. He doesn’t like people coming up on his ass. It could be an ambush, a V-BID, it could be anything. Back in the states, he gets so anxiety ridden that he just get so pissed off. 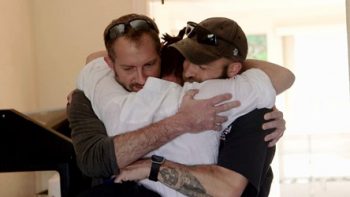 This is what he deals with on a daily basis.  He, like other veterans, spends their formidable years killing people and now, that life is gone. The anger got so much that his wife paid the price due to the atmosphere he was creating at home. Twice, she held a gun to her head, ready to end it. Ramped up on tons of psych meds, more and more and more, until she was on meth, cocaine, and she is a vet suffering too!

Matt Kahl tried to kill himself and wound up in the hospital. His young son and wife came to see him and his son said, “Daddy, why did you hurt yourself?”  Matt recalls, he couldn’t just tell him, “Daddy, wanted to kill himself because Daddy no longer wants to live.” What’s a kid supposed to do with that?  He’s not going to understand why. He thinks it’d be his fault and Matt lied to him and told him that “Daddy’s getting better”.  He shouldn’t have told him that, because 8 months later, he deployed again. He didn’t want to live and had to get medevac’d.  He was in the hospital again and Matt was 10 times worse.  He’s lost on how to get close to his son again.

War’s cruel and completely dehumanizing. You dehumanize the very people you go there to kill.  But it’s really hard when you’re working on children and trying desperately to save their lives and there’s nothing you can do. You finally convince your chain of command to medivac these children. Because they are not a priority, American soldiers are a priority.  Then Matt would come back the next day and bring them back in a body bag. You have to give their bodies back to their families.  Matt recounts, that it’s bad enough when an IED goes off by accident. But it’s even worse when you did it them, because it happens. Part of his job was collect “body parts.” A very small foot, a hand, and he rubbed it like it was a rabbits foot.  Then he threw it in the burn barrel with all the burning shit. What bothers him to this day, is that he doesn’t know whether it was a girls foot or a boys foot. He just said it was a boys foot.

He talked to his parents, once, then his son, he was 2, he babbled. He said goodbye for what he thought would be the last time. He buried part of soul in Afghanistan and he doesn’t think he’ll ever get it back. He’s trying to figure out how to deal with the person he is now. Today, his kids are his anchor. He doesn’t know what he’d do if he’d lost them. 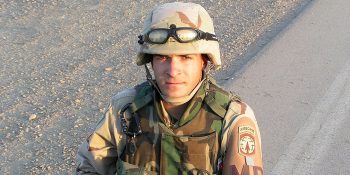 Mike recalls, while in bed with his wife, in their darkened bedroom.  She lit a cigarette lighter which freaked Mike out. He had fallen to his knees. He was back in Iraq. An explosion just went off.  His was thinking, “Listen for what comes next and react!”  The next thing he felt were arms around him. His wife’s arms.  Then “snap”, he was no longer in Iraq.  Sometimes, if these episodes are really bad, he has to say it out loud, “I’m not in Iraq! I’m here, ok, I’m here, I’m here!”  What his wife found that when she put her hands on his shoulders from the back, it feels like the weight of his ballistic vest.  “There’s someone behind me,” Mike thought.  “there’s someone that’s got my back,” and it reassures him that he’s “alright.”  He wouldn’t be there if it wasn’t for her.

Matt wasn’t alright when he got back. He isolated himself from his family. His wife heard a lot about PTSD, but didn’t understand it. She didn’t know how it was going to affect him.  She noticed him slowly detaching and completely, disappeared. It was like he died.  He was on Opioids.  He was on 90 prescriptions over 4 years @ 18 meds per day. They almost killed him.  He wants to be free of it. That’s why these men sought Ayahuasca and want to seek something other than hate and death. 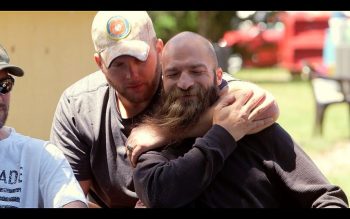 Ayahuasca is a sacred plant medicine traditionally used for healing and spiritual transformation.

Brain scans have shown that ayahuasca activates regions of the brain associated with vision, emotion and memory among others.

Personal accounts suggest that when used in a safe setting, it can facilitate ‘seeing’ personal trauma in a new light.

Matt, Mike and Brian LeCompte (Veterans Support Specialist) travel to Ayahuasca Church of Mother Earth in Orlando, FL for a weekend to participate in four ayahuasca ceremonies completely at their option. Two during the day and two at night.  This tea, combined with a vine and leaf, takes two-three days to make. It’s made in the jungles of South America.  It is not a drug and you don’t get high from it.

Matt, after taking the initial dose and booster, he was still fighting it and didn’t want to let out the hate and death. Then Chris came by with the Rape’ (pronounced: rappee), a snuff made from various Amazonian plants. It helps with sickness and blocked energy. The daytime is alone but not totally alone. No talking. It’s a way for the person to take in everything mother earth has to give.  Tibetan bowls again. Quiet. Laying down. Sitting up. Feeling the power of the earth.  All these men and women are under strict supervision and never alone.  It is a controlled session. Then, it’s over. They’re done and smiling, laughing, giggling, and grinning from ear to ear and they feel completely connected to everything with a profound sense of love for everyone and everything.

What they experienced is a divine light, love in everyone and everything.  It was incredibly compassionate.  Matt spit into the ground with the intention that he no longer wanted ‘it’ and he felt the sunlight come through his fingers and into his inner core. The one thing that they learned as a warrior is to KILL the enemy and that’s completely opposite of what the Chris Young teaches. They find now that all life is sacred. 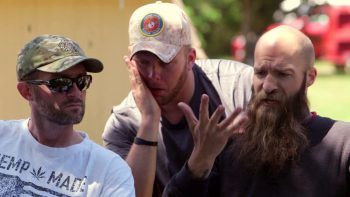 The journey continues for both men, five months later.

Mike no longer has triggers, doesn’t feel like he has to move over to the side of the road to lessen the damage.  He visits Matt and they feel wonderful. They have seen things differently. Mike’s wife has panic attacks and flashbacks. It’s time for her to go to the church.  Matt has to help his wife with her trauma just from him being fucked up.  She too, has a lot of her own pain. Now that Matt is healing but his wife needs to take ayahuasca or jump ship! LOL.  Matt was so excited that he came off too strong and pressured her. So, now, she needs to find her own path and is considering it.  Mike’s wife, Brooke, is open to thought of ayahuasca.  Brooke, however chose MDMA.  It’s been shown to create changes in the brain that allow difficult memories to be experienced without overwhelming fear and anxiety.

MDMA – Methyl​enedioxy​methamphetamine, commonly known as ecstasy or molly, is a psychoactive drug primarily used as a recreational drug. The desired effects include altered sensations, increased energy, empathy, and pleasure. When taken by mouth, effects begin in 30 to 45 minutes and last 3 to 6 hours.

MDMA and Ayahuasca are not a one-time fix all but they are tools.  We lose more brothers and sisters home vice combat because we don’t get the help we need when we use what works. They perceive us as criminals because it’s illegal. But Mike was taking 90 prescriptions for four years that almost killed him. But taking this illegal drug, saved his life.  I hope that our sons and daughters never have to fight. Mike now has a deep seeded need to continue service to God and country.

Ayahuasca is a plant medicine and it comes from the Amazon and Mike’s mission is to bring plant medicine to not only veterans but civilians with PTSD because it causes untold damage economically and socially. We Veterans fought those wars and caused the destruction and now, it’s our time to heal.  Mike’s going to run for elected office because it’s his duty to our country to let everyone know and help get more veterans to elected office.

If you’re a veteran, suffering from PTSD and want to experience what Mike, Matt and Aimee (Matt’s wife) experienced, then please, go to: https://www.ayahuascachurches.org

IMPORTANT! Are you on any: Antidepressants; MAOI Inhibitors; SSRI’s

What is Psychedelic Therapy?

Learn from the experts, and get to know the mind-expanding world of ayahuasca, cannabis, and MDMA. We interviewed some of the most experienced professionals working in this space and encourage you to explore the knowledge of these trailblazers.

Millions of Americans suffer from PTSD (Post-traumatic Stress Disorder), including hundreds of thousands of veterans. Yet standard drug and therapy treatments have low success rates. Some cases of PTSD are considered untreatable. However, researchers have seen dramatic results from therapy that uses certain psychedelics to treat PTSD, depression, and addiction.