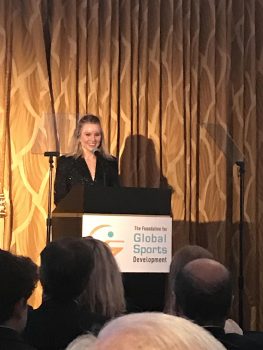 Last Saturday at the Waldorf in Beverly Hills ought have been a somber afternoon—23 gymnasts who gave impact statements and testified during last year’s Larry Nassar trial, and Flairs gymnasts who survived abuse, were there to receive the organization’s prestigious Humanitarian Award.  Given the gravity of that situation, it might have been a heavy-hearted event.  However, the demeanor that prevailed was a mixture of respect and brightly projected hope.

Kristen Bell was there to present, ESPN’s Josina Anderson was there to host, gold medalist Dominique Moceanu-Canales was there to advocate for survivors of all forms of abuse, and founders Dr. Steven Ungerleider and David C Ulich were there to laud these remarkable athletes for their courage in speaking out and upending the previously rampant abuses in the sport.

Moceanu told THT that she’d been waiting for this moment for over ten years.  At the time she’d spoken out about abuses she’d suffered as a young gymanst—and no one was listening. “I’m so humbled to be able to be here and to support the survivors of Larry Nassar,” she said.  “I’m here to support you guys, and you deserve this and I’m happy for you guys.

Moceanu-Canales says it was a long journey, from the time she spoke out, to today—a world in which abuse survivors are believed and supported from the outset.  “For the first 8 years, I felt so alone, and I hit a very low point,” she said.  “I started to wonder if it was ever really going to come.  I’ve waited so long for this to get attention. Now it finally has, and the last two years has been an emotional roller coaster.”

The highly decorated gymnast says now it’s time for some peace and closure.  “Now it’s coming full circle, and now people are understanding that yes, we should have looked into this years ago,” she told THT.  “Now it’s out there, now things are happening, now people are listening.  And that’s important.  I’m so thankful these girls are being honored.” 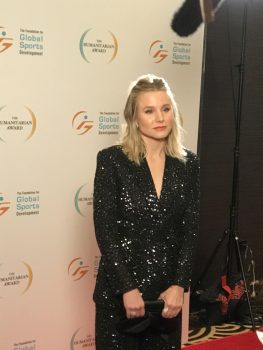 Kristen Bell arrived in a classically tailored, glittering black suit to host and present the award.  Bell told THT that the Foundation goes above and beyond in providing young athletes a better life and career, and in providing opportunities in sports to begin with.  “I think the Foundation For Global Sports Development allows kids all around the world to experience sports, which in turn teaches them teamwork, integrity, courtesy, and community.  There’s really not a bad aspect to sports, and the foundation makes sure everyone has a chance to experience it.”

Bell admitted that it was “more difficult” to prepare to host an event that dealt with such sensitive issues, but that the prospect of honoring these brave athletes was exceptionally motivating.

“Personally, I tend to have a more positive outlook, even in the face of really bad behavior,” she said.  “So I wanted to bring a little bit of lightness, and reverence and encouragement to these girls that have done so much.  Right after survivors speak out, there’s a period where the public doesn’t quite know what to do.  I’d like to cut that time in half and get right to celebrating.”

The emotional ceremony wasn’t simply about looking back, however—the Foundation has also designated $1 million to develop and implement a national abuse prevention education program.  And that makes for a brighter future for all young athletes.

To learn more about the event, and The Foundation for Global Sports Development’s mission and activities, visit www.globalsportsdevelopment.com.