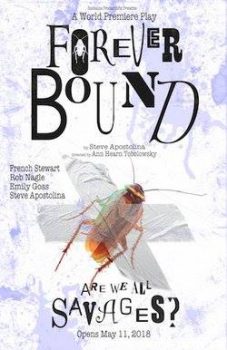 Los Angeles, CA (The Hollywood Times) 5/27/18 – Award-Winning Playwright, Steve Apostolina’s controversial comedy “Forever Bound”, casts a net and holds you on the edge of your seat till the very last tick, World Premiere at Atwater VillageTheatre.

I’ll tear that big toe nail off if you don’t tell me!!”, raged Shep a rare priceless book selling,  vigilante-like draconian, well-meaning knight in shining armor wanna be. He  is deftly portrayed as a heartfelt but easily riled hot head by award-winning playwright Steve Apostolina in his comedic masterpiece, entitled, “Forever Bound”.  Shep vaguely mirrors the famous Oscar Madison character, which the late great Jack Klugman breathed life into during the legendary ABC comedic sitcom, “The Odd Couple”‘s during its glory days during the 70’s. 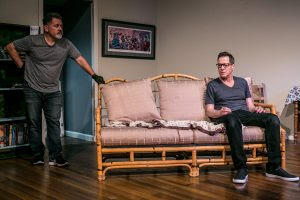 Steve Apostolina’s theatrical gem, where Shep’s reign of terror lives, screening at Atwater’s Village Theatre, from May 11-June 16, 2018, makes the suggestion , according to Apostolina, “You see, we are all savages”.  Apostolina holds you in the grip of a spell binding performance, as Shep, pal of a slightly neurotic, sheepish, introverted, mousey  character named Edmund, portrayed by French Stewart (3rd Rock from The Sun). Edmunds, I can’t event kill a cockroach personality— is juxtaposed with Shep’s,  let’s-get-it done-by-any-means-necessary vibe, makes for comedic yin and yang magic!!

Not only masterfully but also, pulse poundingly, aided by the synergy and mystery exuded by their talented cast members, Emily Goss and Rob Nagles, (Criminal Minds and NCIS), respectively, Stewart and Apostolina, takes the audience on a gritty ride. Their scenes galvanized by their stellar creative squad consisting of scenic designer, Pete Hickok, lighting designer, Bosco Flanagan, sound designer, Michael Lansche, Costume designer, Janice Coyote, “dramaturg”, Kevin Delin, and the production stage manager, Amanda Souter, manipulated lighting, strategically placed furniture and props, and framed changes in time, space, simulated locations, which affected mood. In fact, surprisingly enough, these dynamics took the audience on a trajectory traversing moral issues on decency, violence, sex, and most importantly, all the while they made the audience, laugh, cry, while, at times, simultaneously, grossing them out!

The Modus operandi of this hysterical wickedly funny is unveiled here:

While trying to save his pal Edmund from homelessness, and bankruptcy, Shep via Edmund’s precociousness, stumble upon a most wickedly and almost frighteningly repulsive revelation. The ensuing shenanigans, whereby the two men sought to shake off seemingly imminent intigentness, are nothing short of shocking, appalling hilarity. But why does Shep want to remove Nagle’s character’s big toenail….violently? Who is Emily Grossos’s character and of what significance does she exude? And the most zaniest question is why Shep tape cockroaches to Edmund’s walls?  And why can’t Edmund bring himself to kill these nasty insects? Why is Edmund broke?

Shockingly, Shep’s plan to create a windfall to help Edmund pay his rent will work but what will it entail?  Is it legal? If not , then on what moral or legal grounds? What will it cost them? How will it affect each of them ? These scintillating issues will come to a blindingly screeching heads on , shocking, and unnerving epiphany.

This Sankalas Production, directed by Ann Hearn Tobolowsky (THE DOLL MAKER), In my opinion has all the markings of an epic comedic gem. In fact, Apostolina, said his play is an homage to David Memet’s American Buffalo and George Bernard Shaw’s Pygmalion.  In addition, Apostolina added, Shaw’s Henry Higgins says, ” You see, we’re all savages, more or less”. What better line to start a discussion?’)

Ain’t Too Proud To Rave About The Temptations Musical