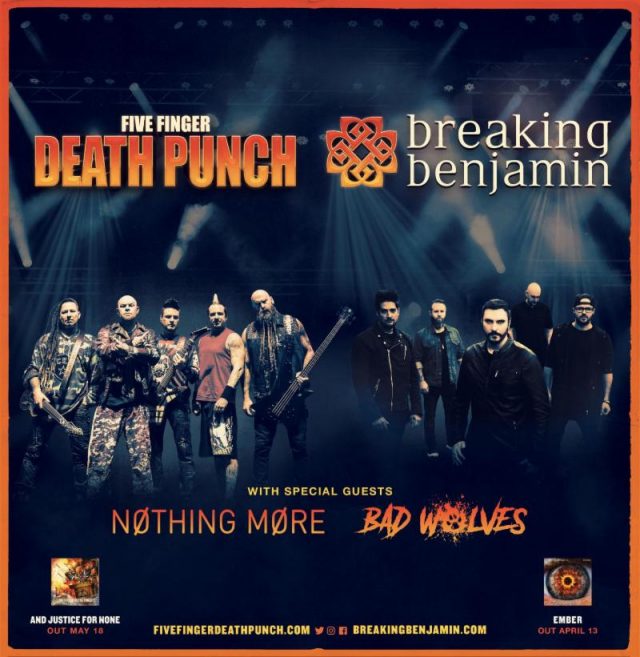 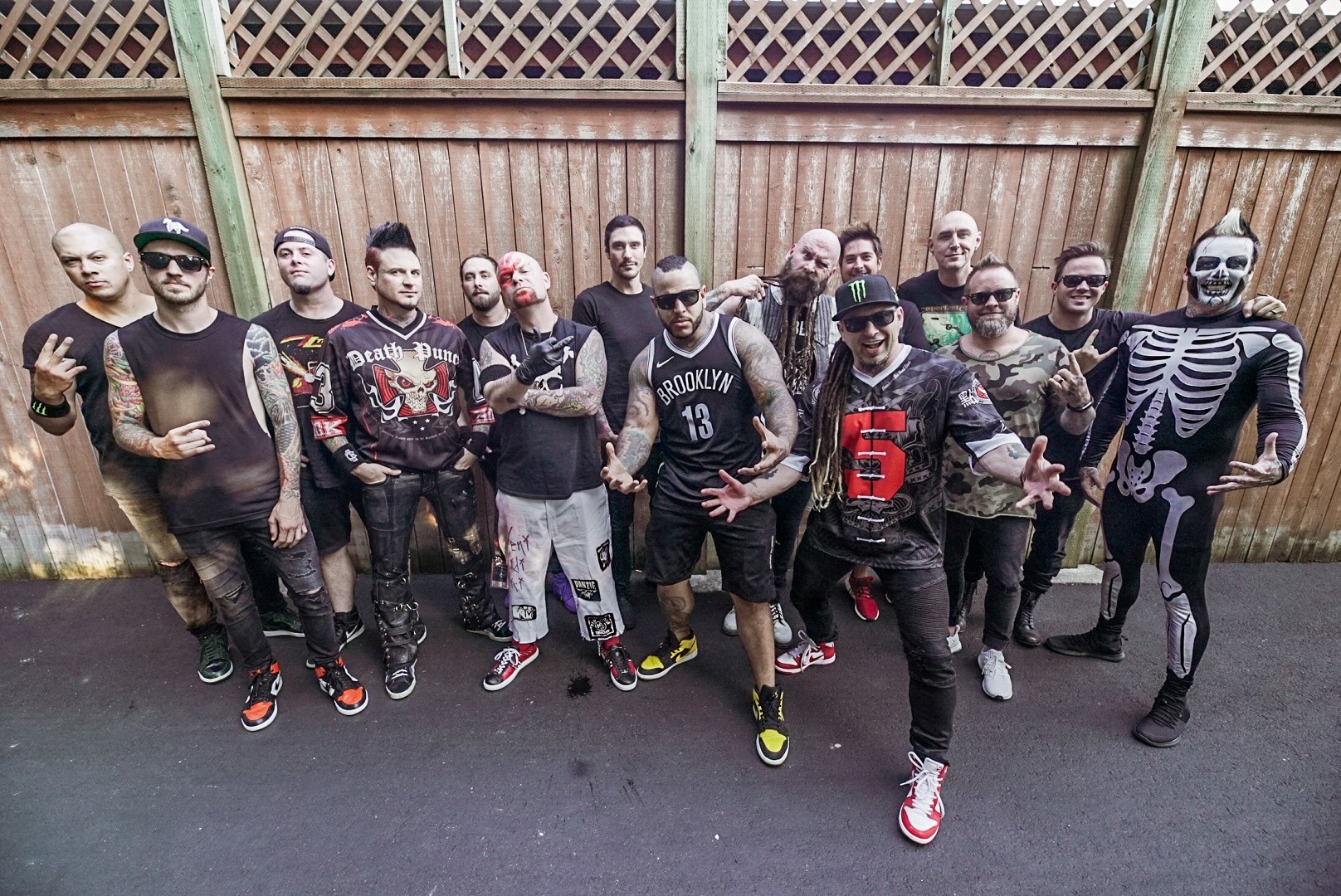 The summer tour comes on the heels of the co-headliners’ two new hard rock album releases which topped the charts this spring. The multi-platinum Five Finger Death Punch–who released their seventh studio album, AND JUSTICE FOR NONE (May 18) debuting at #4 on the Billboard Top 200 chart –and multi-platinum artists, Breaking Benjamin—whose sixth studio album EMBER (released April 2018) debuted at #3. 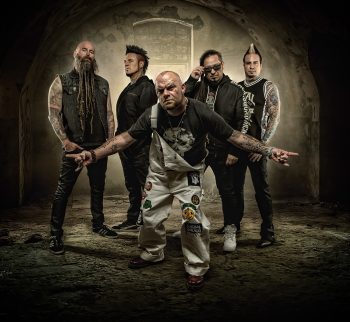 Five Finger Death Punch’s AND JUSTICE FOR NONE (released via Prospect Records), has sold over 100,000 albums and generated 100 million U.S. on-demand streams and over 250,000 US digital song sales. Fueled new single and video for “Sham Pain,” currently #7 at Active Rock and the Top 5 rock song “Gone Away,” AND JUSTICE FOR NONE marked the group’s fifth consecutive Top 5 album release. The album also had four #1 placements on other charts including: Top Digital Albums, Top Rock Albums, Top Hard Music Albums and AND JUSTICE FOR NONE is the #1 streaming Hard Rock/Heavy Metal Album of 2018. Produced by the band and Kevin Churko (Ozzy Osbourne, Disturbed) with And Justice For None, Five Finger Death Punch has once again stepped up their game maintaining their signature intensity, all while pushing themselves into new territories. Purchase AND JUSTICE FOR NONE or stream the album here: https://fivefingerdeathpunch.com. 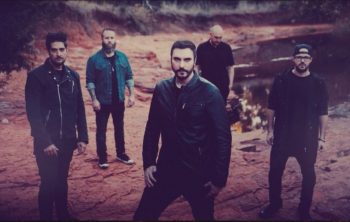 Breaking Benjamin’s self-produced sixth studio album, EMBER debuted at #3 on the Billboard Top 200 in late April, selling over 200,000 albums to date. EMBER is the multi-platinum band’s fourth Top 5 debut on the Billboard Top 200, following 2015’s #1 debut for Dark Before Dawn, 2009’s Dear Agony which debuted #4 and 2006’s Phobia which debuted #2. EMBER has already spun off a #1 hit at Active Rock Radio with “Red Cold River”, granting the band their 8th #1 single. The album’s latest single, “Torn In Two” has already amassed over 10MM streams and is steadily climbing the Active Rock charts from a current #12 position. 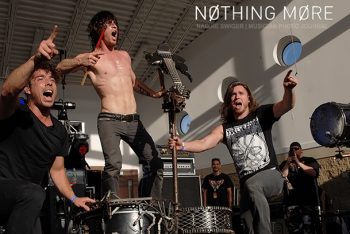 Nothing More released The Stories We Tell Ourselves (2017) and the album debuted at in the Top 20 of the Billboard Top 200 as well as earned the band three nominations at the GRAMMY Awards earlier this year-including “Best Rock Album,”, “Best Rock Performance” and “Best Rock Song” for their #1 hit single “Go to War.” The band’s live show is a sight to behold, featuring a 400 lb., 14-foot-tall instrument made from scrap metal, automotive and motorcycle parts. Hand-crafted by bassist Daniel Oliver, a self-taught welder and metal artist, looks and sounds like nothing you’ve come across and must be seen to be believed. Nothing More released their latest single, “Just Say When” in April 2018, featuring a captivating performance by Tate McRae (So You Think You Can Dance) and D’Angelo Castro (World of Dance) depicting the innocence of young love and the emotional weight of love lost. 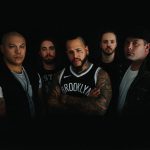 Bad Wolves released their debut Disobey, (May 2018) via Eleven Seven Music, achieved the #22 spot on the Billboard Top 200, #2 on the Hard Rock Chart, #4 on Rock, and #8 on the Top Current Albums Chart’. The global breakout single “Zombie” has been certified Gold in the United States and Australia as well as Platinum in Canada. The track has topped charts worldwide, including the U.S. iTunes overall and rock charts, Billboard’s Mainstream Rock Songs chart, Spotify’s Global Viral 50 chart, while also reigning atop the Active Rock radio chart for three straight week. The official music video, a tribute to the late singer Dolores O’Riordan of the Cranberries and an homage to the original, has garnered over 125 million views across platforms. On June 19, 2018, Bad Wolves presented a $250,000 check to Dolores O’Riordan’s four children, and with a promise to donate all of their proceeds. Bad Wolves’ current single “Hear Me Now” feat. Diamante is quickly climbing up the charts and already at #22 this week.

Fans purchasing a ticket to the tour this summer will also support a good cause. The co-headliners each will donate $0.50 from every ticket sold to two charity organizations close to their hearts. Five Finger Death Punch has chosen C.O.P.S – Concerns Of Police Survivors, an organization whose mission is rebuilding shattered lives of survivors and co-workers affected by line of duty deaths, through partnerships with law enforcement and the community. Breaking Benjamin has chosen Prevent Child Abuse America to help counteract the abuse and neglect of our nation’s children by promoting services that improve child well-being and developing programs that help to prevent all types of abuse and neglect.

Confidently leading heavy music in the 21st century, Five Finger Death Punch continue to make the impossible a reality at every turn. Since their emergence in 2007, the hard rock band has achieved six consecutive RIAA Gold-certified albums, three of which have gone Platinum since, as well as a Platinum single culminating in their 2015 #1 album GOT YOUR SIX, while at the same time being one of the top rock streaming acts with over 2 billion global streams to date. In 2016, the band also received the prestigious “Soldier Appreciation Award” from The Association of The United States Army. 5FDP frequently play all major festivals globally from Download to Rock Am Ring to Rock on the Range and sell out arenas around the world to countless screaming “Knuckleheads.” Their 2017 Greatest Hits album A DECADE OF DESTRUCTION boasts two new singles, amongst them “Gone Away”, a cover of the 1997 song by The Offspring which is currently storming the rock charts alongside their current single “Sham Pain.” 5FDP released their seventh full length album, AND JUSTICE FOR NONE on May 18 marking their fifth consecutive Top 5 album release. The band are currently in the midst of the biggest North American outdoor amphitheater rock tour of 2018 from July through September.

Multi-platinum band Breaking Benjamin has amassed a sizable and diehard fan base, both through their chart-topping music, as well as their electrifying live performances. Their latest album, “EMBER”, released in April 2018 debuted at #3 on Billboard’s Top 200 chart and has so far featured two successful singles, “Red Cold River” (peaking at #1 on Active Rock and giving the band their 8th #1 single), and the band’s latest single, “Torn In Two” (steadily climbing the charts from its current position of #12 at Active Rock). Their previous album, Dark Before Dawn certified GOLD (selling over 500K copies) debuted #1 on Billboard’s Top 200 chart and spun off two #1 rock tracks, “Failure” and “Angels Fall.” “Failure” was also named the most played song at Active Rock for 2015. 2009’s Dear Agony, certified PLATINUM (selling over 1MM copies) debuted #4 on the Billboard Top 200 and #1 on the iTunes Rock Album Chart. Dear Agony also spun off the platinum selling and #1 Active Rock single “I Will Not Bow” where it stayed #1 for five weeks straight. Their discography also includes 2002’s Saturate (certified GOLD), 2004’s We Are Not Alone (certified PLATINUM) 2006’s Phobia (certified PLATINUM.) We Are Not Alone spawned a pair of #1 radio hits (“So Cold” and “Sooner Or Later.”) Phobia debuted at # 2 on Billboard’s Top 200, hit #1 on the Rock Album Chart and was one of the top 50 selling rock albums of 2006. It featured one #1 and two Top 5 rock radio hits (“Breath,” “Diary of Jane” and “Until The End”.)

Nothing More’s The Stories We Tell Ourselves (out now on Better Noise Records) met with breakout success in 2017, debuting at #15 on Billboard’s Top-200 Album Chart. Further week-of-release debut highlights included: #2 Billboard Independent Album Debut, #3 Billboard Rock Album Debut, #3 Billboard Alternative Album Debut, and more. Nothing More entered 2018’s 60th Annual Grammy Awards® as first-time nominees and the most-nominated act in rock for The Stories We Tell Ourselves and #1 hit single “Go To War”. The group is now poised for global mainstream success with the upcoming single “Just Say When (version 2.0)” and continued global touring.

Consisting of vocalist Tommy Vext (ex-Divine Heresy), drummer John Boecklin (ex-DevilDriver), guitarist Doc Coyle (Vagus Nerve, ex-God Forbid), guitarist Chris Cain (Bury Your Dead), and bassist Kyle Konkiel(ex-In This Moment), Bad Wolves burst onto the scene in 2017 with the self-released debut single “Learn To Live” and quickly became ones-to-watch. The Los Angeles-based five-piece recently signed to Eleven Seven Music and released their debut album in May 2018. Their debut album Disobey features “Toast To The Ghost” and their hit cover of The Cranberries’ seminal single’ “Zombie”, released in honor of Dolores O’Riordan, who was scheduled to record guest vocals on the song the day she passed away. “Zombie” went viral globally, garnering the attention of Howard Stern at radio and mainstream media across the world and racking up millions of views across platforms with the official video amassing 150 Million views across YouTube and Facebook. The track currently sits atop rock and metal charts around the world. All proceeds from the track will go to Dolores O’Riordan’s three children. Disobey, debuted at #22 on the Billboard Top 200, #2 on the Hard Rock Chart, #4 on Rock, and #8 on the Top Current Albums Chart, Bad Wolves have proven themselves to be the global breakout band of 2018.

Moja Is a Saga That Keeps You Moving