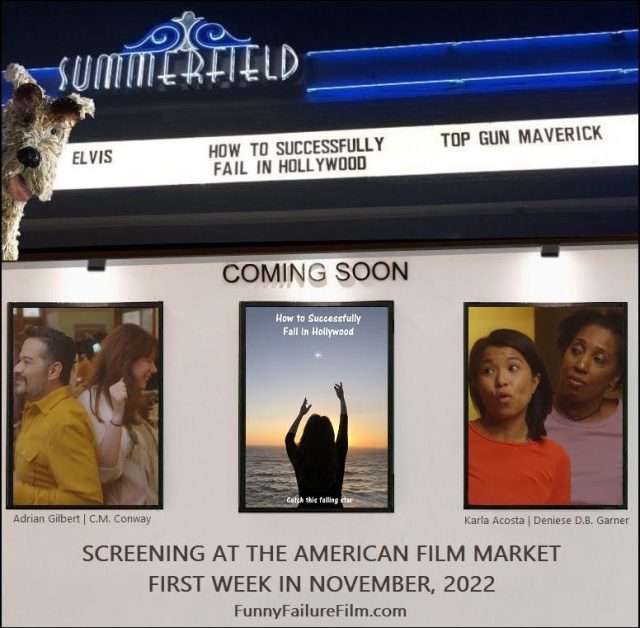 Does Hollywood have a sense of humor?

Fresh off the heels of her lively film debut and press tour in Northern California, Bay Area first-time filmmaker C.M. Conway is about to find out. Her groundbreaking new film “ How to Successfully Fail in Hollywood” is poised to screen at the American Film Market (AFM) in Santa Monica the first week of November, for the entertainment industry’s top movers and shakers.

The event is a remarkable full-circle moment, as her bootstrapped indie about friends, fantasies and fails is inspired by her (mis)adventures as an actress in Los Angeles. Attendees at the screening and  AFM can also take fun photos with Cassie, the fantastical dog in the film created by Nancy Winn.

The witty and poignant film is a social agent of change, breaks barriers and embraces colossal failures; while authentically representing the LGBTQIA+ community. A champion of gender equity and diversity, the movie was shot on a shoe-string budget in the Bay Area and Los Angeles, including in front of the iconic Hollywood Sign. A community grassroots effort of a skeleton crew, large cast and local businesses providing locations made the film possible. Award-winning cinematographer Lisa Stoll and sound recording veteran Daniel Hess were key crew and mentors.

Beneath the tales touting how to succeed in Hollywood, hides the crucial information of what NOT to do. That’s where the gold is buried, uncovering the pitfalls and pratfalls. Time to unearth the treasure. A cinematic ode to the 95% of struggling artists trying to make it against all odds, on their terms; while navigating truth, fantasy and identity in Tinseltown.

Who better to tell this story, than those who know Tinseltown the best – the outsiders.  Because face it, failure is funny. Especially when it’s not happening to you.

Synopsis: Ellie (C.M. Conway) is a bottom-feeder actress at the end of her rope in Hollywood, when a life-changing event happens with her gay, Latinx friend, Ben (Adrian Gilbert). A surreal twist unfolds with comedic results, blurring the lines of fantasy and reality, as she unwittingly becomes the key to a new take on Tinseltown where failure is the star. Their queer friends Kiki (Karla Acosta) and Dee Dee (Deniese D.B. Garner) help guide the way, mouths agape. The race is on!

Who/What: “How to Successfully Fail in Hollywood” to screen at the American Film Market.

The American Film Market is the most efficient film acquisition, development and networking event in the world. More than $1 billion in deals are sealed every year — on both completed films and those in every stage of development and production. Thousands of industry professionals from more than 80 countries converge in Santa Monica every November. At AFM, participants can discover the entire global catalogue of available films and projects, attend 30+ world class conferences and panels, and connect with the independent film community’s decision makers.